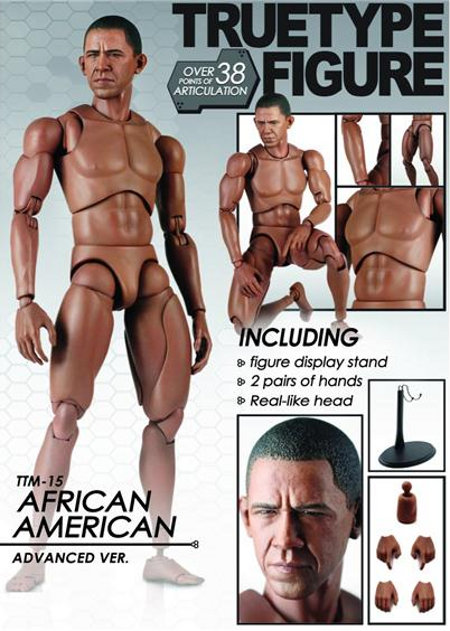 While nothing on the packaging says it outright, we all know who the skull of the African American Advanced TTM-15 action figure has been modeled from. It’s the true leader of the free world. If you guessed Oprah Winfrey, you’re right. Congratulate yourself.

Complete with 38 points of articulation, you can now put The President in play any way you wish. Have him walking through your Lego replica of New York City, destroying infrastructure and climbing towers. Pit him in a UFC octagon against a Brock Lesnar model and find out who truly is the baddest man alive. Sit him next to Barbie and watch him charm that blonde faster than Ken can flex a muscle like his life depended on it.

The African American Advanced TTM-15 is a 1/6th-scale TrueType Male Body that appropriates Obama’s likeness for its sculpted head. We don’t know how this thing can be legal, but it really is on sale. I guess since the toy doesn’t say who they modeled outright, they can get away with the impeccable resemblance, which doesn’t end with the head, by the way. Even the muscular body and the abs are quite reminiscent of that photograph of the big man showing off his physique.

Features include a newly-developed body with “over 38 points of articulation,” two detachable neck styles, detachable thigh muscles (so you can give him chicken legs) and two pairs of bendable hands (one relaxed, the other designed to hold a gun). It weighs 1.19 lbs and should be compatible with toy clothing designed for 1/6th-scale TTM figures.

When you realize your GI Joes and Transformers need a leader, you may just be looking at the man for the job. The African American Advanced TTM-15 expected to arrive in the third quarter of 2010, priced at $44.99.