Barbiefoot Is Cute, Pink And Creepy As Only A Barbie Foosball Table Can Be 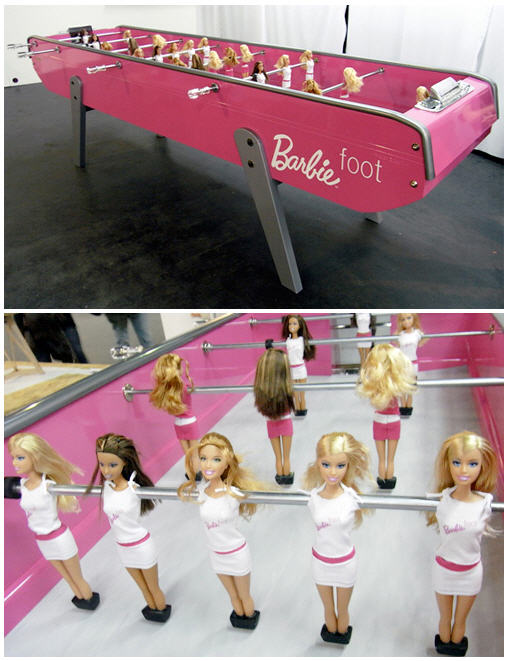 We know you like foosball – everybody loves that game.  Now, we also know you either like or hate Barbie.  Throw in the two together and you get the Barbiefoot, an otherwise regular “table football” setup with one twist: the non-descript armless plastic characters have been replaced by Barbie dolls with missing upper limbs.  Oh yeah, it’s pink.

If you’ve been seeing a rather discomforting upsurge in Barbie stuff the past few months, don’t be afraid. The year just happens to be the doll’s 50th anniversary on the planet, which makes it acceptable to fashion everything imaginable into having some form of tie-in with the Mattel product.  In my opinion, this game table has been the best Barbie-branded contraption we’ve seen all year, the type that can make you feel delight and displeasure at the very same time.

The delightful part is obvious as it’s Barbie on an 80-year old tabletop game – how much cooler can you get?  I can only bet this will fetch a pretty penny.  But why would it foster an unpleasant feeling?  Well, the dolls have been fairly mutilated, with their arms removed (to make way for the control sticks) and their ankles cut off (to make the long legs fit into a standard-height foosball machine).  That’s right, Mattel gave the thumbs up to do what every budding serial killer has done to Barbie all these years and it gives me the shivers.  No matter how you spin it, there’s something creepy about a smiling doll with no arms and cut-off legs, especially when there are 22 of them in one table.

If you’re wondering about the Barbiefoot name, the French name for foosball is babyfoot.  Being the work of French designer Chloe Ruchon, the name makes perfect sense.  It was created as a design piece only, in partnership with both Mattel and foosball makers Babyfoot Bonzini, although I’m pretty sure you can ask them to make one if you’re willing to part with the money.