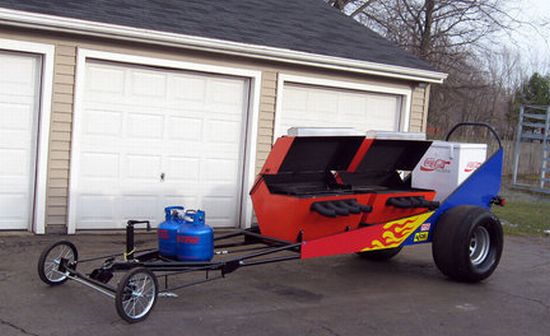 Despite its top fuel dragster looks, the BBQ Dragster isn’t designed to hang with racers competing in NHRA events. When you’ve got a hankering for some beer and steaks, though, this odd-looking vehicle with two large grills on top is exactly what you’ll be running for.

Created by Tom Gasper, a design engineer for Tavens Container and an after-market fabricator of car parts for Pro Street Customs, the unusual barbecue setup has been in the works since October, when he came up with the idea while talking with one of his customers. While originally just a summer project put together in his Strongville garage, it has basically spawned a new business for him: a mobile concession stand called Top Fuel Dragster.

The BBQ Dragster is built on a 16-foot slingshot dragster frame on four wheels, duly outfitted with a big grill, a flat top griddle, a condiment station, a refrigerator and a freezer. Since it can’t run on its own, you will have to fold the front wheels, which turns the whole thing into a street-legal trailer. That’s right, you can hook it up to a truck and set up a barbecue shop by the side of the highway. At least, until the cops come to arrest you.

An instant hit, the setup is already booked to sell food and drinks in at least ten shows during the summer. From looking at the official website, they’re looking at making the dragster the start of a larger enterprise too, such as a non-mobile Top Fuel Diner and making custom BBQ Dragsters for others interested in setting up a similar business.