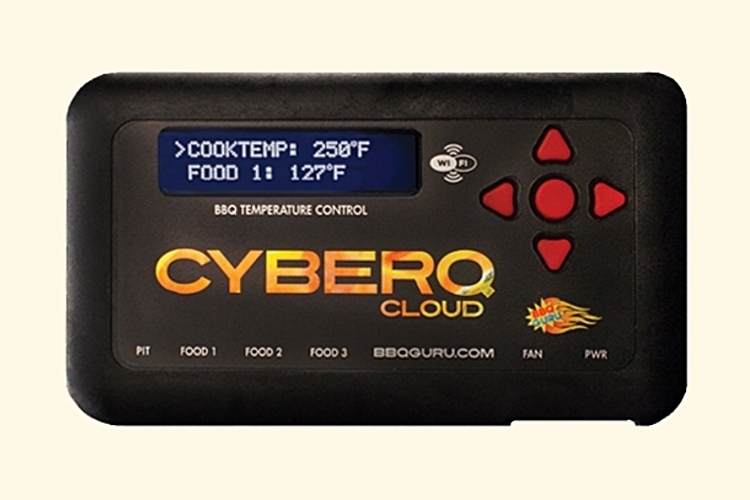 We’re big fans of BBQ Guru’s temperature controllers, which can automatically adjust the heat levels in your charcoal grill, allowing you to cook all your meats perfectly without having to keep an eye on them the entire time. Their newest model, the BBQ Guru CyberQ Cloud, updates their controller with even more modern conveniences.

Designed for compatibility with most charcoal grills in the market (the website lists over 200 models), the device will track the temperature of your grill and the food you’re cooking in real time, automatically adjusting the heat to bring it up or down to the ideal levels. As with previous models, it’s designed to work with a fan, which it powers up or down to compensate for whatever heat adjustment is required during cooking. Do note, a fan isn’t included, so you’ll have to purchase one (or two, if you have a large grill) of the outfit’s grilling fans separately.

The BBQ Guru CyberQ Cloud Temperature Controller comes with two sensors: one for the fire pit and another for the food. To set up, simply install the sensor on the pit, stick the food thermometer into the meat, and hook up the fans to the corresponding connectors. That’s it. From there, you just define the desired cooking temperature you want directly on the device itself (it comes with onboard controls) and let the controller manage everything. You can monitor up to three different food items, by the way, as it has three available connectors, although you’ll have to purchase additional food probes separately.

Built-in Wi-Fi allows the device to hop on to your home network and post updates to the cloud, so you can check how your food is doing even if you ran out for a minute to do a beer run via the companion app. It can automatically send notifications during certain cooking milestones (e.g. when the food first reaches the desired temperature, when the food is done), so you can get a good idea of how a session is doing even if you’re in the living room watching the game. Oh yeah, you can also adjust the desired temperature from the same app, so you can have it shut down the grilling session without getting up from the couch.

You know how people like to check on the food by lifting the lid on the grill? Yeah, there’s a good chance people will do that while your food is cooking. Since that can tamper with the heat levels by bringing down temperature drastically, the BBQ Guru CyberQ Cloud Temperature Controller comes with the capability to detect when the lid is opened. If that’s the case, it will not boost fan speed to immediately stoke the fire as most controllers would do, instead simply adjusting ever-so slightly to get temperature back to desired levels without overheating the coals.

To ensure food is never overcooked, it also comes with a “ramp mode” that can detect when food is nearly finished. In that situation, the controller will actively work to lower the temperature in the pit, ensuring food stays tender and moist even if you get to it a little later because you enjoyed yourself a little too much during the quick trip to the mini-mart.