Your Very Own Robot Dancer: The BeatBots My Keepon 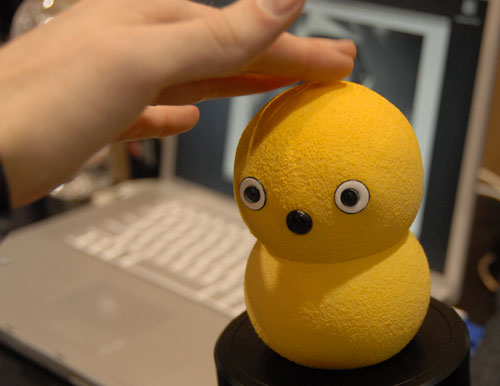 The Keepon Pro continue to be one of the most fascinating interactive robots ever built, but the $30,000 price tag has left it as an option accessible only to research institutions and wealthy bastards.  While it’s not exactly the same as the original squishy dancing robot, the much cheaper Beatbots My Keepon can do some of the most enjoyable talents the expensive research automaton is equipped with — it can respond to touch, recognize music beats and dance in rhythm.

Created with UK’s Wow! Stuff, the toy version packs just enough of what made the original such a darling.  Sure, they took out a lot of the stuff that makes it such a valuable tool for research in the field of social robotics and autism, but for your desktop entertainment, we’re almost sure the basic functionalities will more than suffice.

The Beatbots My Keepon is an entirely different machine than the original Keepon Pro.  According to the companies, Wow! Stuff’s designers and engineers (while keeping in close communication with Beatbots, of course) worked to replicate the most engaging features of the original in a much cheaper, mass-market robot toy.  Chances are, this won’t be half as good as you remember the original to be — still, toy makers surprise us every year with what they can produce, so it could end up being one of those things.

The My Keepon’s price point?  A much more affordable $40, making it a rather cheap toy for the entertainment value it can potentially provide.  Hopefully, we’ll see a video making the rounds soon, since the toy is currently on exhibit at the European Toy Fair in Nuremberg, Germany.