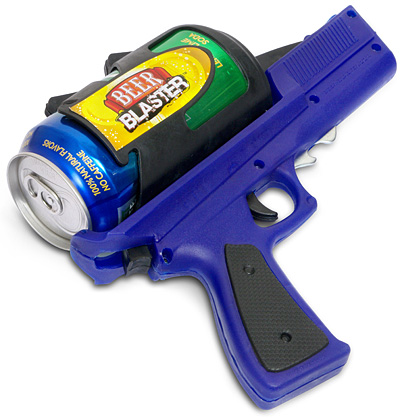 Why play with water guns when you can blast each other with a full load of beer?  That’s right, bathe your enemies in a putrid stench of brew and smell like the morning after a wild keg party with the Beer Blaster Liquid Shooter, a water gun designed to draw ammunition from a 12-ounce can of ale.

Able to shoot carbonated liquids out to distances of up to 10 feet, it paves the way for nasty (and sticky) close-range combat.  Simply shake an unopened can of beer or soda, load it in the gun and fire away, just like you used to, back when firing water pistols made for a satisfying afternoon in the park. 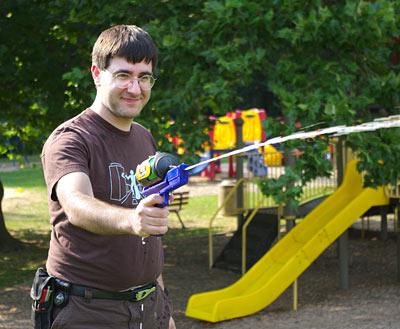 The Beer Blaster Liquid Shooter is a plastic toy that uses the carbonated beverage as both ammunition and propulsion.  It’s shaped like a real toy gun, with a trigger (to activate the spurt of liquid) and a loading area that fits in a standard soda can.  When you lock the can in, a small needle in the reservoir holder will automatically puncture it, creating an opening where the pistol will pull its projectile shots from.  The inebriating weapon measures 9 x 8 x 3 inches and comes fitted with a cap opener, in case you waste all the canned beer shooting each other and are left with nothing but regular bottles to get drunk from.

Do note that beer and soda should prove a terrible liquid to get all over your house, so keep the warfare outdoors (like drive-by shootings on unsuspecting sober folks and shooting beer fountains into your buddies’ mouths).  Beer, in particular, will stink so bad the day after, you don’t even want to try spattering it on anything indoors.  Seriously.

Thinkgeek has the Beer Blaster Liquid Shooter on retail for $22.99 a pop.