Beer In A Box: Coming To A Convenience Store Near You 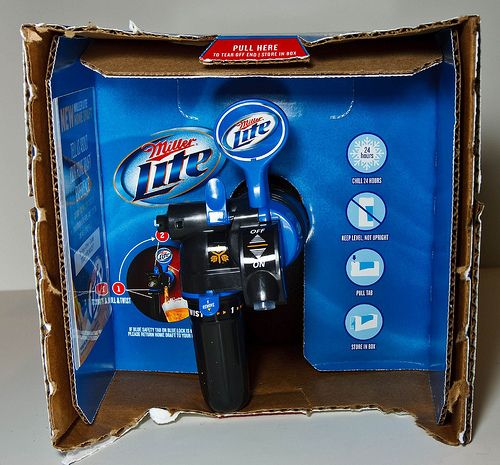 Draft beer fans all over the US will finally get their wishes fulfilled – beer from the tap, right in the comfort of your home.  That is, if MillerCoors pushes through with their plans of selling the new “beer in a box” nationwide.

Beer sales, as it turns out, are down this year.  When business is slow, companies get creative, for better or for worse.  Looking to tap (pun intended) into those 30% of beer drinkers (yep, I can’t believe it too) who prefer draft beer over the regular bottled variety, they’re filling 1.5-gallon containers encased in ugly boxes with cheap, watered-down swill.  An attached dispenser lets you fill up a glass, as if you’re in bar.

According to the company, the recyclable containers are meant to stay in the fridge, keeping cool, while you refill whenever needed.  Packing the equivalent of 16 bottles each, the brew can stay fresh for up to 30 days, when kept in this manner.

Price for the new product is $20 per box, which is a tad more expensive compared to the equivalent pricing for their bottled counterparts.  Considering that you can’t stock draft beer at home, anyway, and they’re reaching out to that particular market segment of tap-lovers, they just might end up with a good chunk of takers for the overpriced drink.

Boxes of Miller Lite and Coors Lite are currently available in several cities (including Dallas, Phoenix and San Diego), with intentions to expand nationwide by the start of the football season, if all goes according to plan.