Beer Nerd Board Game Puts Your Brew Knowledge To The Test 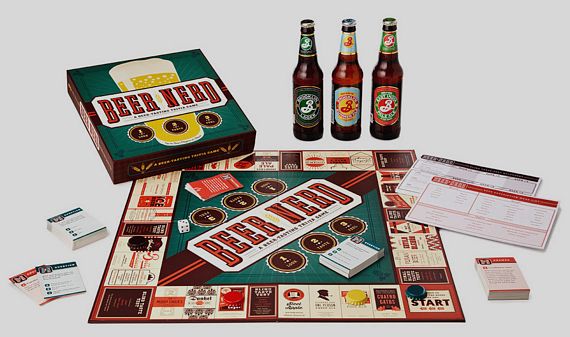 “I don’t have a drinking problem,” you tell people over and over, “I’m just a beer connoisseur.”  Deep down, you know it’s a lie  — you probably really have a drinking problem and just aren’t ready to fix it.  To keep up the facade that you’re some sort of connoisseur, you decide to learn everything you can about beer in an effort to transform yourself into a veritable human Wikipedia of malty brews.  How to do that?  Get yourself the Beer Nerd.

A trivia-based board game, it’s as great a way to beef up your stock of random beer facts without having to crack an actual book open.  That way, you can readily answer any well-meaning family member who dare challenges your “connoisseur” excuse with real information that should temporarily allay their concerns.

The Beer Nerd consists of a 10.5 x 10.5 inch playing board, with game pieces for up to four players and a thick pile of trivia cards for putting your ever-growing treasure trove of beer knowledge to the test.  For more competitive gameplay, the game also incorporates a blind taste test, although you’ll have to provide your own beers for that.

Basically, the Beer Nerd is a board game you can use with the rest of your beer-swilling friends, so you can get drunk on bottle after bottle of suds opened with a Cap Zappa, all while learning more about the history of the same wonderful sauce that you’ve each always felt has truly made your lives complete (don’t worry, I won’t tell the wife).  What could be more awesome than that?  It’s available now, priced at $35.