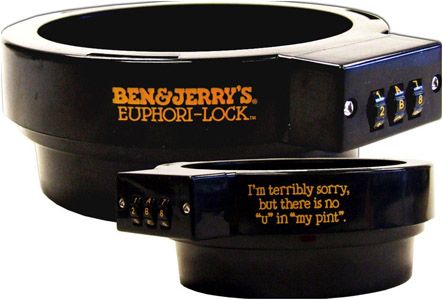 You’re tired.  Tired of buying your favorite pints of ice cream every Friday and having your roommates gorge on half of them before you wake up Saturday afternoon.  You’re tired.  Tired of holding yourself back from going full-blown gangster on their dessert-thieving ass.  And, as it turns out, Ben & Jerry’s knows full well you’re tired too and they have just the product for it: the Euphori-Lock.

Designed to wear over the cap of your pint of Cherry Garcia (or whatever your favorite Ben & Jerry’s flavor is), the gadget effectively locks the entire thing from unauthorized entry.  No, it doesn’t just fasten things tight to make opening the lid harder either — instead, it requires you to enter the right three-digit combination before gaining access to the frozen treat that lies beneath. 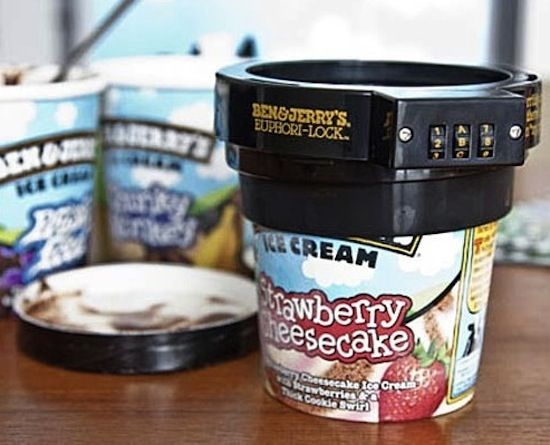 Surprisingly, the Ben & Jerry’s Euphori-Lock has actually been available since 2002, which means you’ve spent the last ten years being cheated out of ice cream that you could have kept all to yourself if only you knew better.  But that’s life, ain’t it?  A series of events that could have turned out better if you’d only known this one crucial detail.  And you’re tired of it!

The actual “ice cream pint lock” features a two-part plastic security ring to keep the lid on tight.  Unfortunately, there’s no integrated alarm system, so you won’t really know when someone’s trying really hard to figure out the code. Fortunately, there’s an integrated taser system that electrocutes whoever tries to get at your ice cream without authorization.  Just kidding about the last part — but, seriously, wouldn’t that be awesome?

The Ben & Jerry’s Euphori-Lock is available directly from the company’s website.  Price is $6.64.