Bendy Bike Can Wrap Its Frame Around Poles 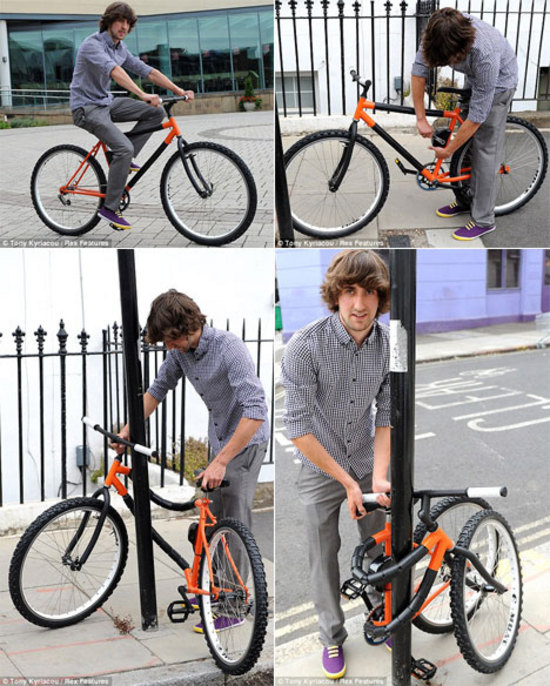 Bicycles are great.  Folding bikes, even better.  Now, a young designer is about to add a third type that just blows the mind: the Bendy Bike, a bicycle with a flexible frame that you can wrap around a pole.

Created by 21-year old Kevin Scott, the bike lets you do away with using a chain to secure it.  It’s not as malleable as to be bound into a knot (which would have been glorious), the body does manage to flex enough for the front and rear wheels to almost meet in the same spot.

The Bendy Bike uses segmented sections in place of the top and down tubes, allowing it to curve for wrapping around lampposts and poles.   Since commuting on a swaying bike would be impossible, a ratchet mechanism installed on the seat tube lets you crank the segments tight, creating a rigid frame for riding.

While it eliminates the use of an extra chain, you’ll still need to lock the bike once it’s bended around a pole.  To do that, you can use a padlock either on the wheels or on the frame.  As for security, the unique solution doesn’t sound any safer than a chain-and-lock combination.  However, it could be a pretty neat solution for more compact bike storage (you can tie it in your bedroom stripper pole – your neighbor said you own one, I swear).

Currently a prototype concept, Kevin is showing the Bendy Bike at the New Designers show in North London.  He is hoping that the unusual design can catch a financer’s eye to allow him to develop it further.