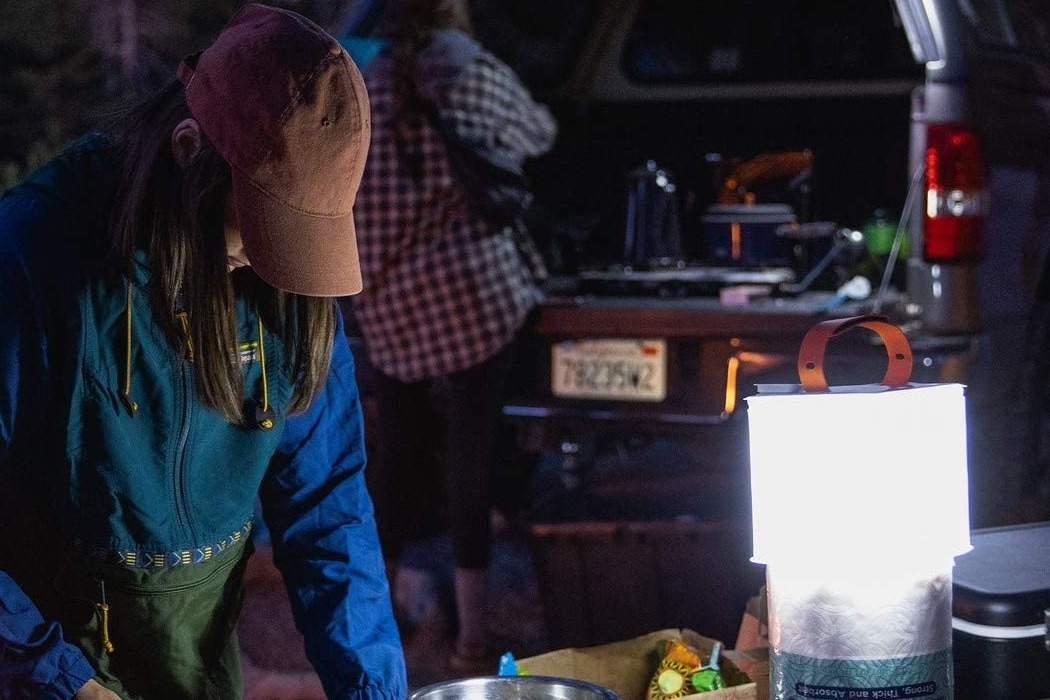 Ever went camping without a lantern? Not fun. Sure, you can make your way around with a flashlight, wear a headlamp, or even start a campfire for some ambient illumination, but a proper camp light that you can set down on the ground or hang up on a tree branch just makes things so much simpler.

Suffice to say, we think a good lantern is a campsite essential. At least, if you plan to do anything other than tuck it in and get a good night’s rest as soon as the sun goes down. With a good camp light, you can keep the campsite busy well into the night, as it lets you prep food, play games, and even do maintenance work on your gear without having to fumble in the dark.

All modern camp lanterns use LEDs, allowing them to produce plenty of brightness without the size or heft of traditional lamps. What usually sets them apart from each other are the accompanying features. Some will have multiple mounting options for versatile function around camp, while others will have a collapsible design that makes them easier to bring along during hikes. Some will have integrated solar panels for charging during the day, some will double as power banks, and so on. The camping lantern you get will depend on which of those functions you’ll actually find useful.

Here are our picks for the best camping lanterns today. 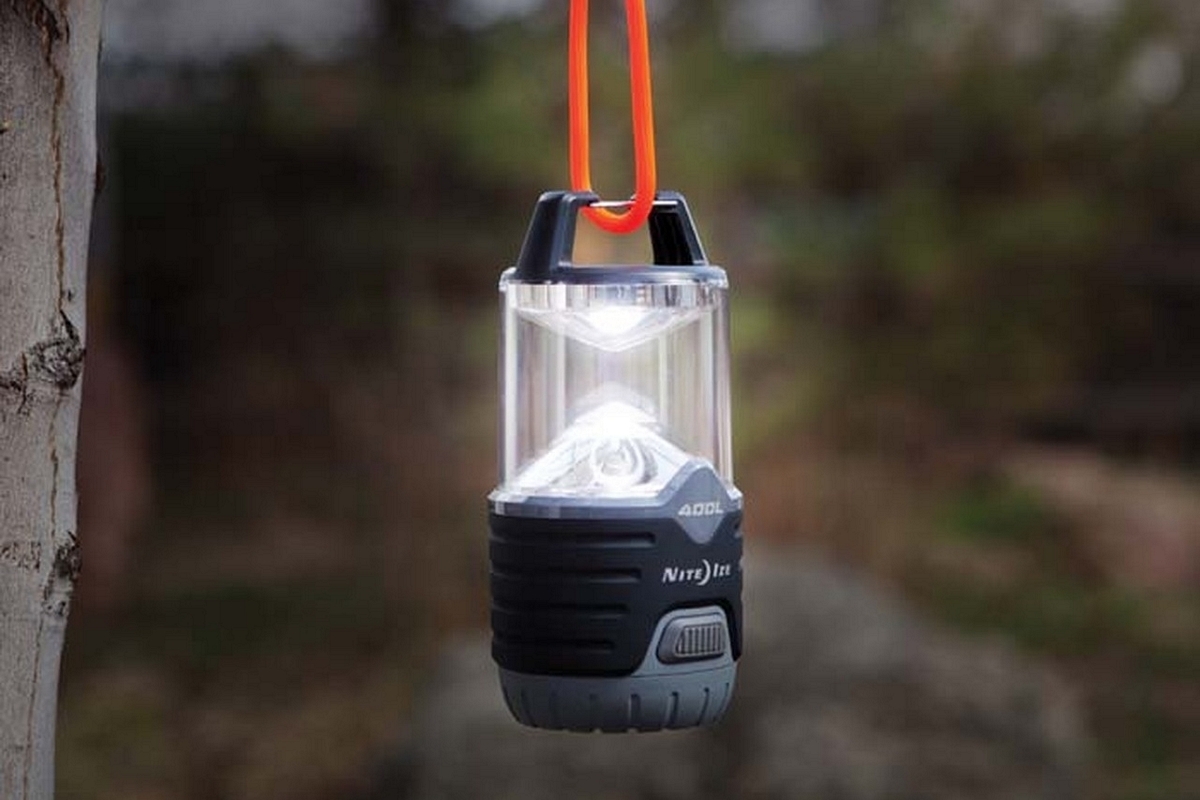 If you prefer using disposable batteries you can swap in and out during camping, this 400-lumen lantern uses three D-cell batteries that will allow it to blast out maximum brightness for up to 26 hours and at low setting (30 lumens) for up to 800 hours, so you can use the darn thing for an entire month. It’s got a durable and weather-resistant build that should handle the outdoors with ease, while the top handle doubles as a carabiner clip for easily hanging it on overhead fixtures. Even if you prefer a rechargeable lamp as your main lantern, keeping this on hand for emergencies is very handy simply because of how long it can stretch the lifespan of three D-cells. 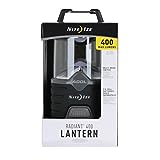 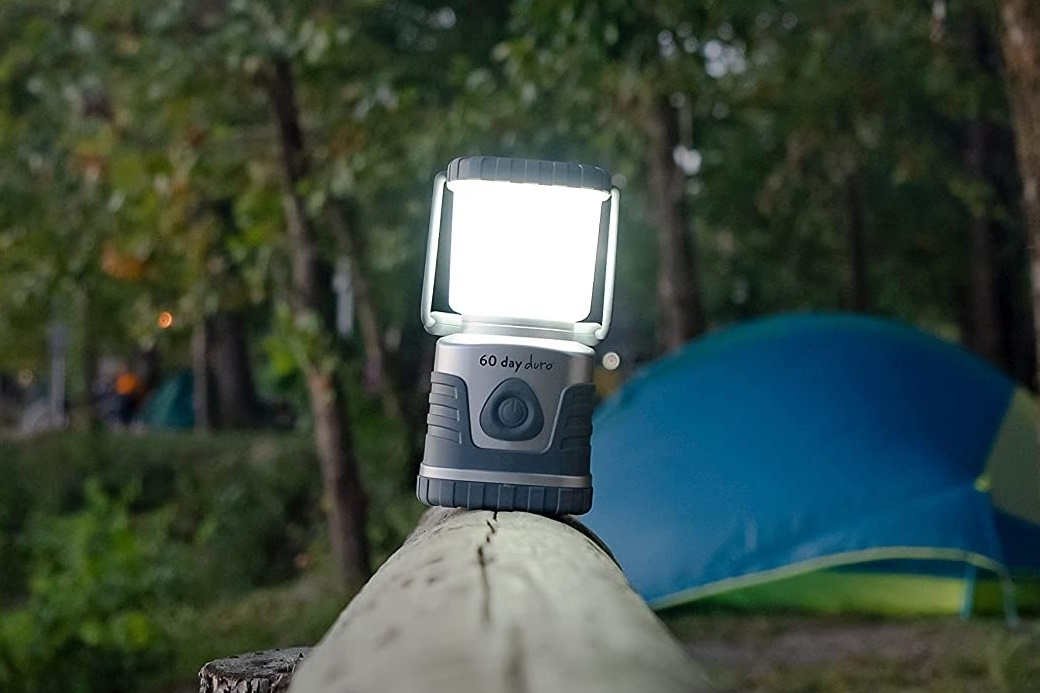 Want a camp lantern that can provide as much light for as long as possible? Pick up this “enduro” model, which boasts the ability to run for up to 60 days on the lowest setting (20 lumens) while offering 41 hours of illumination when shining at the maximum 1,200 lumens. That’s right, 1,200 lumens for over a day and a half straight. The catch? It’s not rechargeable, instead relying on six D-cell alkaline batteries to keep it running for that long. The lamp is also bigger than most on this list, coming in at 9.5 x 5 inches (height x diameter). Features include four lighting modes (including SOS), IPX4 water resistance, and a discreet hook on the base that you can use to hang it as a downlight fixture. 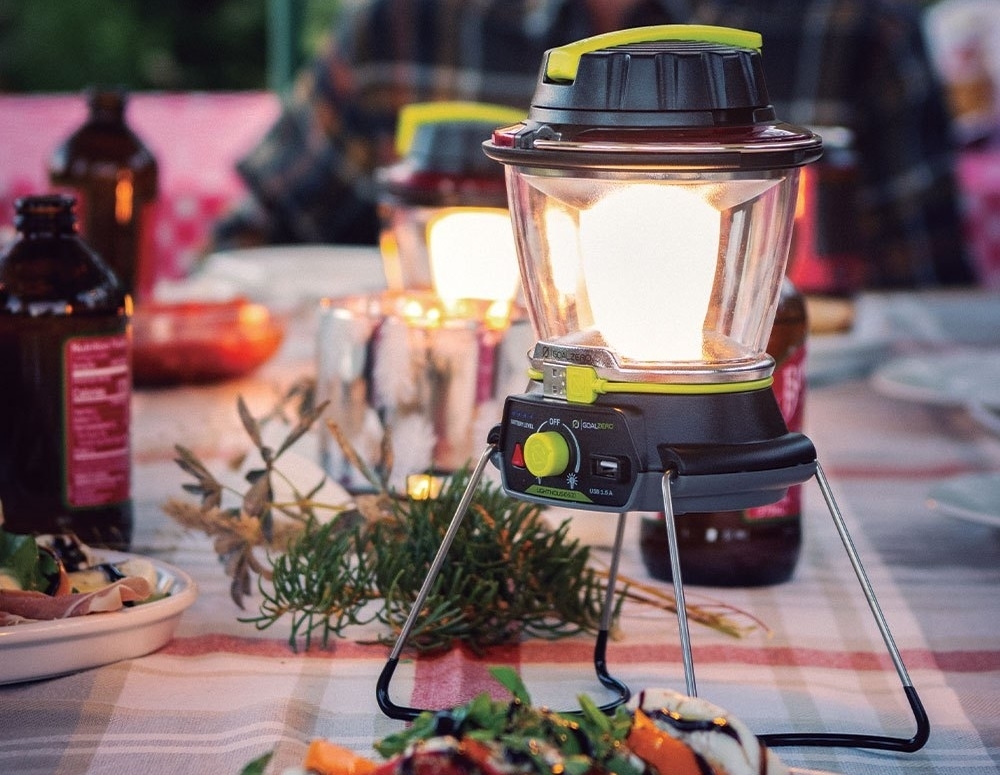 Beloved by many outdoor enthusiasts, this lantern comes with fold out legs that allow you to keep it stable on nearly any surface (even rocky ones), while those same wireframe legs allow you to hang it onto beams, branches, and hooks. With 600 lumens of brightness, it delivers enough illumination even for a big group at the campsite, with the option to dial down the intensity to make the charge last a bit longer. Speaking of charge, it can only shine the LEDs at full brightness for 2.5 hours between charges, although you can stretch it up to two days if you turn it down to the lowest setting. It offers both 360-degree and 180-degree lighting, so you won’t be wasting light where it’s not needed (using 180-degree doubles the runtime at the same brightness), and even comes with a pop-out hand crank, in case you need power in a pinch, with a full minute of cranking giving it enough juice to run for 10 minutes at the low setting. Other features include a charging port (you can charge your phone from its battery), a metal handle up top, and compatibility with the outfit’s line of solar panels. 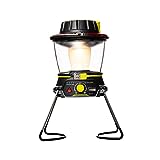 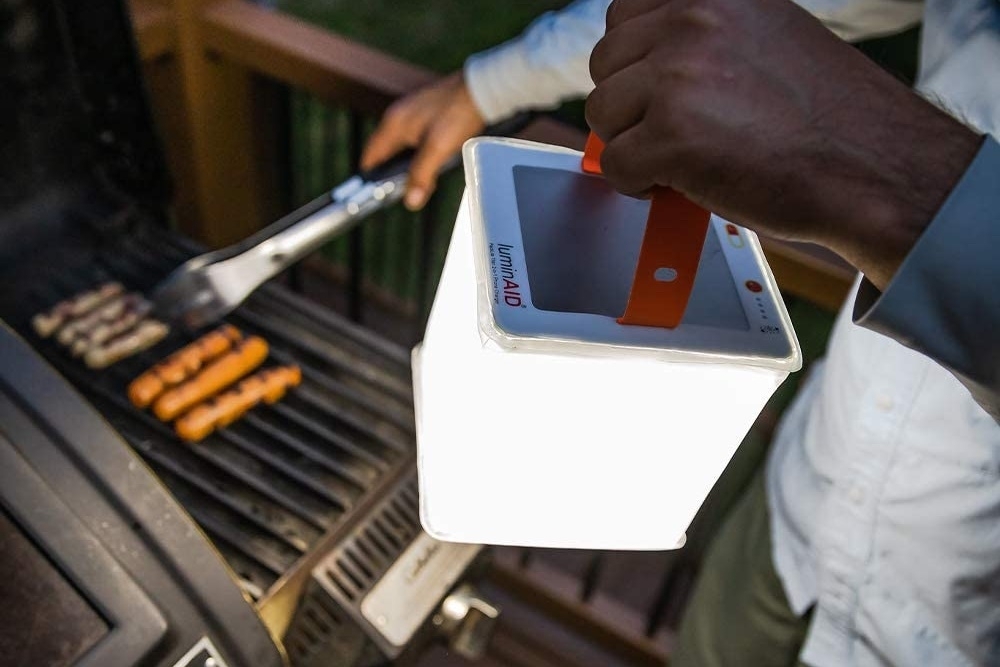 Designed for maximum portability, this inflatable lantern (it’s twist-to-inflate, so no need to pump air) deflates into a compact pile (6 x 6 x 1 inches) that you can stash inside your pack or squeeze inside an exterior pouch outside it. Suffice to say, this is one of the most convenient lanterns to bring when backpacking. It’s not the most powerful, delivering just 300 lumens at maximum brightness, which should be bright enough to illuminate smaller campsites (outfit estimates around 300 square feet of lighting area). The 4,000mAh battery delivers enough power to keep it illuminating for up to five hours at max setting and 100 hours on low (10 lumens), although it also offers a red light mode that’s gentler on the eyes if you want more subdued lighting for your nighttime activities. Features include a USB out for charging your phone, an integrated solar panel (full recharge in around 20 hours of sunlight exposure), and 10 light settings (five for white, five for red). 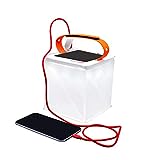 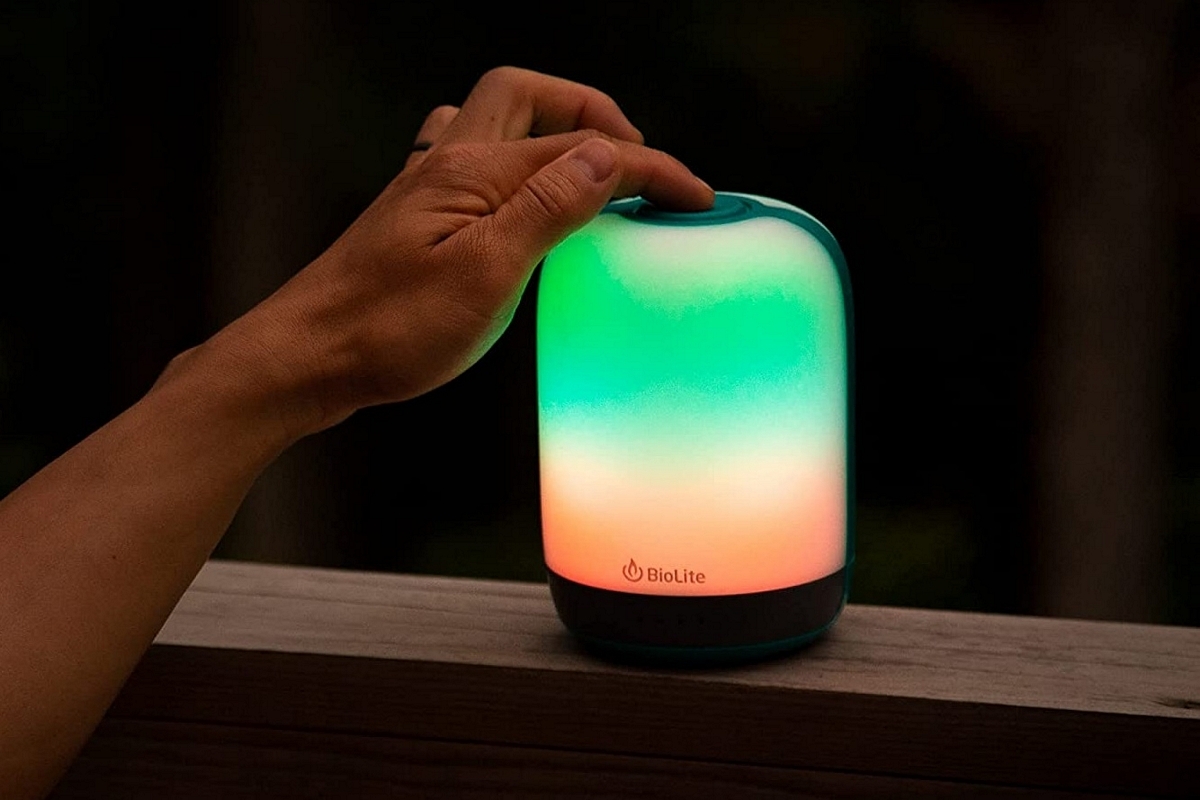 If you want a camping lantern that will deliver more than the standard illumination for your campsite, this just might be the lamp that completes your outdoor ensemble. It delivers 500 lumens of omnidirectional lighting that it can shine at full blast for up to five hours between charges, although you can turn it down to the lowest setting (5 lumens) to stretch that to 200 hours. Beyond those basic functions, though, the lantern’s multi-colored LEDs allow it to deliver fancy mood lighting at camp. There are options to simulate various natural lighting settings, such as early sunrise or gloomy evening skies, as well as any other color of lighting you want for the camp. There’s even a fireworks mode that makes it look like there’s a fireworks show going on right next to you and a candle glow that you can get by shaking the lamp. It’s one unique camp lantern in the best way imaginable. 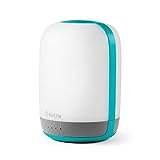 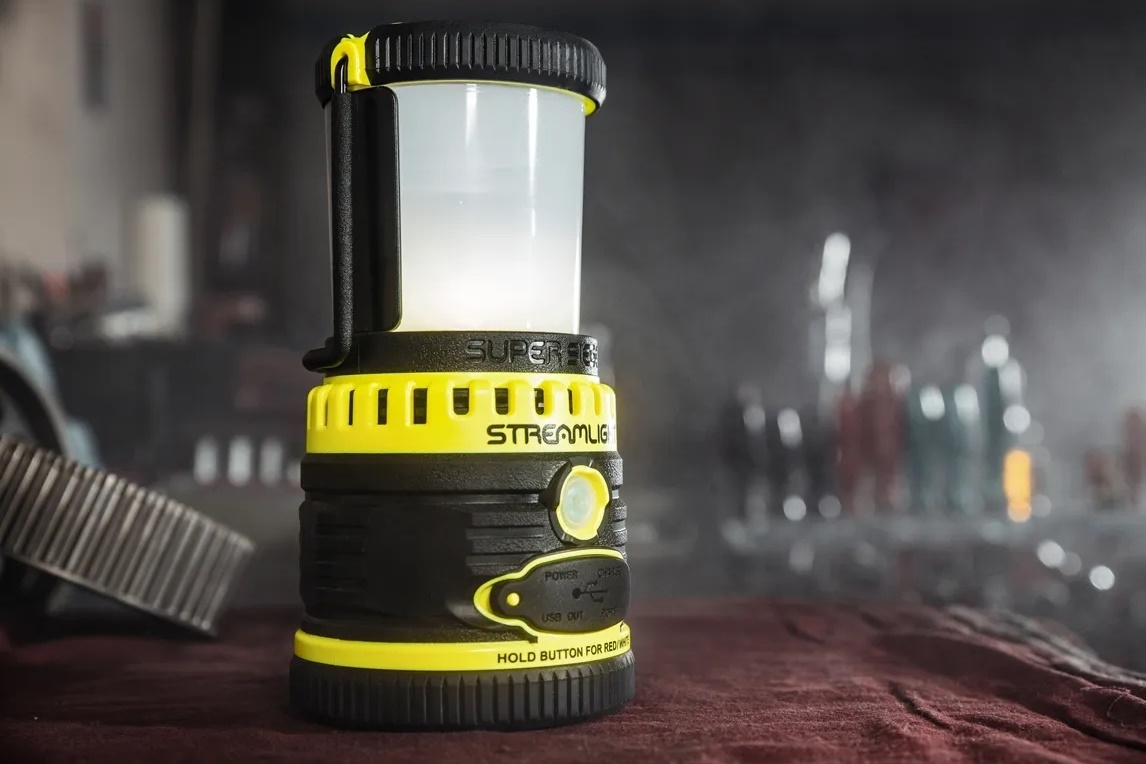 While it’s a bit on the expensive side, the Super Siege makes it worth the dent in your pocket by coming with both a high-brightness 1,100-lumen LED array and a large rechargeable 10,400mAh battery. This combo allows it to run on the highest brightness setting for up to 5.75 hours, at a medium 550 lumens for over 11 hours, and at the lowest 30-lumen setting at up to 36 hours. It also has a red light mode that can provide 140 hours of runtime at the highest setting, in case you just want the minimum amount of illumination to keep things visible at camp. On top of that, it’s built like a tank, with a tough polycarbonate thermoplastic construction that should handle drops and impact with nary a shrug, all while being IPX7-rated for waterproofing. Heck, it’s even designed to float when dropped in the water, making it the perfect campsite companion that’s ready for practically anything.