Best Carts and Wheelbarrows for Yardwork

Yardwork – it’s not fun. From the digging and raking to the lifting and hauling, it involves a lot of backbreaking work. If you have a big yard or do plenty of gardening, then you’re no stranger to moving loads across your property, which makes a wheelbarrow or some other utility cart an indispensable tool in your arsenal. While you can never go wrong with a conventional heavy-duty wheelbarrow, there’s a nice selection of yard carts out there that could prove better suited for different individual needs. Here’s a few choice ones we like. 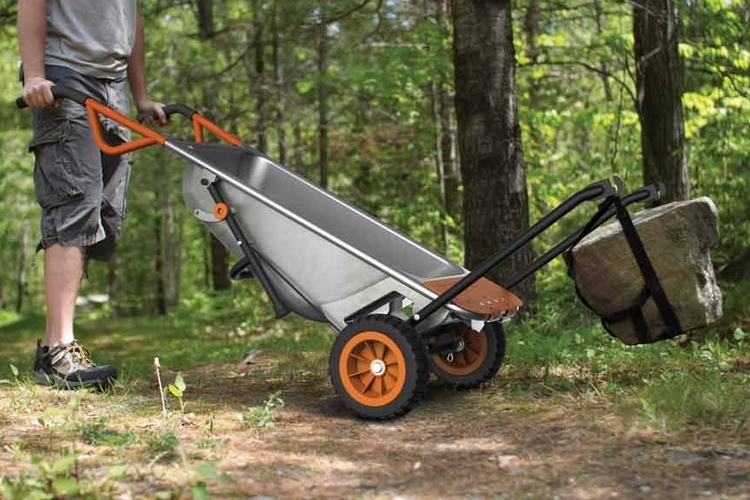 It looks like a conventional wheelbarrow, with a deep 3-cubic foot tub, dual oversized tires, and legs in the rear to help keep it stable. And the Aerocart works great as one, with the ability to carry 300 pounds of payload, all while sporting an ergonomic lift design that, according to Worx, can make a 200-pound cargo feel like a measly 17 pounds. Except, it has a flap out front that can flip-out parallel to the tub, allowing you to use it as a functional dolly with the same 300-pound capacity, as well as two fold-out arms for additional cargo loading options (you can strap payloads to the arms). They even offer optional kits that you can attach to turn the erstwhile wheelbarrow into a pull wagon and a snow plow, making it quite the versatile yard tool. 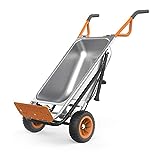 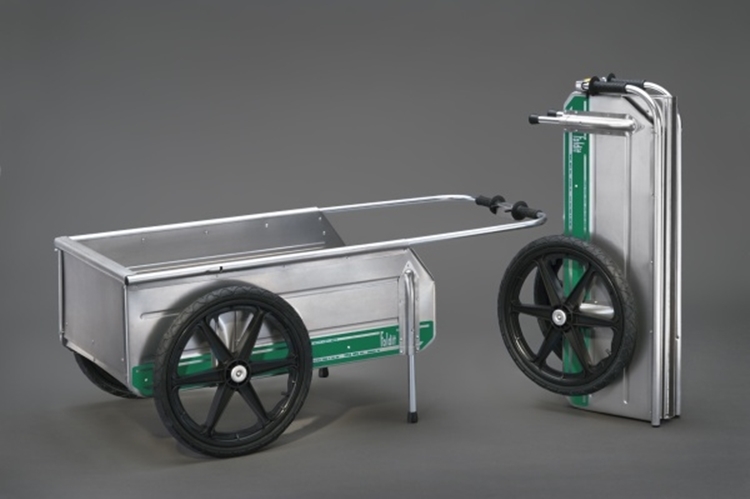 While it’s probably not as heavy-duty as a conventional contractor’s wheelbarrow, Tipke’s all-aluminum Fold-It Utility Cart is reinforced enough to haul payloads of up to 330 pounds, all while collapsing flat for storing inside a cabinet, under furniture, or in the boot of a car. Sporting 20-inch wheels with pneumatic tires, it’s mobile enough to handle any lawn or backyard, while a removable front gate makes it easy to load and unload cargo. There’s even an optional hitch that allows you to attach it to a lawn mower for even more convenient handling. 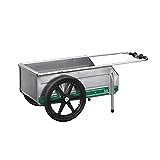 Tipke Manufacturing Company Foldit 2200 Do It All...
Buy on Amazon 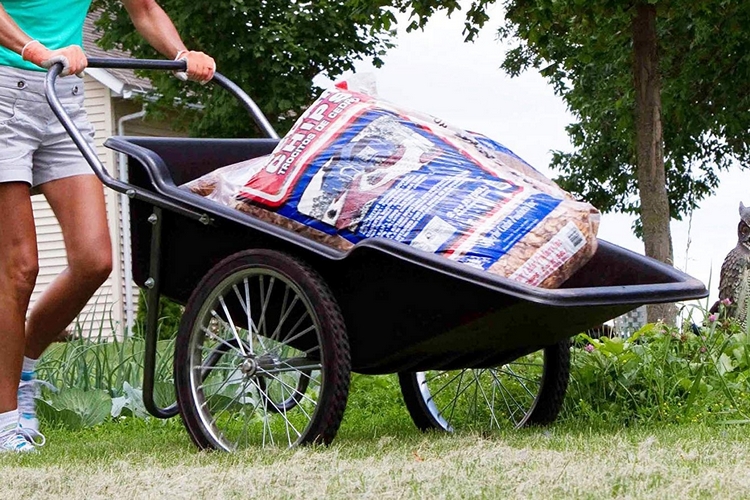 With 10 cubic feet of room and a 400-pound payload capacity, this semi-traditional wheelbarrow can be used to haul everything, from rock and mulch to firewood and all sorts of supplies. It has 20-inch spoked wheels that look more at home on a bicycle than on a wheelbarrow, but should be perfect moving things swiftly on lawns and backyards (avoid dragging it over rocks, though, as those wheels look like they can take damage there), apart from giving you plenty of leverage to make heavy loads feel just a little bit lighter. The whole thing weighs a beefy 49 pounds, by the way, despite having a tub made of high-impact plastic, so it’s on the heavier side of the spectrum. 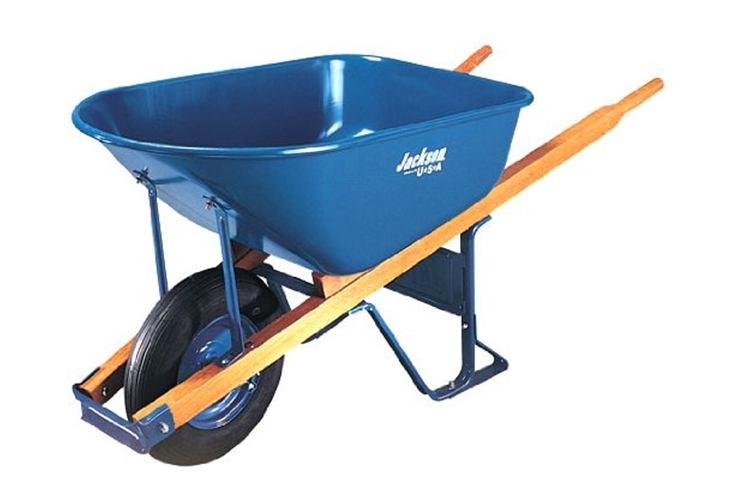 Designed with contractors in mind, this heavy-duty cart sports traditional wheelbarrow elements, such as a single wheel design, a tub cut in heavy-gauge seamless steel, and multiple reinforcements all throughout. A large tube tire and stable rear legs make moving heavy loads straightforward even on uneven terrains, while a tipping crossbar in front of the tire gives you a stable fixture to use when unloading very heavy payloads. It also uses wood for the handles, so the grips on this thing will never get hot even on the sunniest days, although you may still want to wear gloves, lest risk getting splinters. 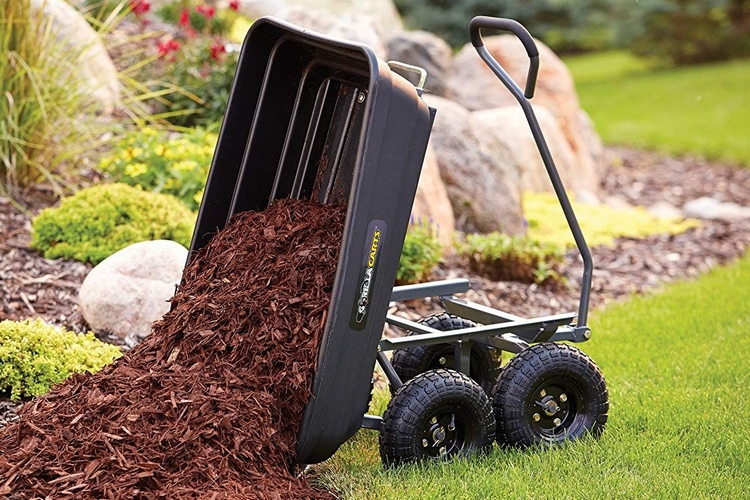 Yes, it looks like a pull wagon kids use to haul their toys around the neighborhood. This dump cart, though, is every bit the utility workhorse you’ll find incredibly useful around the yard. With four 10-inch pneumatic tires, a spacious tub, and a sturdy steel frame, it’s able to carry payloads up to 600 pounds in a perfectly-balanced manner, allowing you to drag it easily even in bumpy, uneven terrain, while a patented quick-release dumping action allows you to unload the cargo with a single lifting motion. 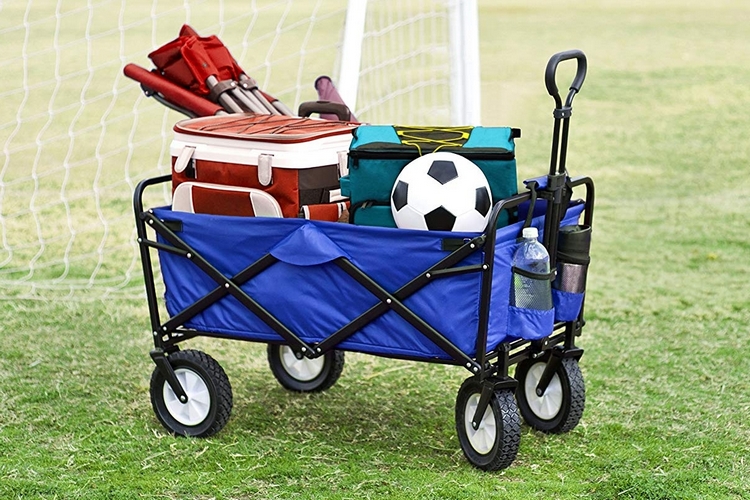 With a maximum payload of 150 pounds, this pull wagon isn’t exactly the kind you’ll want for heavy duty yardwork. If you’re simply maintaining a small yard or garden in the suburbs, though, this is probably the most cost-effective solution, as it’s both affordably-priced and collapsible, allowing it to fold into a compact bundle that you can keep in a cabinet or under a shed whenever it’s not in use. It has a tub made of 600D polyester fabric, so it should hold up to most brushes with rough and sharp objects, all while being fully-resistant to UV light and mildew, so it won’t require as much maintenance as fabric tub normally would. 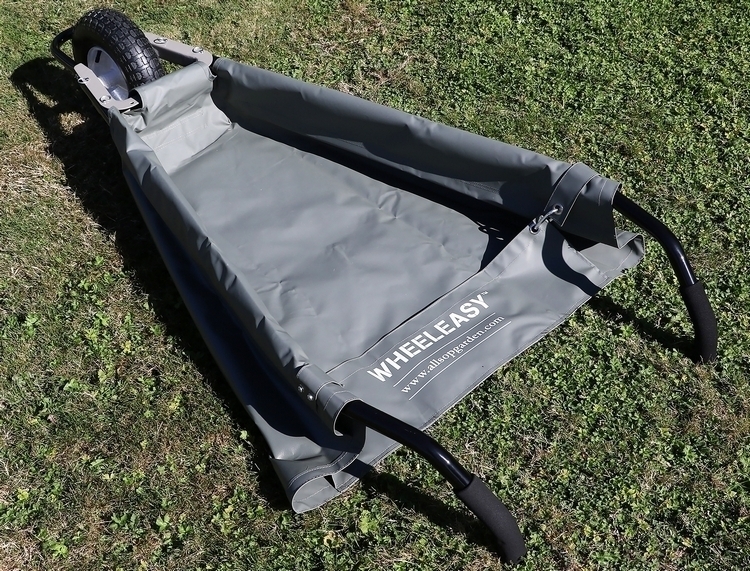 It doesn’t look like much, with its vinyl-coated nylon tub, single-wheel form factor, and collapsible design that allows it to fold flat for easier storage. If you appreciate the convenience of being able to load and unload cargo at ground level (as in, you can just sweep leaves and debris, as well as roll rocks into it), though, then this collapsible wheelbarrow is definitely something to look into. It also weighs less than 15 pounds while supporting payloads of up to 350 pounds (which is seriously impressive for a fabric tub), making this suitable even for more demanding chores. Oh yeah, if 350 pounds is way too much for your needs, they also sell a smaller version (it’s called WheelEasy LE) with the exact same design that can handle up to 150 pounds. 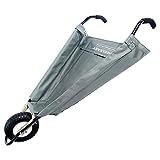 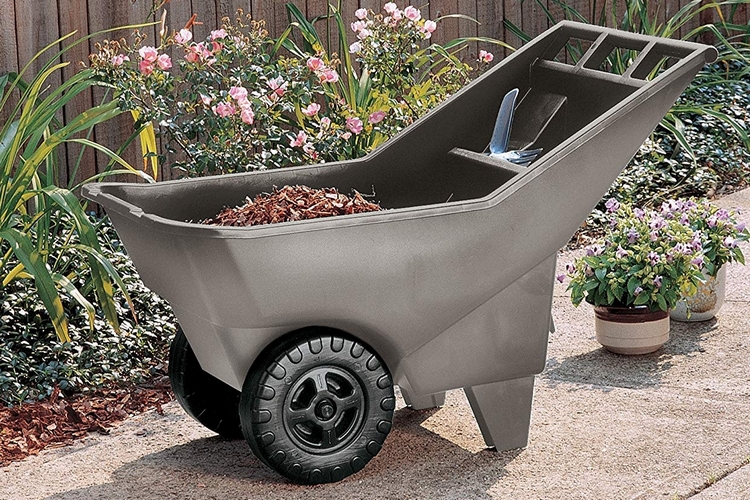 Rubbermaid’s medium-duty wheelbarrow can carry payloads of up to 200 pounds, tilt forward near-vertically for easy loading (and unloading), and roll impressively over rougher terrains, making them excellent for homeowners that regularly perform yardwork on their property. Since many people like to carry tools and drinks with them during yardwork, it comes with a built-in cup holder and four slots for tools, so you can put them on the cart without having to dump them in the tub, along with the rest of the payload. By the way, it’s equipped with a single-piece HDPE construction, so this wheelbarrow doesn’t come apart, making it pretty demanding in terms of storage space, although that also means there are no parts likely to come off as they would with other yard carts. 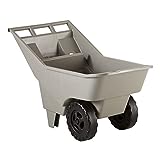 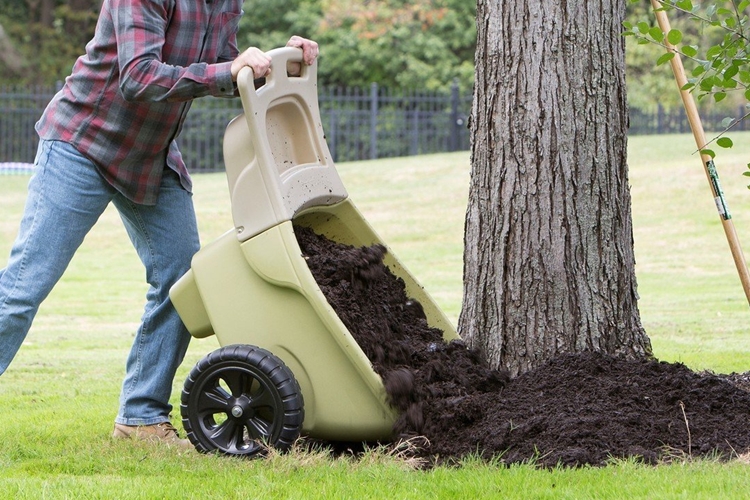 It looks like the kind of wheelbarrow you’ll get when trying to convince the kids to do yardwork on the weekends. Seriously, it looks like a toy. Make no mistake, though, this one’s a seriously handy tool for the yard, with one of the deepest tubs we’ve seen, allowing you to pile in a heap of up to four cubic feet. No word on maximum capacity, but we imagine it should handle light- to medium-duty chores with no issues, while an easy-tilt design makes loading and unloading both easy and very stable. There’s also a storage tray by the handles for holding small tools, snacks, and other small objects. 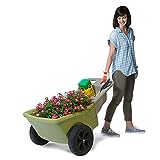 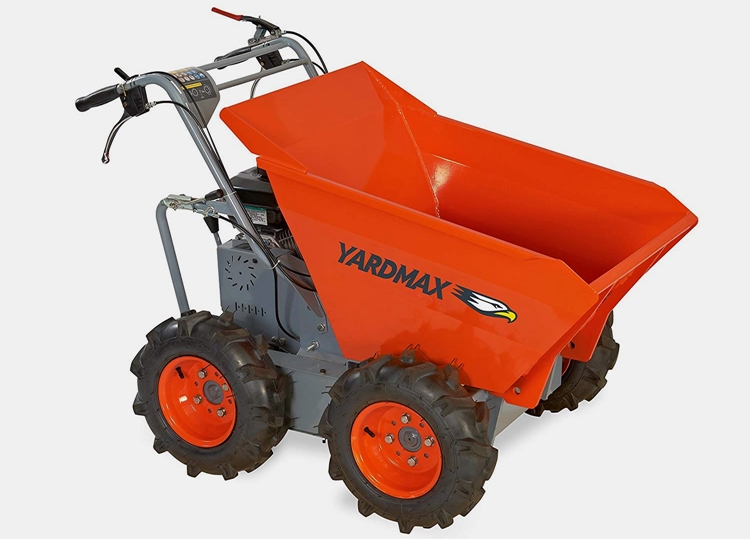 If you have a big property and perform maintenance on a substantial patch of land, a regular utility cart may not be enough to let you do all the work you need to get done. That’s when a powered wheelbarrow like the Yardmax YD4103 starts making sense. With its 660-pound payload capacity, full-time all-wheel drive, and multi-speed transmission (three forward speeds plus reverse), this thing will let you cover large ground while barely breaking a sweat. It even has a one-handed release to let you dump the cargo in one swift move. 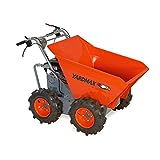