Yes, people have been making pizzas in their home ovens for a long time now. In the last few years, though, we’ve seen plenty of innovation in the space, with wood-fired ovens, wood-fired substitutes, and all sorts of countertop pizza makers vying for a place in people’s kitchens (and backyards). We know, it’s still more convenient to pick up the phone and order a large pepperoni from the nearby pizzeria, but if you actually enjoy making your own pizza at home, we imagine you’ll want to pick up one of the products we list down below.

Some people want to make fancy wood-fired pizza at home. Others just want to be able to cook frozen pizzas and dough-and-topping recipes they put together themselves in the most convenient way possible, with no regard for whether it passes for Neapolitan-style or not. You know, something simple and uncomplicated. These products should make a suitable choice for that crowd. 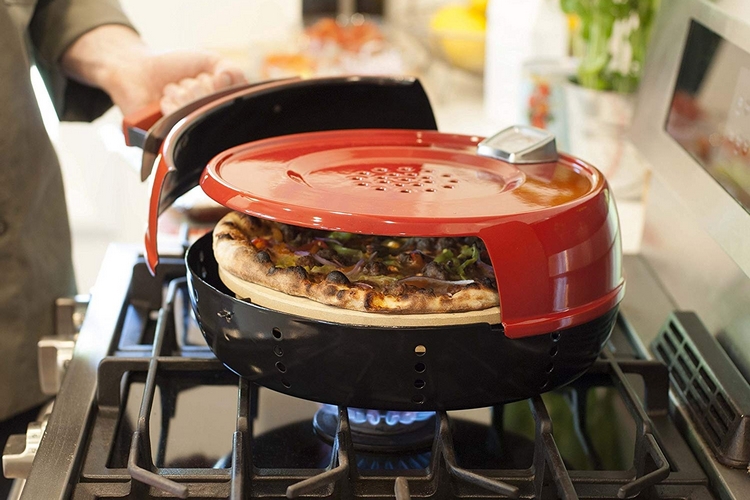 Unlike the full-fledged pizza ovens on our list, this one doesn’t get temperatures anywhere near 800 or 900 degrees Fahrenheit. That’s because it’s more of a pan than an oven that you put on top of a gas stove to heat up. According to the outfit, it can preheat to 600 degrees Fahrenheit in around 15 minutes (just turn up the stove to maximum heat), at which point, it can cook an actual pizza in around six minutes. We know, that’s not nearly as convenient as the one- or two-minute cooking times other options offer, but for many homeowners, this will probably be a better solution, considering it only takes up similar room to many cookware while still cranking out delicious pizzas in small batches. If you’re just making pizzas for one to three people, in fact, this may actually make for the ideal option. 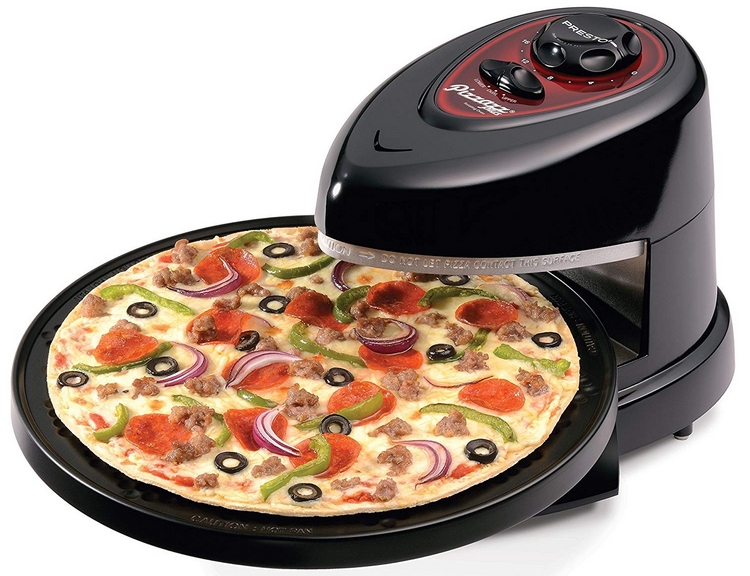 It’s one of those appliances that look absolutely counterintuitive. We mean, pizza ovens usually comes with insulated enclosures to build up enough heat to cook the darn things. This thing, on the other hand, is a wide open tray, with nothing but a slice-sized heating element on one side pushing heat down to the tray. Yet, it actually works. It does that by having a heated tray that cooks the pizza from the bottom while also rotating to alternately expose different sections of the pie to the heating element on top. Both heating elements can be controlled independently, so you can keep heating either the top or bottom without cooking the other side, allowing you to cook your pizzas the way you really like. It also makes for a great way to reheat pizzas and other food items, since you can control the heat precisely, while the tray simply continues to rotate, making sure everything cooks evenly. 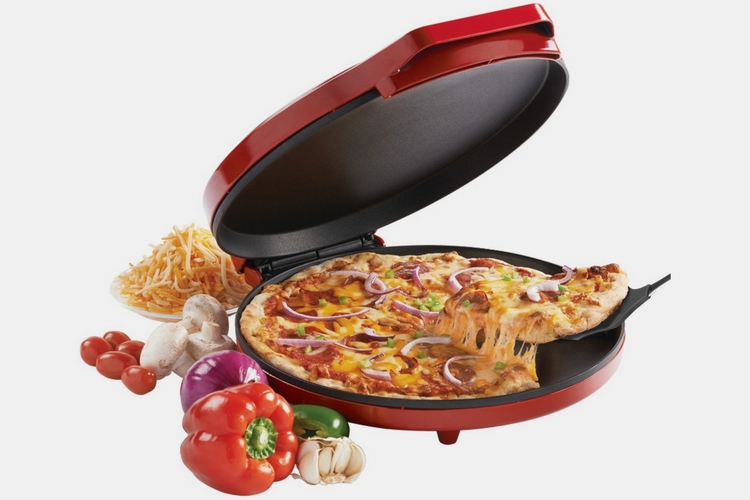 A countertop pizza maker, this appliance has a 12-inch cooking chamber that has heating elements on both the top and bottom panels, allowing it to heat up both sides of your pie as soon as you close down the lid. It has a floating hinge that takes up no footprint on the inner chamber, allowing you to cook even thicker pizzas without any problems. The cooking plates are made from a high-fired ceramic material that’s completely non-stick, so you won’t have any problems cleaning it up after cooking. Do note, there’s no indication as to how long it can cook specific types of pizzas, so you’ll have to experiment as you go to figure out the proper cooking duration. The best part? This thing is so slim, you can tuck it in a drawer when not in use (considering it takes up a 12-inch footprint on the countertop, you’ll definitely want to put it away). 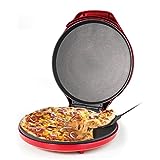 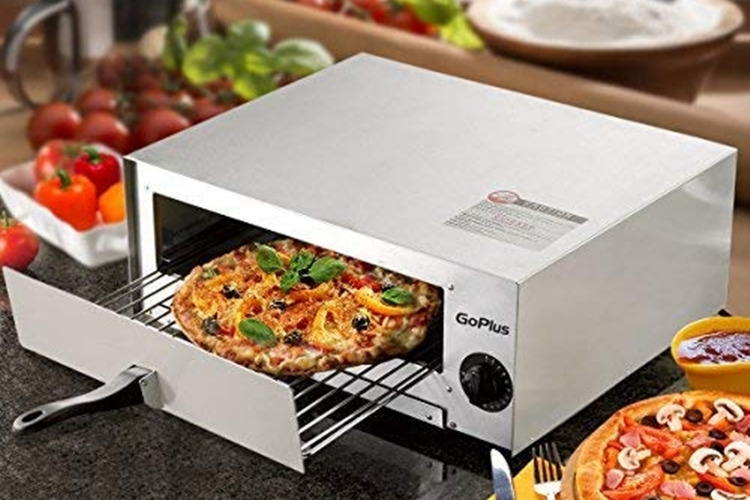 Don’t like all that preheating work that comes with pizza ovens? Well, this electric oven allows you to skip all that. Just place your pizza on the rack, turn the knob to set the cooking time, and get it cooking. There’s no temperature setting, but reviews indicate it goes up to around 450 degrees Fahrenheit, which is enough to bake a frozen pizza in 15 minutes and a fresh one in a fraction of that. Yes, you’ll probably have to experiment a bit to figure out the ideal cooking times, but this boxy countertop oven happens to be one of those appliances that seems to make the process really simple and straightforward (so simple, in fact, you don’t even need to use a pizza stone). 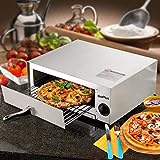 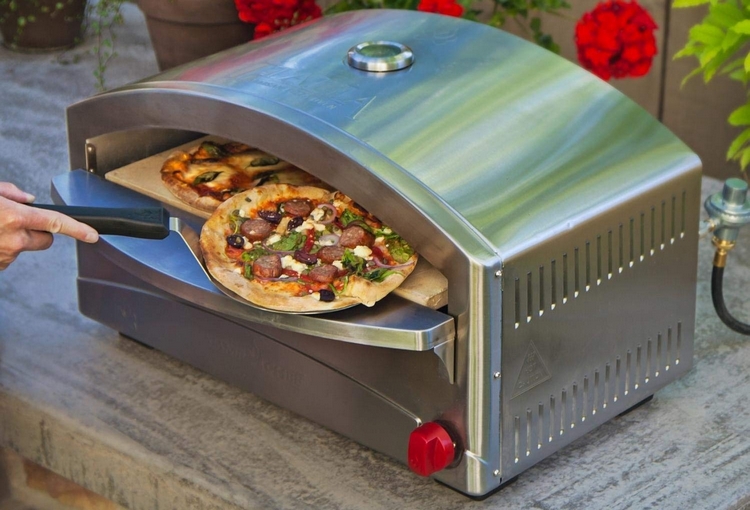 This outdoor tabletop gas oven boasts double-walled construction that enhances heating dynamics, while specially-designed burners emanate enough heat to raise temperatures to 700 degrees Fahrenheit in around 15 minutes. Once preheated, it can crank out crispy pizzas in four to five minutes, with micro-adjustment valves that let you adjust the heat on the fly, in case you want to experiment with various heat settings. Oh yeah, this oven has a slightly different profile than most mini-ovens we’ve seen, as such, it uses a stone that measures 20 x 13.25 inches (width x depth). That means, you can only use it to make one 12-inch pizza at a time, although you can also get away with two 8-inchers, if you want to maximize that wide profile. 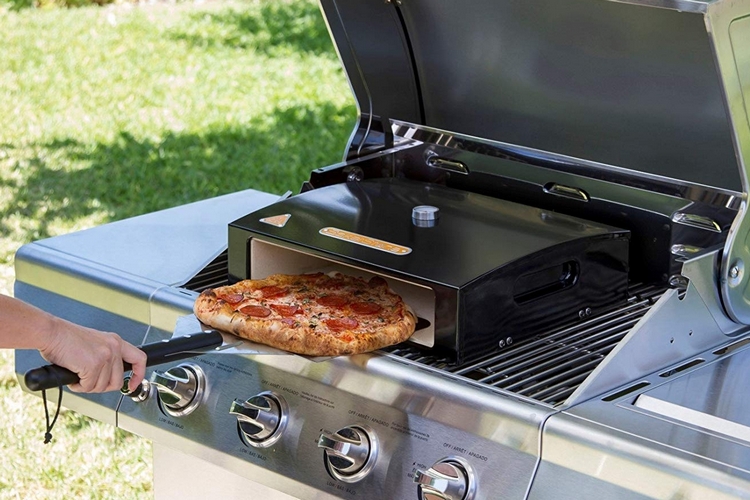 If you already have a large grill sitting in the backyard, then you might want to forego the standalone pizza oven and opt for this “oven box” instead. Designed to sit on top of the grill grates, the Baker Stone harnesses heat from the grill using a unique airflow system that circulates the heat efficiently inside, allowing it to reach the required temperatures to properly bake delicious pizzas. It can work with any type of grill, since it doesn’t use any fuel directly, provided the grill is big enough to accommodate the sizeable contraption (it requires three-burner gas grills or bigger). Preheating takes 30 minutes, after which, it can crank out pizzas in just two, making it handy for cranking out multiple pizzas in a very short period. 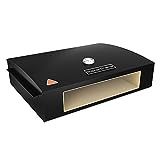 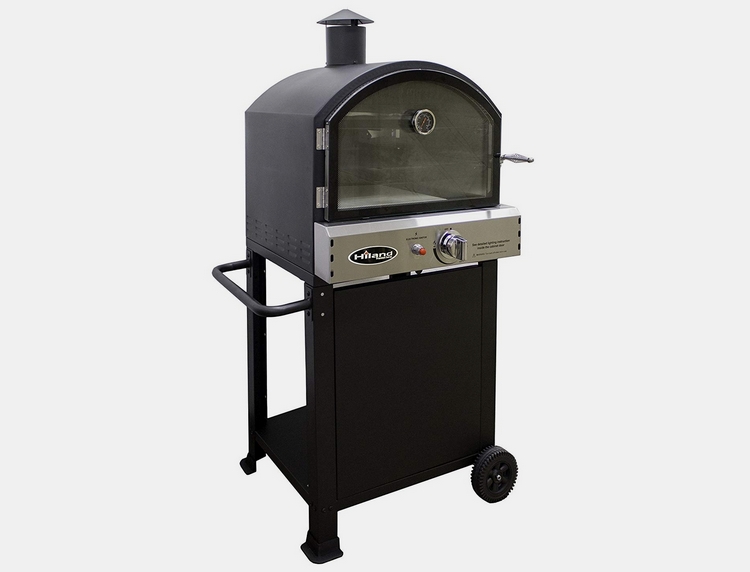 This outdoor pizza oven is mounted on a wheeled rack, allowing you to easily push it around the backyard, in order to find an ideal position for cooking (ideally, one with where it won’t be exposed to wind, which can affect the heating process). Preheating for 20 minutes gets it to around 500 degrees Fahrenheit, allowing you to cook a 12-inch pizza in around five minutes. Yes, it can get hotter, but you’ll have to preheat for over an hour(some say they’ve gotten over 700 degrees after two hours), which might be viable, in situations where you intend to cook multiple pizzas for a party, as getting it that hot should let you crank out pizzas in just two minutes or less.

What sets apart the ovens that can make Neapolitan-style pizzas from ones that can’t? Temperature. If you want to replicate wood-fired pizza goodness, you need a cooking area that can heat upwards of 800 degrees Fahrenheit. These products can do just that. 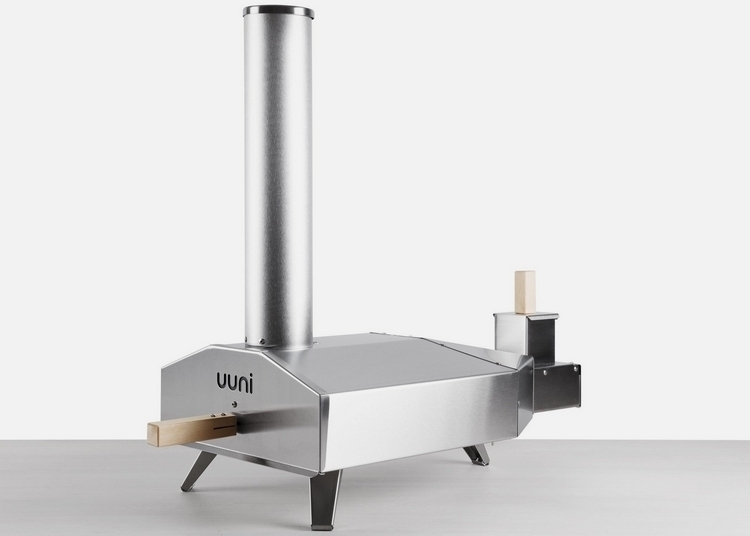 When the original Uuni made its debut as a Kickstarter project in 2013, many were skeptical. Wood-fired ovens were big, expensive, and used almost exclusively by restaurants, so promising one that’s both compact enough to fit in the average backyard and affordable enough for the average consumer seemed like another crowdfunding project that was biting off more than it can chew. Fortunately, they proved the skeptics wrong and the Uuni 3 is the latest iteration of that original oven. Equipped with a burner designed to use energy-dense wood pellets for fuel, the oven can heat up to 932 degrees Fahrenheit in just 10 minutes, after which you can start cooking 13-inch or smaller pizzas in just 60 seconds each. 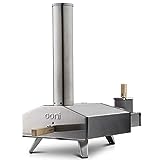 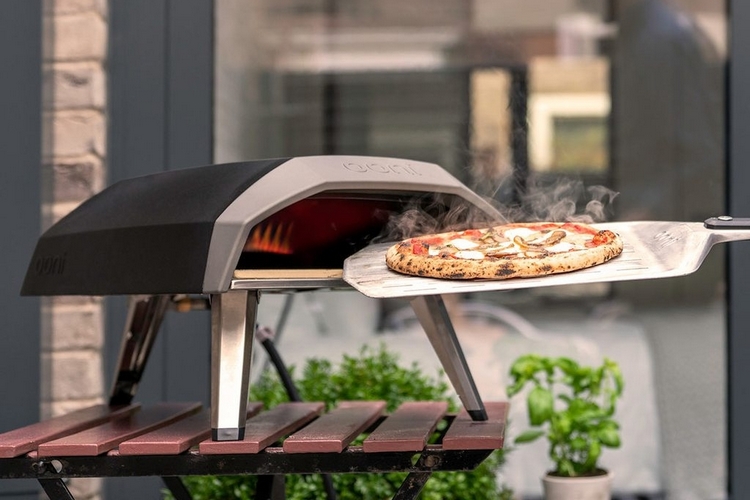 Made by the same outfit behind the Uuni 3, the Ooni Koda ditches the use of wood pellets for fuel in favor of plain old gas. That way, you don’t have to pick up a bag of pellets or order another batch online – just hook it up to a gas line, activate the instant ignition, and preheat the oven for 15 minutes to let it reach 932 degrees Fahrenheit. From there, just throw in a pie and take it out after 60 seconds to get your perfectly-cooked Neapolitan-style pizza right from the comfort of your home.

Designed to sit on top of a stove similar to the Pizzacraft Pizzeria Pronto, this cookware lets you bake pizzas right on top of any heat source by trapping it efficiently, allowing it to preheat up to 800 degrees Fahrenheit in just 10 minutes or less. Made from high carbon steel, it can work on any kind of heat source, too, from gas ranges and induction stoves to grills and open campfires. The actual preheating time, of course, will depend on which heat source you’re using (it will heat up faster on an induction stove, for instance, than other options). Once heated to desired temperatures, it can cook thin-crust pizzas in just three minutes, so just adjust the cooking time, depending on the thickness of the dough you’re using. 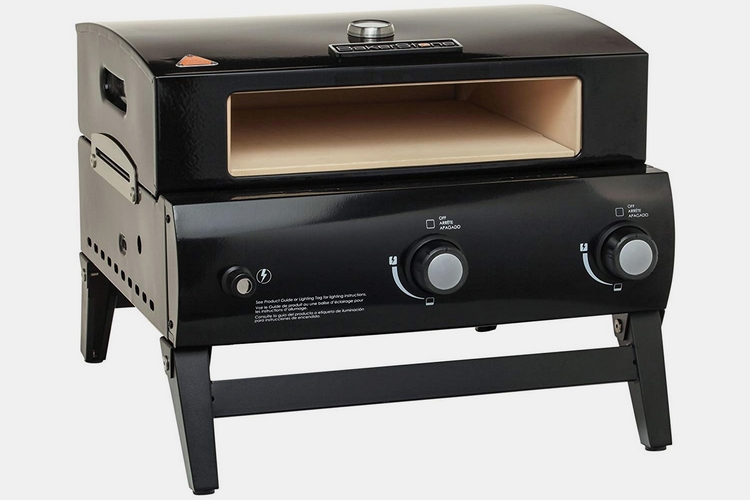 This outdoor gas oven, which conveniently fits in most any tabletop, can heat up to 900 degrees Fahrenheit, allowing you to cook a 13-inch pizza in just two minutes or less. It’s gas-powered, too, so you can just hook it up to an LPG tank to do your cooking, with a portable design (removable oven box, foldable legs) that makes it easy to transport. Even better, it’s a versatile appliance, as the outfit sells both a griddle and a grill that can go on top of the heating element, essentially turning it into an entirely new cooking tool when needed. 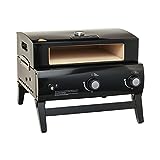 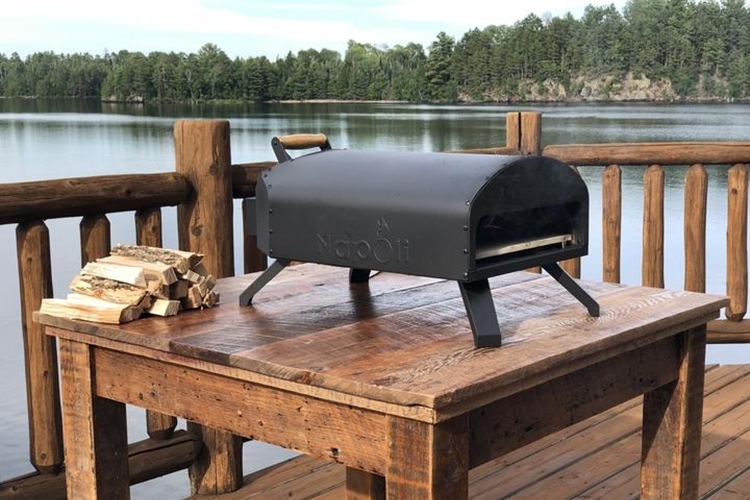 Designed for convenience, the Napoli has a fuel tray that can work with wood, charcoal, and wood pellets, allowing you to use whichever fuel is readily available to cook pizzas at temperatures of 925 degrees Fahrenheit. Even better, it can be fitted with a gas burner attachment that heats it up to 900 degrees in under 10 minutes, making it arguably the most versatile of the compact pizza ovens currently in the market, as you can use whatever fuel is within easy reach at absolutely any time. It’s priced at $299.99.