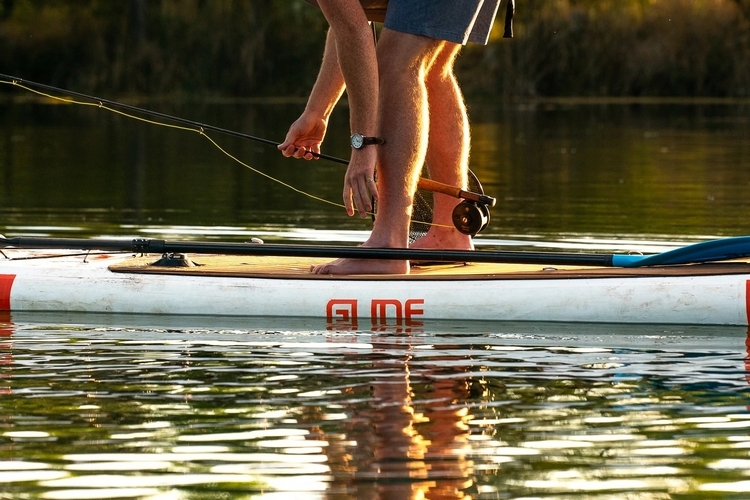 Whether you’re fishing on rivers, lakes, or oceans, the shoreline is often a good enough place to pull out your angling gear and catch a sizeable load of fish. However, exploring long shorelines by foot while you try to find a good place to fish can be extremely time-consuming (not to mention, utterly tiring), which is why many people prefer to bring a suitable watercraft that can make it easier to get around the water.

While kayaks and small boats have long been the water vessel of choice for many anglers, stand-up paddleboards (SUPs) have become popular in recent years. They’re fun to ride, easy to handle, and, if you get the right model, stable enough to keep you balanced while you wrestle with a spirited catch. With a SUP, you’ve got a capable enough watercraft that you can take into deeper waters, allowing you to fish over reefs and rough ground that’s teeming with marine life, all while allowing you to explore rocky coastlines, breakwaters, and ledges where fish may abound. There’s plenty of space onboard, too, giving you enough room to keep a gear bag, a cooler, and a few other choice items in tow.

These are the best fishing SUPs for your angling adventures. 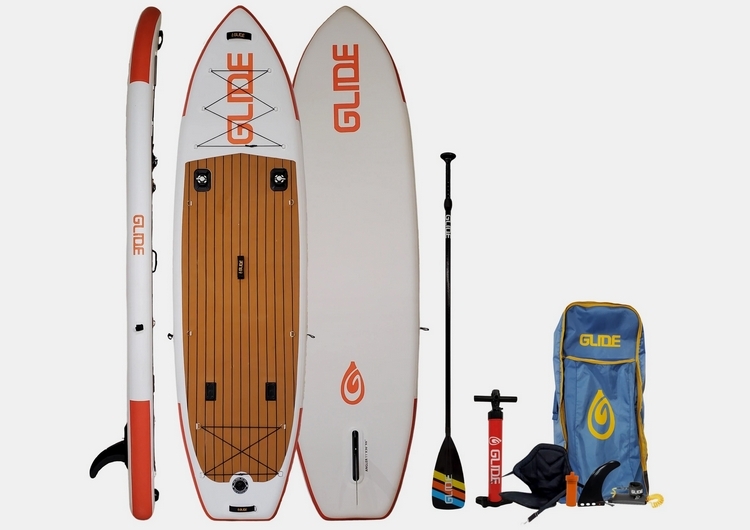 This inflatable fishing SUP measures 11 x 3 feet (length x width), all while supporting loads of up to 500 pounds, ensuring it can accommodate you and all your fishing gear. The combination of the wide body and flat bottom allow for excellent stability, while a brushed deck pad gives you a textured, non-slip surface to stand on during angling. There is plenty of storage room onboard, including bungees on the front and rear, four deck mounts for attaching accessories (seats and racks), two stake pole mounts, multiple d-rings and grips, and a USA-style fin box for using any standard longboard fin (no side fins, though). What we love most about this board, though, is the durable construction, with military-grade 1300-denier PVC shell, ultra-reinforced drop stitching, a premium core that can handle up to 25 PSI, and high-pressure, heat-pressed rails both front and rear. All that for a relatively affordable price, too. 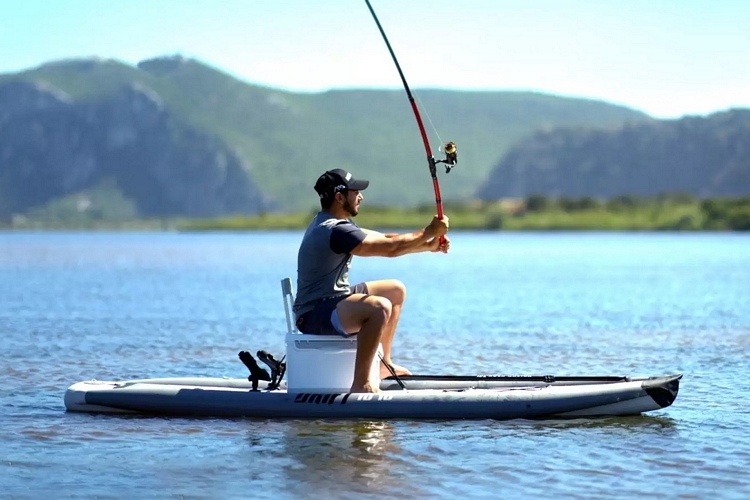 Large rails on either side of this inflatable SUP ensure stable performance, while the size (10.8 x 3.17 feet) puts just enough space on the deck to accommodate you and your gear (the air chambers on the rails do take up a fair amount of the width). It’s neither the biggest nor the most stable paddleboard in this list, but it manages to strike a better balance between stability, maneuverability, and speed compared to the bigger fishing SUPs out there. Suffice to say, you’ll enjoy taking this out for recreational paddling as much as you do for angling. Because of the more compact profile, it won’t support extreme loads, maxing out at just 286 pounds, which should still be enough for one person and all the gear you need for fishing. On the upside, that compact size makes it pretty light at just 24.5 pounds, allowing you to have an easier time transporting it to the water. It comes with an optional cooler that has an integrated backrest (you can secure it through the central D-rings), allowing you to use it as a seat, so you can plop down comfortably while waiting for your bait to catch something. 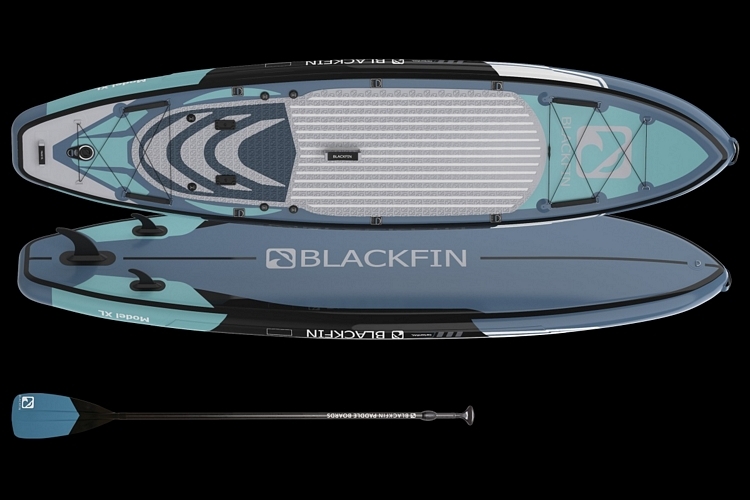 At 11.5 x 3.17 feet (length x width), this fishing SUP gives you plenty of room to move around on the deck, allowing you to paddle and fish comfortably, all while carrying a good load of cargo onboard. It’s also impressively agile for its size. Don’t get us wrong – this is still slower than a standard recreational paddle board, but it is quite a fast performer for the category. It has a three-fin setup, allowing you to configure it according to your liking, with 20 D-rings and eight gear mounts allowing you to customize it extensively for your individual angling requirements. It can accommodate plenty of configurations, too, from outfitting it with fishing racks and sand spears to adding dual seats and more. The whole thing is also impressively light for its size, tipping the scales at just 29 pounds. Granted, all those accessories will make it weigh more, but that should be well worth the trouble. 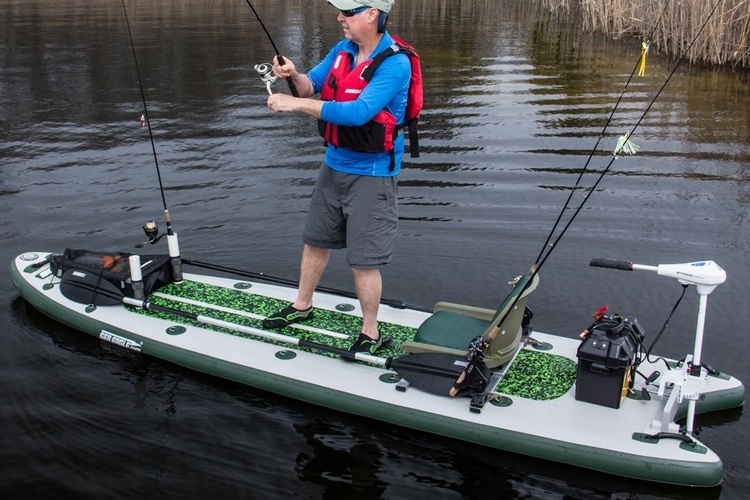 Sea Eagle calls their FishSUP series as paddle boards “designed for fishermen always on the go.” That means, a SUP built from the ground-up as a powerful fishing vessel, rather than a recreational paddling equipment.

As such, this is one inflatable SUP optimized for angling activities. Measuring 12.5 x 3.3 feet (length x width) with a large swallow tail, it offers plenty of room on deck (in fact, it’s the biggest on the list), all while being incredibly stable even when you spend your time moving around onboard, making it extremely difficult to fall, flip, or roll even as you reel in larger, feistier fish. You can ride it standing or sitting via optional 360-degree swivel seats, as well as outfit it with a motor (up to 55 pounds) via a detachable rear transom. It’s also built tough, with 100D reinforced drop stitch construction making it stiff enough to support loads of up to 500 pounds.

We especially love all the little details that make it perfect for fishing. There’s a pocket for stashing your paddle, for instance, so you can busy yourself angling without accidentally having the paddle fall off, as well as non-slip EVA foam deck pads to let you plant your feet firmly. There’s also a built-in fish ruler for measuring your catch as soon as you get them, along with multiple D-ring attachment points throughout the outer section, giving you plenty of spots to secure your gear.

At 44 pounds, it’s on the heavier side, but not by much compared to other fishing SUPs, which tend to be bigger and heavier than most recreational paddleboards. It’s available with a variety of accessories, including seats (up to two), solar panels, and a motor.