No, you probably don’t need more than a couple pocket knives and multi-tools in your EDC stash. If you’re like us, though, you can appreciate the finer qualities of a well-made folder and a well-equipped multi-tool, making them desirable to pick up, regardless whether you actually need them or not. As with every other year, a generous selection of EDC knives and multi-tools are scheduled to roll out in the coming months. These are the ones we have our eyes on, in order from the most expensive to the most affordable. 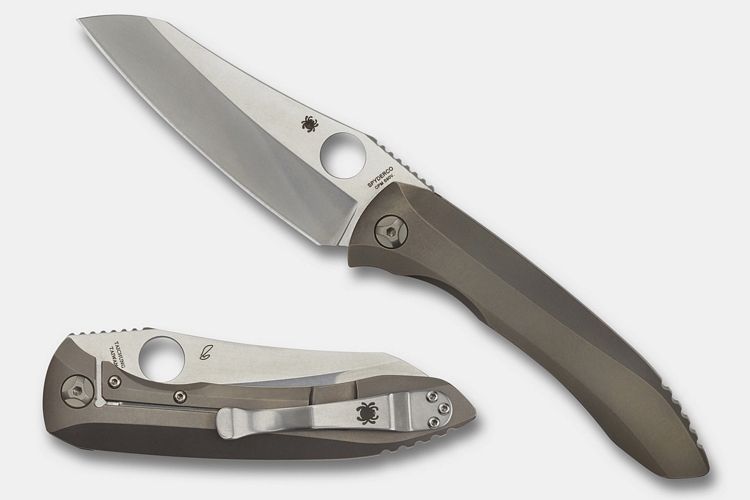 The most expensive knife the outfit ever made, this full integral folder has a CPM-S90V stainless steel saber-ground blade that combines a robust tip for effective stabbing with a long belly, giving it plenty of edge for efficient slicing. A Reeve Integral Lock mechanism keeps it attached to the fully-machined titanium handle, while ball-bearing washers allow the blade to pivot smoothly, whether it’s being deployed or collapsed. The handle features a slim contoured frame, a hardened steel insert on the face for over-travel prevention, a topside relief for easy lock bar access, and a right-side hourglass pocket clip for tip-up mounting. 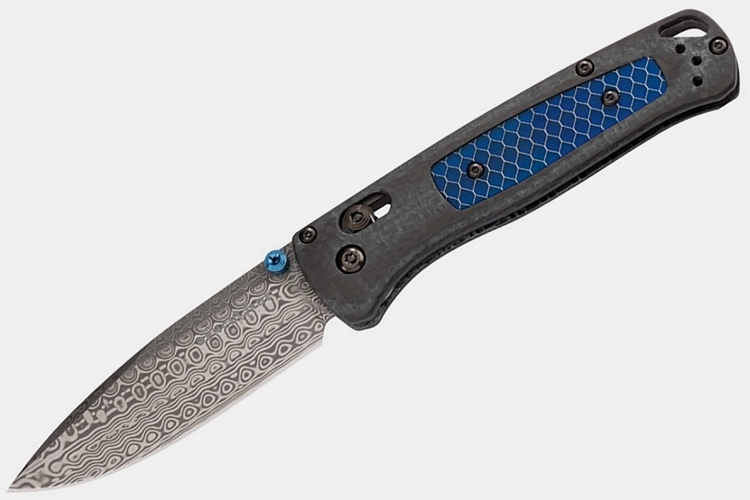 A Gold Class version of 2017’s breakout hit, this Bugout retains the original’s 3.25-inch drop point blade and handle design, but decks it out in Damascus steel and carbon fiber. That’s right, it has a Damascus steel blade adorned with a Munin pattern and a carbon fiber handle, along with smoked gray PVD coated liners, pocket clip, and hardware to give the utilitarian favorite a whole load of flash. 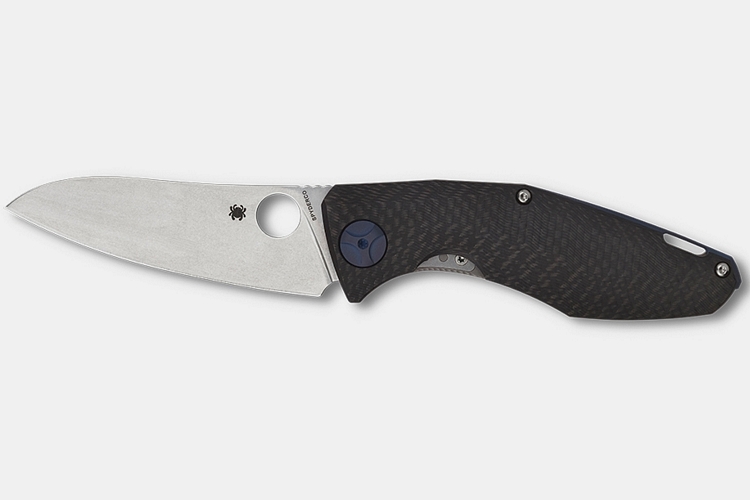 Designed by renowned custom knife-maker Dmitri Sinkevich, this premium folder, which is manufactured in Spyderco’s highly-regarded Taiwan workshop, the Drunken S90V is equipped with a full-flat blade that’s ground from CPM-S90V stainless steel. Clad in a modified sheepsfoot shape, the blade has a rugged stonewash finish and a large 12mm round hole for smooth one-handed deployment. This blade is paired with a milled and contoured handle cut in carbon fiber and titanium (the former out front and the latter in the back), with both scales covered in a wavy texture pattern that the outfit calls “drunken” (hence, the folder’s name). It has an integral frame lock, with a steel lock face insert for highly-reliable, long-term performance. 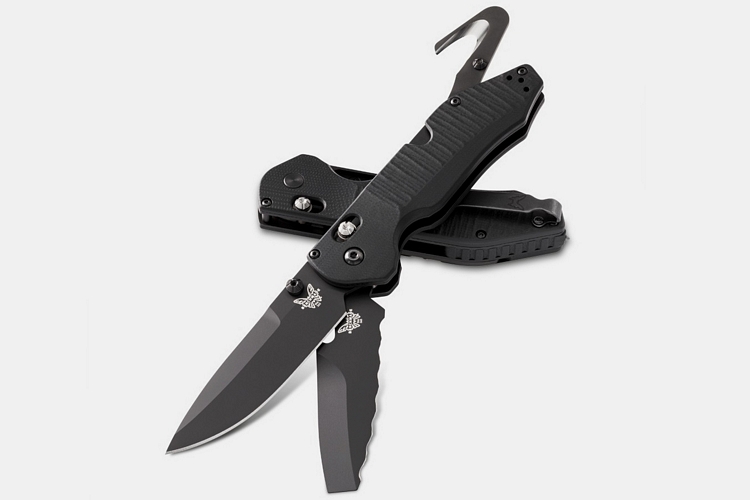 The latest addition to the outfit’s impressive rescue tool lineup, the tactical folder has two S30V steel blades attached to the handle using the outfit’s Axis lock, namely a traditional drop-point and a rescue blade with an opposing bevel edge. Aside from the blades, the folder gets a seatbelt cutter in the rear, a carbide tip glass breaker, and integrated rescue hook, making it a specialty knife for those who want to be prepared for emergency situations worthy of an action movie. 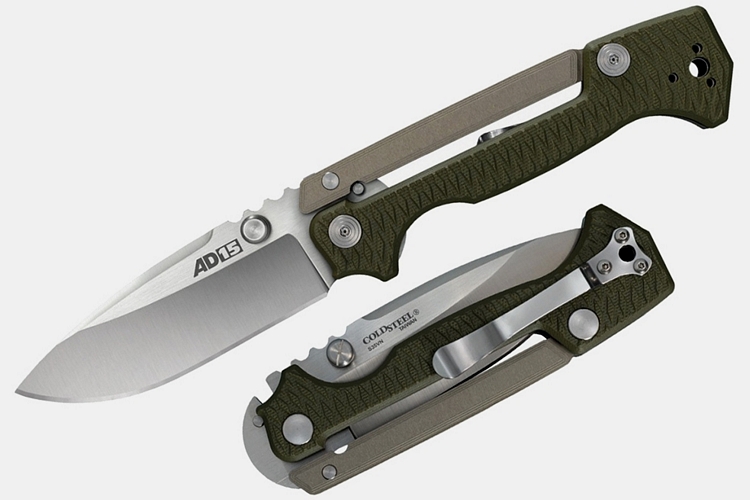 One of Andrew Demko’s weirder and more complex designs, the AD-15 is a tactical folder equipped with the knife maker’s famous Scorpion Lock, enabling one-handed ambidextrous operation. To the unfamiliar, the Scorpion Lock uses a locking component called the yoke, which forms the back part of the knife’s handle, requiring you to pull back on the yoke with your middle finger and thumb, then push the blade spine with your index finger to disengage the blade. It pairs a broad 4-inch drop-point blade made from S35VN steel to a four-part handle (two parts on each side), with each side pushed down towards the other using a spring. Like we said, this is quite complicated and could make for interesting conversation with fellow knife collectors. 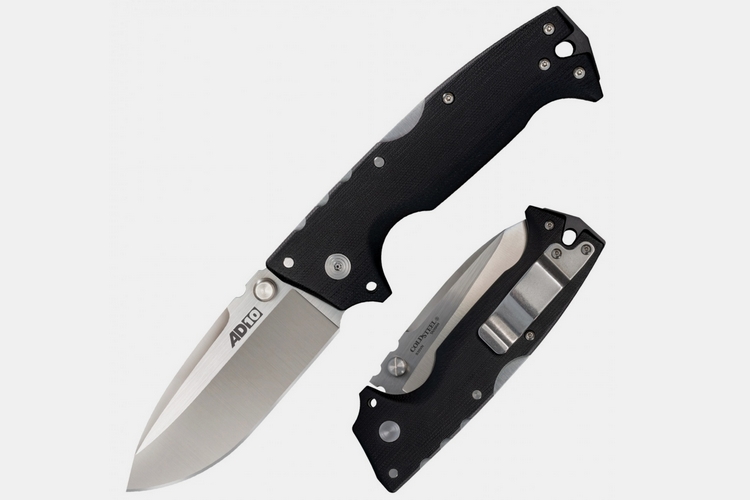 Another full-production collaboration with Andrew Demko, this folder carries the custom knife maker’s signature all throughout. The Tri-Ad lock he helped develop for Cold Steel? It’s in here. The extra-beefy drop point that makes you want to spike it through a thick slab of steak? That’s right. The 3.5-inch blade is ground thin at the edge for serious cutting, shearing, and slicing power, while remaining highly resistant to bending, chipping, or breaking. It pairs that blade with an equally beefy handle, sporting full-length aluminum liners, 3D-machined G-10 scales, and oversized hardware, while an ambidextrous thumb stud and dual pocket clips round out the complete package. 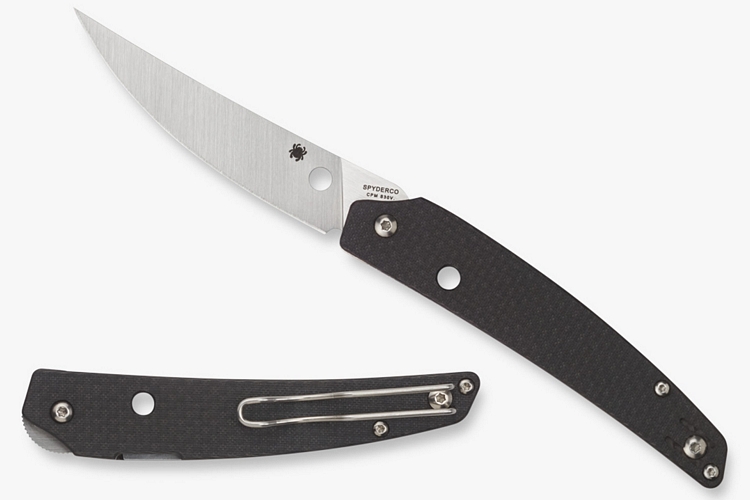 A collaboration with Paul Alexander, the Ikuchi is described as a “thoroughly different approach to pocket knife form and function,” bearing a slim and long profile that’s quite different from the norm for Spyderco. Like most of the outfit’s knives, it has an S30V stainless steel blade spanning 3.1 inches long, so there’s plenty of edge for cutting, with carbon fiber scales, so despite the length, it manages to weight a light 2.1 ounces. Unlike other Spyderco knives, there’s neither a functional thumb hole nor a flipper tab (which is what allows it to be so narrow), instead relying on a front flipper deployment mechanism. It’s priced affordably, too, making it one of the best value blades we’ve ever seen from the outfit. 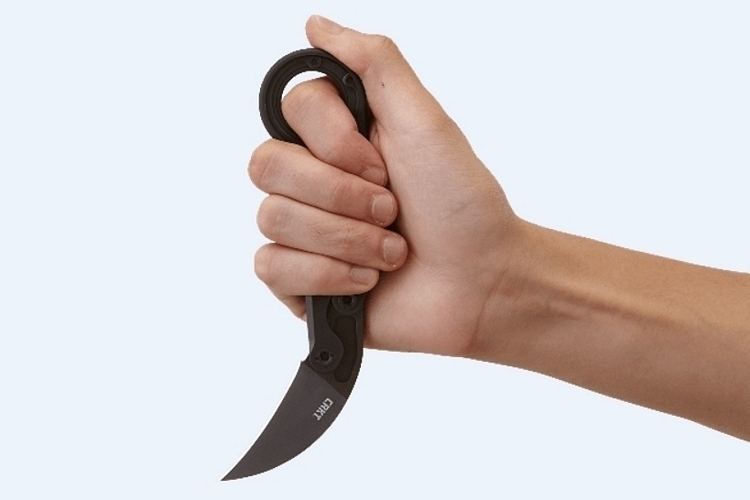 CRKT’s version of Joe Caswell’s custom Morphing Karambit, the Provoke borrows the former’s unique opening system, allowing the blade to be deployed without putting any of your fingers on its way. It has a 2.4-inch hawkbill-style blade that’s mounted on a 4.96-inch handle, giving you plenty of material to grip every time you slice, cut, and stab for a really secure hold. There’s even a finger loop at the end of the handle, allowing you to secure the knife to one of your fingers to guarantee it never slips off. 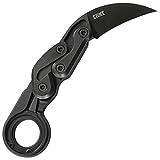 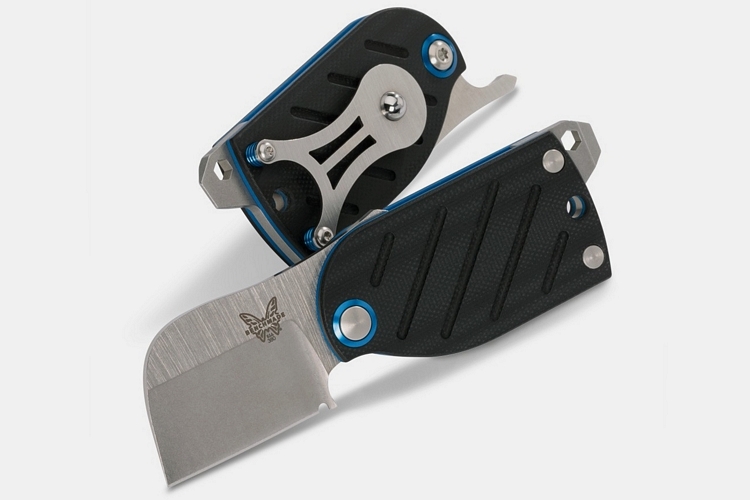 A keychain EDC tool, this friction folder bundles six useful items in a very small package, having been equipped with a wharncliffe blade, a screwdriver/pry tip, a micro bit slot, a custom clip, a bottle opener, and, of course, a key-ring hole. The S30V steel blade is attached to a black G10 handle. 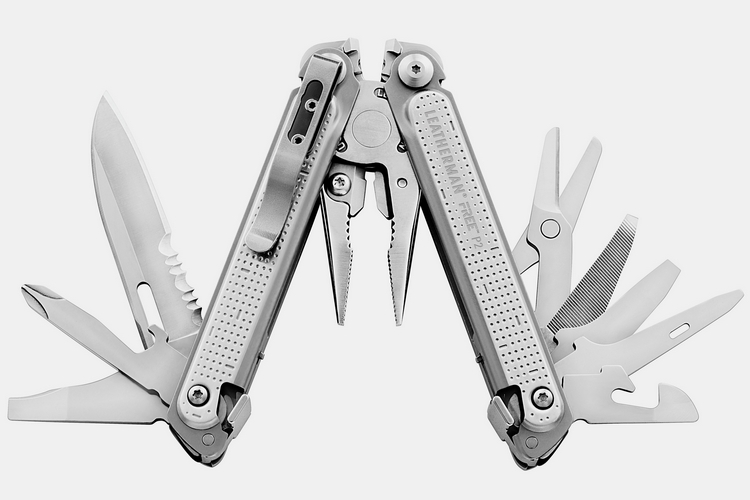 Leatherman’s newest multi-tool line brings some innovations to the EDC space, sporting a magnetic architecture that makes it easier to deploy, handle, and put back all the individual tools. Basically, integrated magnets hold the entire multi-tool closed, allowing you to open it right down the middle by pushing with your thumb and flicking your wrist like a butterfly knife. To access each tool, simply push them away with your thumb to snap off the magnetic hold and push them in with your index finger once you’re done to snap it back in place. Seriously, it’s such a simple yet highly-intuitive design that we’re genuinely surprised took this long to happen. 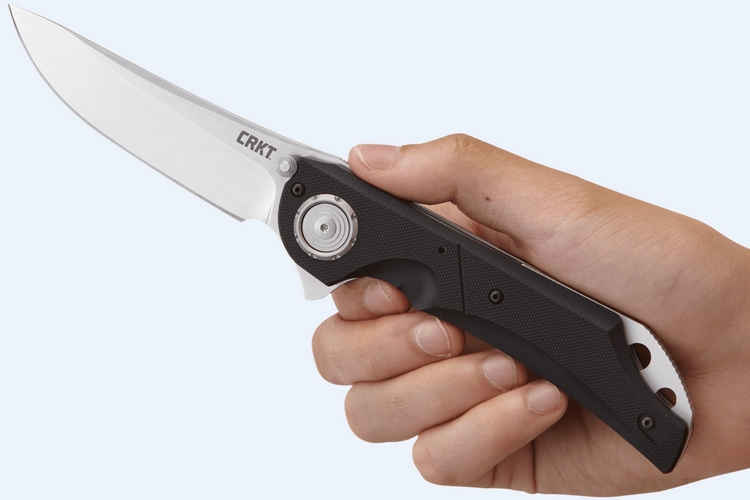 Billed as a “heavy duty EDC knife,” this large folder has an overall profile of 9.4 inches long, making it a questionable knife for stashing in your pocket (unless, of course, you enjoy the noticeable bulge). Equipped with a deadbolt locking system, it has steel bolts interlocking with the base of the blade, ensuring zero chance of accidental deployment or closure, allowing it to be used for the most difficult cutting tasks. Disengaging the steel bolts is easily accomplished by pressing a button on the handle, allowing the blade to open or close without impediment. 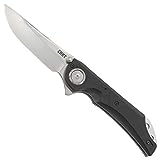 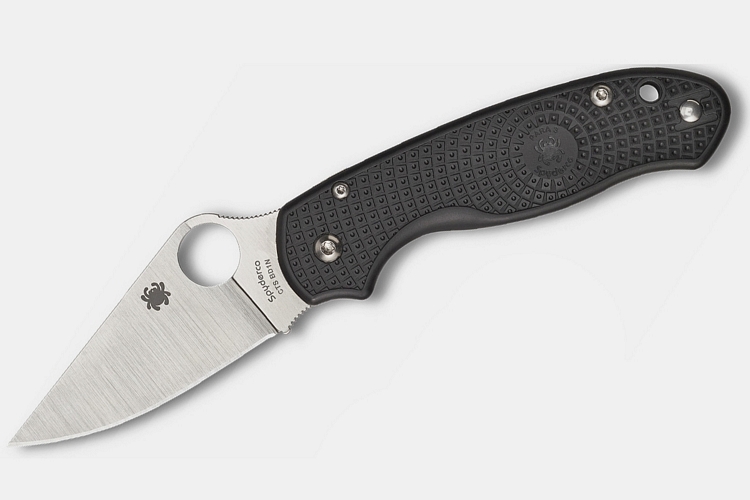 A more affordable version of the smash hit Para 3 from last year, the new folder retains the same 52100 forged carbon steel blade, full-size thumb hole, and open-backed construction that everyone seemed to love. It pairs all that, however, with a new fiberglass-reinforced handle to help round out the lightweight build, while making it very affordable.

RELEASE INFORMATION: Coming soon, with a street price of $91. 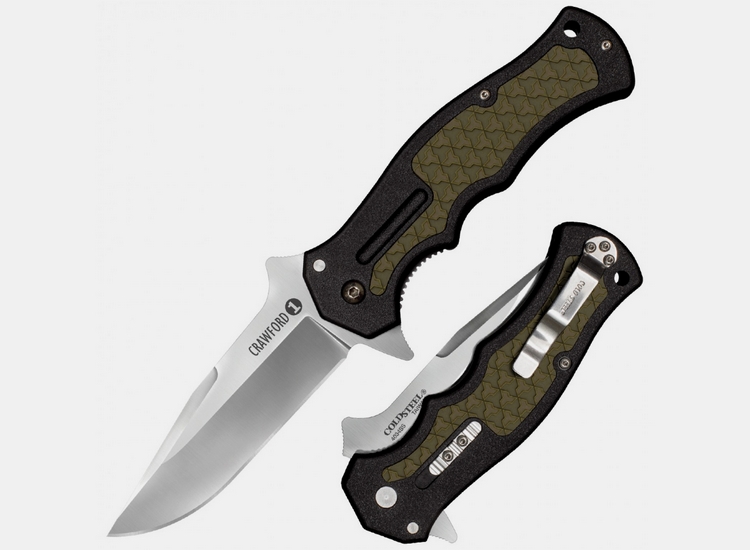 Wes Crawford’s first collaboration with Cold Steel recreates the custom knife maker’s pricey “flippers” in affordable form, allowing this folder to open lightning fast with a single-handed flip. It has a blade cut in Japanese 4034 stainless steel that’s been hollow-ground to a thin, razor edge, with the entire 3.5-inch blade sporting a wide saber grind, a strong sharp point, and extended belly for plenty of cutting and slashing. That blade is combined with a nearly 5-inch fiberglass-reinforced nylon handle with traction rubber inlays and a low-profile pocket clip. 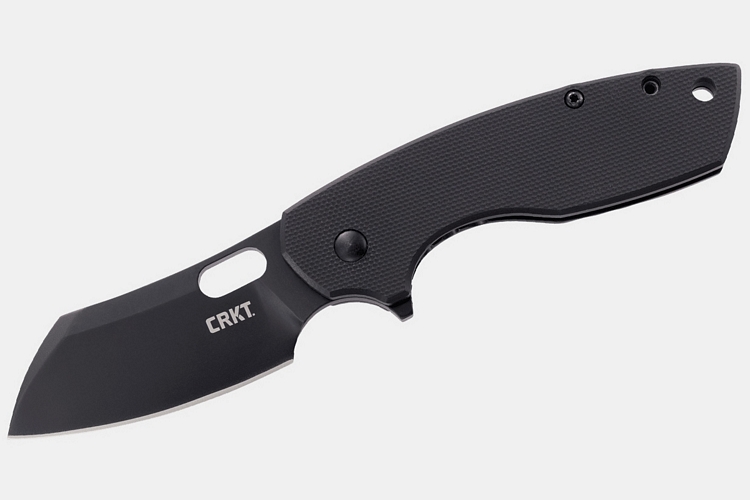 What do you do when you find yourself with a hit knife? Well, you do more of the same thing and that’s exactly where CRKT went with the Pilar Large, which sports a 2.7-inch blade and a 4-inch handle to make it just under an inch longer than its predecessor. That extra size should make it even more useful, allowing it to tackle tasks that wouldn’t have been comfortable with the original’s smaller profile. Construction is 8Cr14MoV steel for the blade and G10 for the handle, making it lighter than the original despite the bigger size. 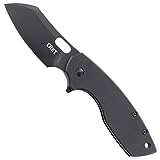