Best New TVs and Monitors to Look Forward To In 2019

TVs and monitors are among the most essential consumer electronics around, as they’re used extensively in homes, offices, and all sorts of business establishments around the world. As such, it’s not surprising to see a bunch of new display panels come out year after year.  If you’re among those who prefer buying the cutting edge in tech, these are the products you’ll definitely want to look for when shopping for TVs and monitors in the coming months. 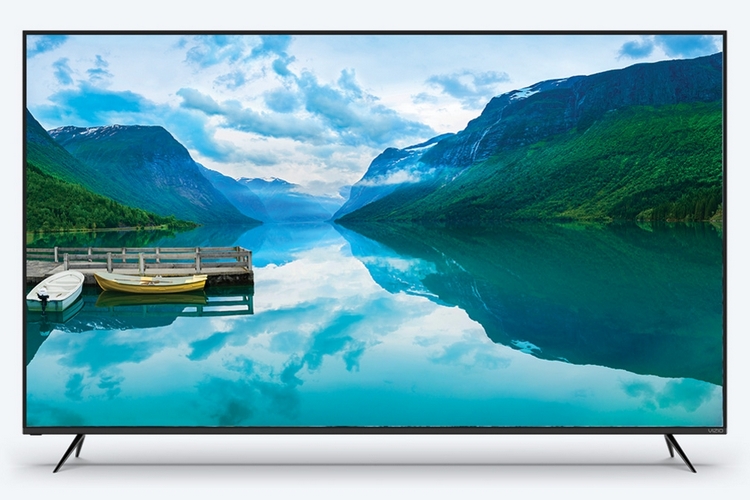 While Vizio is no stranger to high-end TVs, they built their name on affordable panels that performed on par with their more expensive counterparts. And they’re not abandoning that strategy for the year, as their 2019 M-Series continues the line’s tradition of combining mid-range pricing with premium technology. As such, the new M-Series retains the same standout elements from last year, such as a bezel-free design, 4K HDR, Dolby Vision, Ultrabright 600, image stabilization, and 120Hz refresh rate, all while adding the Quantum Color technology that was previously only available in the outfit’s flagship panels. The new line is available in 55-, 65-, and 70-inch sizes. 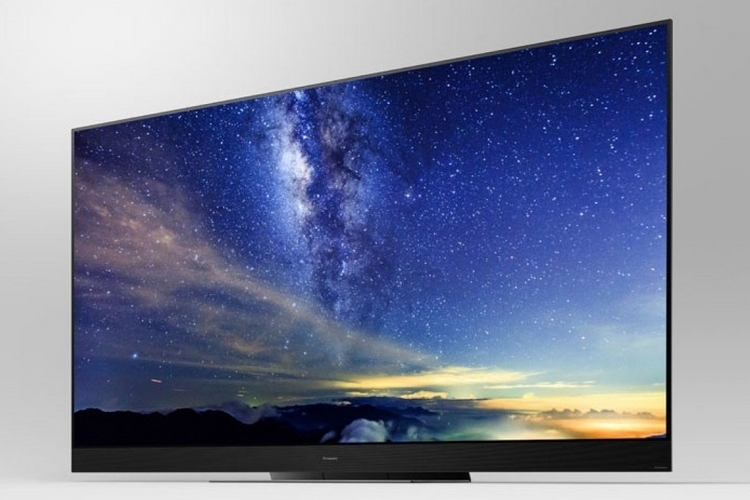 Touted as “the world’s most cinematic TV,” the GZ2000 4K OLED TV supports not just HDR10+ and Dolby Vision HDR, but also HLG Photo, making it an excellent panel for displaying still photographs, in case you like to use your TV as an occasional picture frame. It uses a professional-edition 4K OLED panel that’s received bespoke hardware improvements from Panasonic’s R&D engineers, all while receiving custom color-tuning by renowned Hollywood colorist, Stefan Sonnefeld. They pair that panel with upward-firing speakers that have been custom-tuned by Technics engineers, ensuring it delivers an immersive experience on both the visual and sonic fronts. 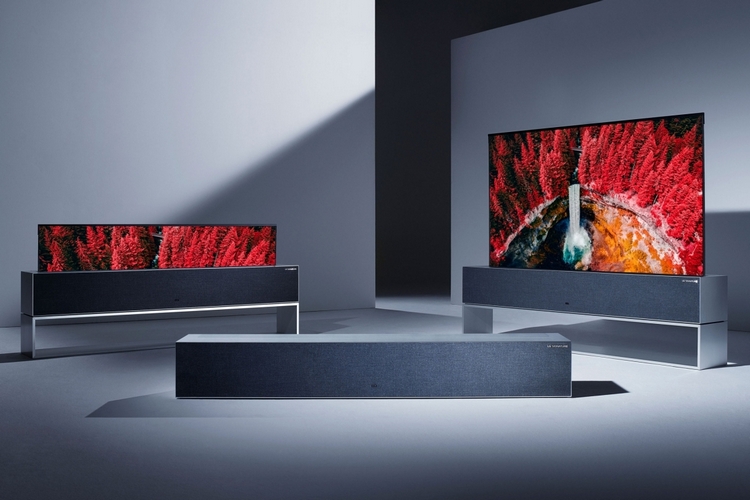 A TV fit for the most lavish New York apartment, it’s the world’s first (maybe only) rollable TV, allowing it to roll up and hide away in the base cabinet when not in use. Seriously, you end up with nothing but a table in its place (well, it looks more like a wide-profile speaker, with its metal body and wool grille), allowing you to put another TV on top, in case you prefer watching on something else for a change. We know, that sounds ridiculous, but you already own the most ridiculous TV there is, so why not? And yes, you can make the TV rise up or roll back down using voice commands via Alexa or Google Assistant, so it’s as convenient as it gets. 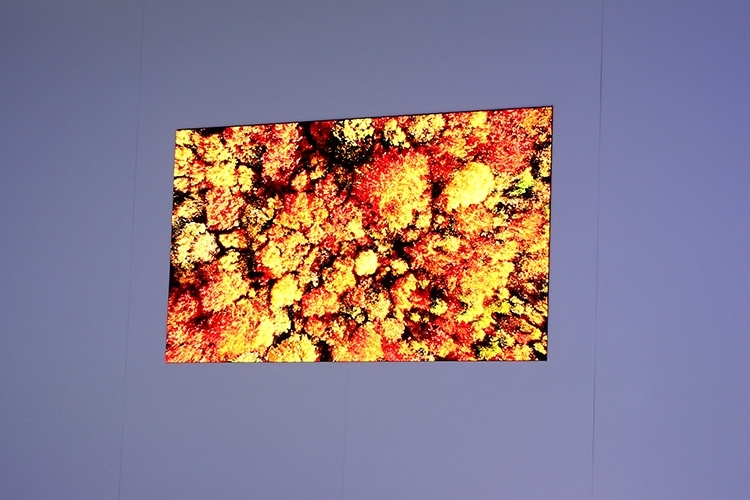 Okay, we don’t actually know whether this one’s coming out this year. If it does, though, then the Samsung MicroLED will definitely count as one of the most exciting product releases in the category. What exactly is it? According to the company, it combines the best parts of OLED and LCD panels, allowing it to deliver perfect blacks, pinpoint contrast control, greater brightness, and more efficient operation. Oh yeah, it’s also modular, allowing you to combine multiple panels to display a single picture (e.g. use four 75-inch TVs to create one gigantic 150-inch panel). 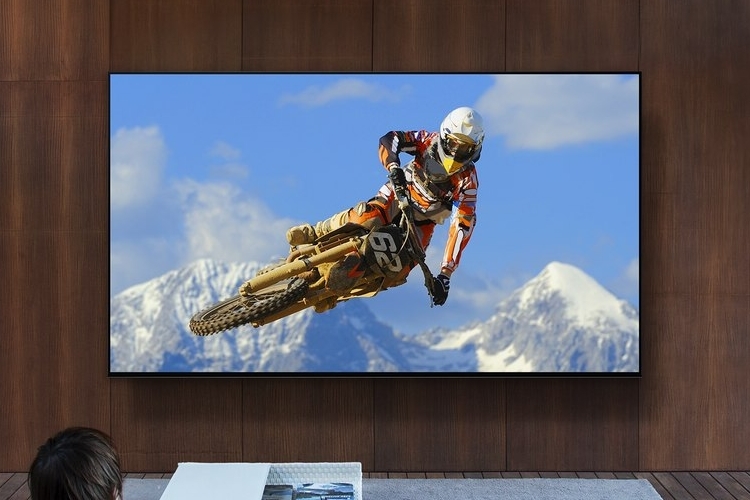 Sony’s newest TV flagship, the Master Series Z9G brings 8K to the masses, ensuring your home TV is adequately equipped to watch 8K content, whenever that comes. Seriously, is there even anything on 8K that you can watch natively on this thing right now? Aside from having four times the resolution of your puny 4K TV, the panel boasts direct LED backlighting, an advanced new upscaling engine to turn those ugly 4K content into glorious 8K, and even a Netflix Calibrated Mode that supposedly allows you to enjoy Netflix originals on the TV the same way you would on a studio evaluation master. It’s available in 88- and 95-inch sizes. 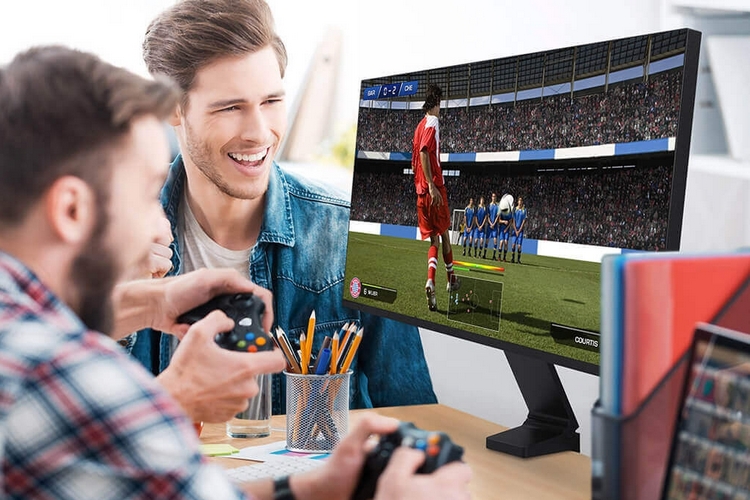 Instead of being set down on your desk, Samsung’s new desktop monitor is designed to be clamp to the edge of the table, allowing it to use up minimal space, so you can put more gear on your desk. The arm holding the screen can be tilted to let you position the screen at a wide variety of angles, while recessed grooves on the same arm allow you to hide the power and HDMI cables, ensuring you can maintain a clutter-free workspace. It comes in two sizes, 27 inches (QHD resolution) and 32 inches (4K resolution), both of them coming with no bezels on the top and sides for a really sleek look. 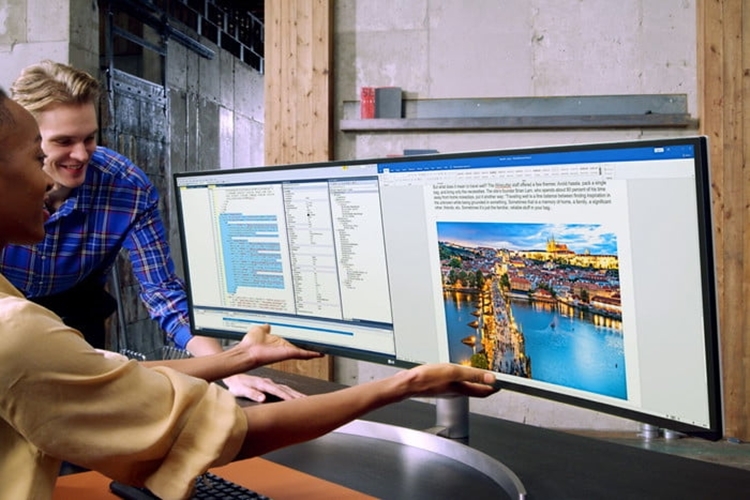 Billed as a “productivity-boosting tool,” LG’s 49-inch curved monitor comes with a 32:9 aspect ratio, allowing it to serve as a functional replacement for dual-screen setups, with its 5120 x 1440 resolution effectively providing users the same amount of pixels as two 27-inch quad-HD displays. Aside from the generous ultrawide profile, the IPS panel also boasts the ability to display 99 percent of the sRGB color space, HDR10 support, and compatibility with LG’s Dual Controller software, so you can use the same peripherals (mouse, keyboard, and monitor) with multiple PCs in a coordinated manner. 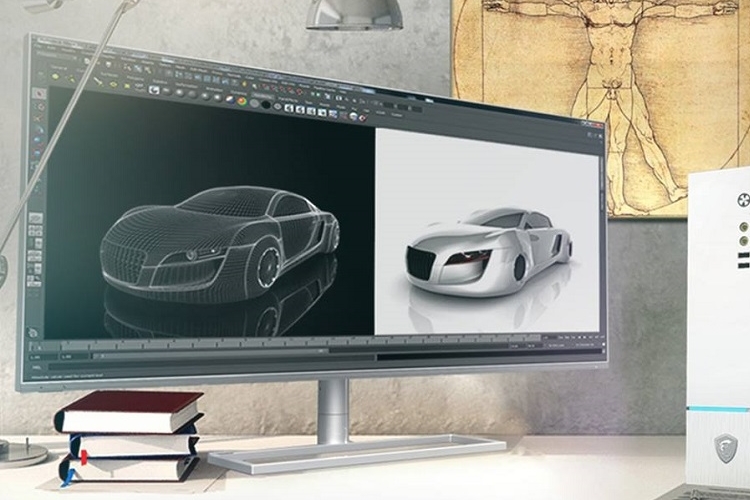 Designed specifically for content creators, MSI’s 34-inch monitor comes with a 5120 x 2160 resolution and a 21:9 aspect ratio, making it perfectly suited for working on videos, graphics, and animations, but with a 60Hz refresh rate, it’s totally underpowered for gaming, so you won’t be tempted to fire up a game of Black Ops V. Well, maybe you still will, but wouldn’t you rather be gaming on a 120Hz display? It comes out in June. 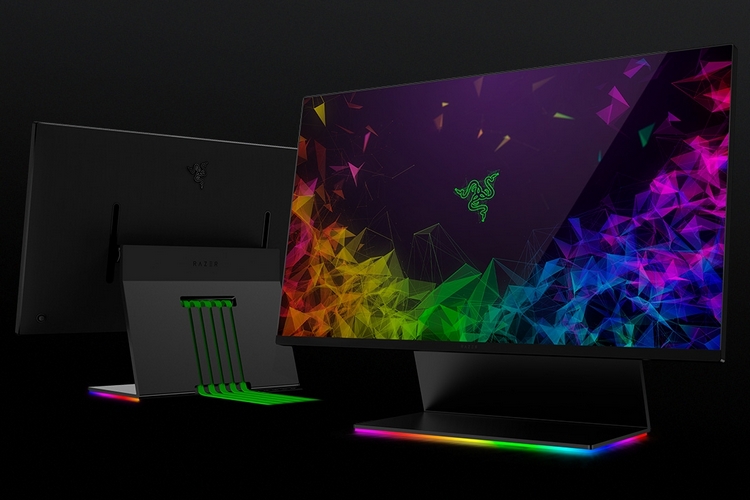 Razer’s first gaming monitor gives users a 27-inch IPS panel with a 2560 x 1440 resolution, a 144Hz refresh rate, and a one millisecond response time, so this should support most of your gaming needs, unless you prefer staring at 4K graphics. Other features include 420 nits of brightness, 95 percent coverage of the DCI-P3 color gamut, and support for a few vital display technologies out there (HDR400 and AMD’s FreeSync 2, with Nvidia G-Sync currently in the works). Like other Razer products, this looks sleek, with machined aluminum for the frame, base, and stand, all while getting subtle Chroma integration right beneath the base, so the lights won’t affect your gameplay whatsoever. 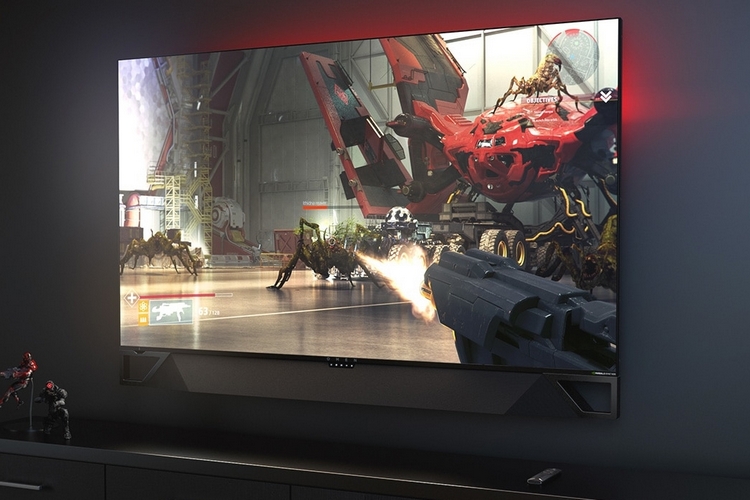 Ever wished you can play PC games on a giant screen like people do on a console without sacrificing the high refresh rates and response times that you’re used to? Now you can with the first Big Format Gaming Display (BFGD) in the market. Called the HP Omen X 65 Emperium, this 65-inch beast boasts 4K UHD resolution, a 144Hz refresh rate, 4-millisecond response time, and Nvidia G-Sync support, ensuring it will display your most graphic-heavy games in their full glory. Blurring the line between TVs and monitors, it can be fitted with an integrated soundbar that packs three stereo amps at 120 watts, all while coming with a Nvidia Shield built-in for native access to Android apps and the Google Assistant. 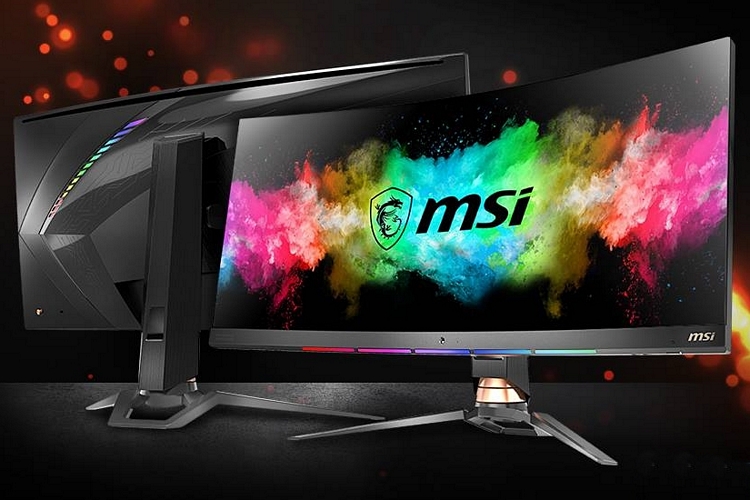 While it looks like just another curved gaming monitor, MSI’s new 34-inch Optix model brings something fresh to gamers – the ability to control in-game action using voice commands. Sadly, it won’t be with every game. Instead, it will only be for games that have intentionally been made compatible with the system, so MSI should have some work cut out trying to get developers onboard. There’s also a camera along with the mic, both of which the monitor will use for its built-in virtual assistant (no word on which one it’s using). As for the monitor itself, it comes with a 3440 x 1440 resolution, a 21:9 aspect ratio, a 144Hz refresh rate, and a 1 millisecond response time, along with a camera mount on top for streamers. It launches in June, priced at $899. 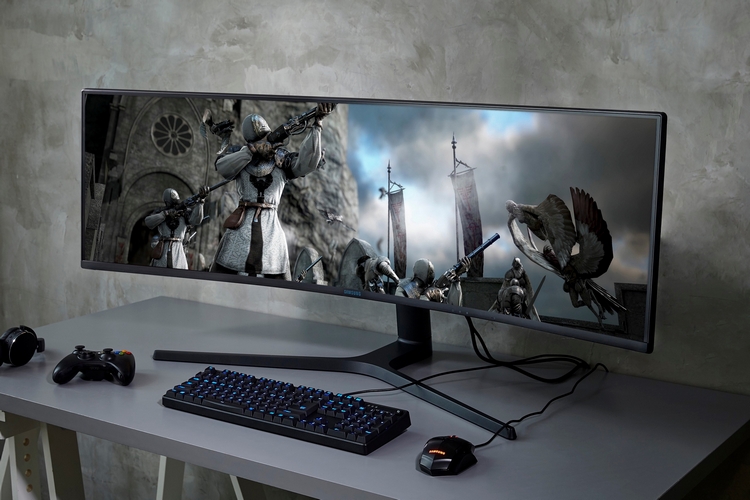 Bought one of Samsung’s curved 49-inch CHG90 monitors when it launched last year? Well, prepare to want to upgrade this year, as the outfit is releasing a worthy successor that brings considerably higher resolution and brightness. Called the CRG9, the 49-inch curved gaming monitor brings a 5120 x 1440 resolution in a 32:9 aspect ratio, along with 1000 nits of peak brightness, 178 degree viewing angle (both vertical and horizontal), a 120Hz refresh rate, and 4-millisecond response time. It supports both AMD FreeSync 2 and HDR10, so expect excellent contrast and color accuracy even in the most fast-paced action moments. 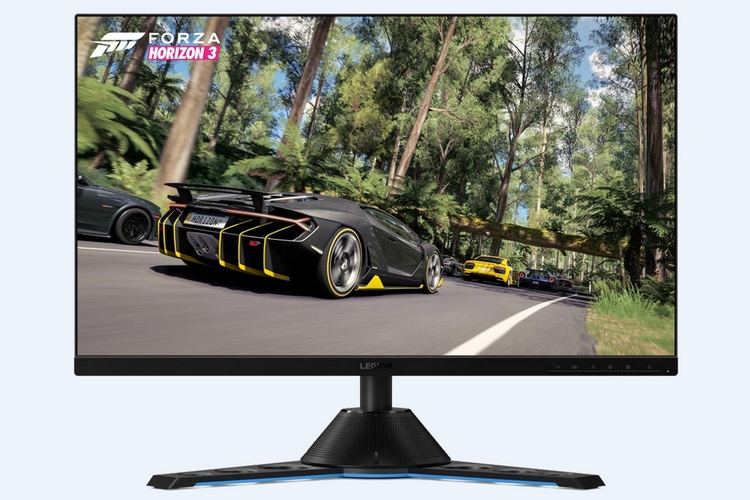 Don’t care much for curved and ultrawide panels? Lenovo has something right up your alley – a 27-inch monitor that delivers 1440p resolution at an insane refresh rate of 240Hz. Yes, that’s not a typo, making it the first monitor in the market to have this resolution and refresh rate combination. It also boasts 90 percent coverage of the DCI P3 color gamut, a sub-millisecond response time, and Nvidia G-Sync support, so it has all the gaming basics handled just fine. The Legion Y27gq launches in April, priced at $1,000.