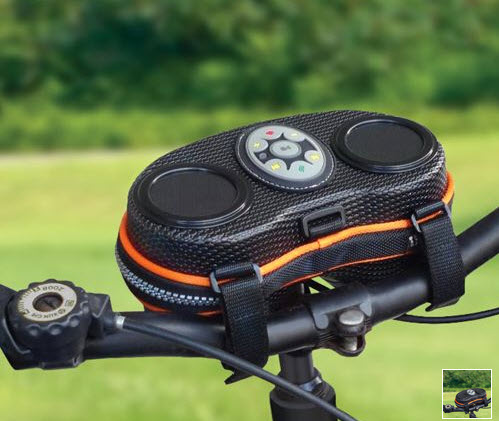 Bike-mounted commuters can do that “I’m so busy, I need to call while I’m driving” crap, too.  Heck, they can even do it so that everybody within the vicinity hears their conversation.  As long as they have this: the Bicycle Speakerphone.  Take that, busy executives driving fancy cars.

Just like any regular wireless speakerphone unit, it connects with your handset over Bluetooth, giving you the magical powers of piping audio from your phone into the speakers.  Unlike them, however, it’s meant to secure right on your bicycle’s handlebars, giving cyclists like you even more ways to irritate nearby pedestrians.  Yay!

The Bicycle Speakerphone is a loudspeaker/case combo that measures 7.75 x 3.25 x 4.25 inches, adding a non-intrusive slab right along your handlebars.   Aside from piping cellphone audio to its 2-watt speakers, the device doubles as a zippered case for holding your phone, along with other small items.

Control panel, which lights up when you have an incoming call, is right on the top surface, sandwiched by the stereo speaker grills.  Only pair of hook and loop fasteners hold the assembly in place, though, so you’ll likely have to remove it and take with you if you’re leaving your bike outdoors.  According to the product site, power is provided by three AA batteries, although there’s no mention of how long the juice will last.

Hammacher Schlemmer has the Bicycle Speakerphone, priced at $89.95.