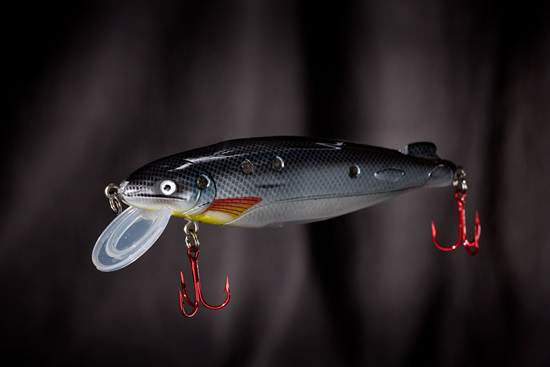 Hate waiting to chance upon a fish dumb enough to take your bait?  Put an end to hours of fishing idly with the BioPulse Lure System, a scientifically-designed bait that the cold-blooded aquatic vertebrates just can’t resist.  Yep, it’s like hypnosis on water.

Produced by Mystic Tackleworks, the modern fish lure takes advantage of the animals’ biology to ensure your immediate success.  Using a whole host of inputs, it compels the gilled water-dwellers to not only inch closer to the your line, they can’t resist the urge to bite.

The BioPulse Lure System was developed by John Caprio of Louisiana State University, a researcher specializing in fish taste and smell systems, with the help of fellow experts Dr. Richard Fay and Dr. Craig Hawryshyn.  According to him, he spent the last 30 years researching the chemosensory systems of a variety of both freshwater and saltwater fishes, documenting the exact mechanisms that activate their taste sensors.  Once this is triggered, built-in nerve reflexes to ingest food prevail and, before they know it, they’re hooked (literally).

Mystic Tackleworks’ resulting lures provide stimuli to numerous sensory systems, including vision, hearing, taste, smell and mechanoreception.  The baits themselves both look and move like harmless food for bigger fish, even going so far as to emit vibrations that mimic preys.  An internal scent-dispenser also releases feeding stimulants in measured doses, along with a series of LED fittings to encourage attacks.  The lures are bite- and shock-resistant, so you can reuse them till you’re sick of catching the slimy swimmers so easily.

Yep, the BioPulse is a high-tech lure, which takes a lot of the sport out of fishing.  If you’re hungry for a grilled fish dinner, though, this should be really, really handy.  Kits (which consist of the lure, feeding stimulant and a bottle of BioFlush anti-microbial cleaning solution) are now available directly from the manufacturer for $33.96 each.