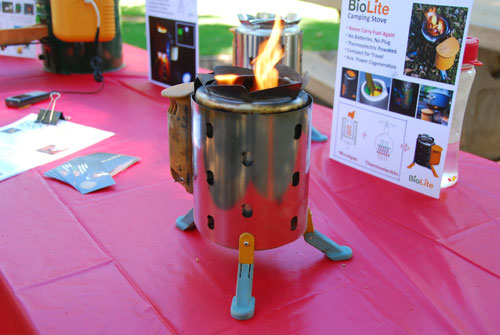 Portable stoves are great. Until you get lost in the woods, run out of fuel and have to eat raw squirrel meat, that is. If only you packed a BioLite Camp Stove, which can fuel itself on practically anything you pick up along the way, you wouldn’t have had this problem.

Instead of conventional fuel, it can start furious fires using underbrush, twigs, small branches, pellets, husks and loads of other materials usually strewn around camp sites. That means you can leave the petrol at home, simply picking up what you need to burn wherever you end up. It doesn’t burn just like regular wood fire, either – the stove is so efficient it can boil an entire liter of water in just four minutes. 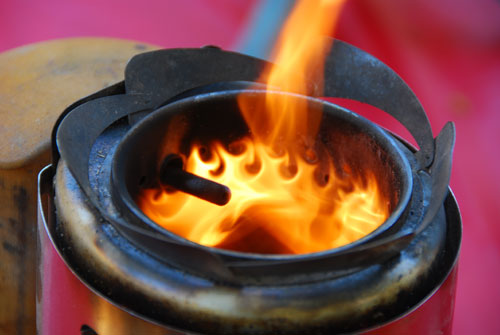 How does it work? First, you pile your sticks and twigs into the BioLite Camp Stove and light it. Once it gets a fire burning, an onboard solid state thermoelectric generator kicks in, which starts a small fan spinning. This fan separates the wood gas from the actual burning wood, then mixes it with oxygen, creating a fire that puts regular portable stoves to shame. As an extra feature, the thermoelectric setup usually gets some energy leftover after cooking your wilderness sustenance (around 1 to 2 watts, according to the site), which you can then use as extra trickle for your gadgets via USB.

Currently in late prototype stage, it measures 7.5 x 4.5 inches (h x d) and weighs 1lb and 10oz. While arguably bulkier than some gas-based camping stoves, the increased burning efficiency and the loss of another item to carry (petrol) should more than make up the difference. It can also fold (errr…slightly) for easy packing.

The BioLite Camp Stove is not yet available commercially, but they’re preparing for a late Spring release. Along with the prototype model,  a smaller, more compact version that’s about 35% smaller is also on the way. No pricing details have been given yet.