This Family Tree Charts How Dinosaurs Turned Into Modern Birds 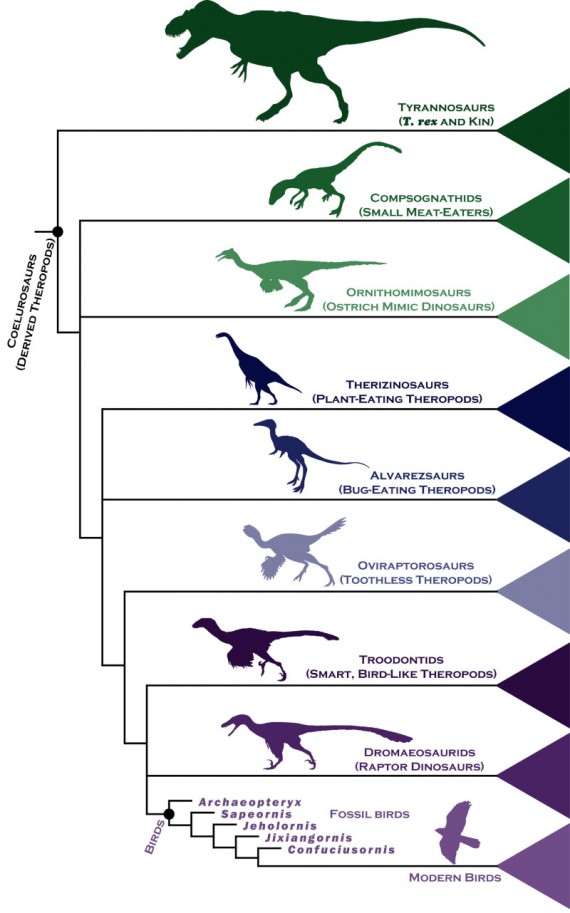 A study recently published in the journal Current Biology included the above family tree, which shows the evolutionary link between dinosaurs and modern birds.  Basically, a long and gradual evolution from the mighty T-Rex and its kin eventually gave birth to the winged creatures you hunted with a slingshot every summer when you were a kid.

Conducted by a team of researchers from the University of Edinburgh and Swarthmore College, the study looked closely at the evolutionary links between ancient birds and their closest dinosaur relatives to establish potential patterns.  To do this, they examined over 850 body features found on 150 extinct species, then used statistical techniques to analyze the findings and assemble a potential lineage.

Based on the findings, the emergence of ancient birds from 150 million years ago was a slow and gradual process.  Little by little, some dinosaurs started exhibiting bird-like body features, which were then passed on and further evolved by succeeding generations.  This evolution is believed to be so slow that, at any point in time during that period, the ancient birds didn’t look much different from the dinosaurs around them.

Which brings us to the question: why don’t modern birds look more like menacing prehistoric creatures?

Using a statistical method developed by Steve C. Wang of Swarthmore College, the team analyzed the findings, including all available data from fossil records, which led to the conclusion that, at some point, birds suddenly experienced a high rate of evolution.  According to Wang, “Once all these pieces were in place to form the archetypal bird skeleton, birds then evolved rapidly, eventually leading to the great diversity of species we know today.”

This finding supports an old theory from the 1940s, which posits that the emergence of new body shapes in a group of species can result in a rapid surge in their evolution.