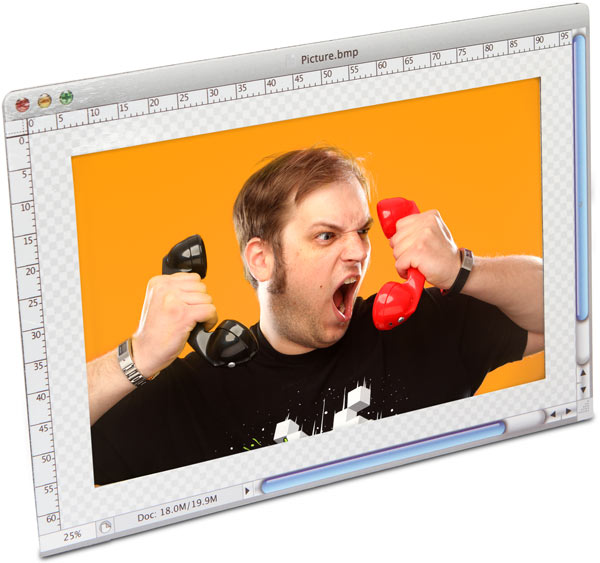 Those pictures of hotties in your Facebook?  Photoshopped.  That picture of you driving a Lamborghini?  ‘Shopped.  That picture you sent mom where you lost lots of weight?  Yep, photo-manipulated.  You fiddle with fake pictures so much, you might as well take it to real life with the Bitmap Picture Frame, which makes even the realest analog-shot photos look like you put it through Adobe’s popular graphics editor.

So, no one wants to believe that picture of you getting smacked on the ass by a half-naked Taylor Swift on your desk is real.  Every time co-workers look at it, they go, “Nice photoshop, buddy,” as if they were saying something snarky and clever at the same time.  With this picture frame holding that photo, any Photoshop comment is too obvious it will just sound lame.  Really lame.  In fact, your co-workers will be so ashamed of their lame wisecracks they’ll be forced to come up with something that’s actually clever and snarky.   Lest, they be forced to shrivel up and hide under a desk.  For eternity.

The Bitmap Picture Frame, whose borders are printed with a Photoshop window, measures 6.5 x 4.6 inches, with a 5.31 x 3.31 inch display area for your printed photographs.  It’s made from steel, props up on table with a peg stand and includes a magnetic bezel that holds your pictures in place against the steel backplate.

If you’re going to display a photoshopped picture, you might as well jump the gun on people who think they can make fun of it.  Makes perfect sense.  The Bitmap Picture Frame is available now for $17.99.

Get The Frame Now