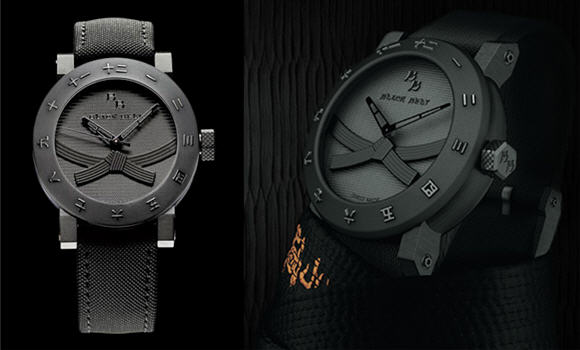 Got a black belt in some obscure martial art that no one else has heard of?  Doesn’t matter how prestigious it is.  If you’ve got the cash, you can be among the “elite” scores of folks who are qualified to buy the Black Belt Watch, a sexy-looking timepiece exclusively for black belt holders in any discipline.

The official press release references the seven virtues of Bushido and the samurai code, neither of which have anything to do with time-telling. Yep, the black belt gimmick is a little trite (seriously, there are McDonald Dojos everywhere), but it’s tough to deny the attractiveness of this timepiece.

Clad entirely in black, the 100% Swiss-made Black Belt Watch features a satin-finished and PVD-treated steel case.  The dial sports a black belt engraving over a kimono-like background pattern, with hands based on the Shinai (those traditional bamboo swords used for practice in Kendo).  As placeholders for the hours, the sandblasted steel bezel is stamped in twelve Kanji characters.  Other highlights include a “For Black Belts Only” 5N rose gold engraving in the back and a processed calfskin/pierced rubber strap.

Designed by renowned karatekas Claudio Alessi and Yvan Arpa, who teamed up with Swiss watchmakers for its development, you’ll need to show an official rank certificate before being able to secure one of the watches for yourself.  If you don’t have one, I suggest hitting the mall, finding the dumbest-looking karate sensei around and signing up for an accelerated course (you know, like a bribe for a fake certificate).

Wear it with an Affliction or Tapout shirt and look like the toughest poser on the block  (Unless you actually train with Chuck Liddell or Lyoto Machida that is) .  Anyway this is one cool watch!