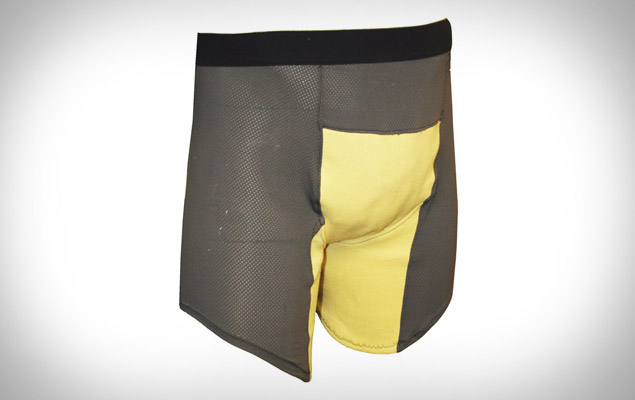 Few things can strike more fear in men’s hearts than the thought of having their crown jewels obliterated.  If that’s a constant worry percolating in your head, there’s nothing that will allay your concerns better than the Blast Boxers, a heavily-reinforced underwear that can give your crotch region armor-like protection.

Developed for use by soldiers in the field, the specialty drawers came about as a way to protect them from perineal and femoral artery injuries, which have become commonplace among individuals within the vicinity of IED blasts.  With its unique protective qualities, the undergarment can help prevent horrifying injuries, such as colon ruptures and…gasp… loss of genitalia.

The Blast Boxers is a unique pair of underwear that’s designed to both keep the wearers comfortable and equip their sensitive parts with some high-level cover.  Areas around the groin and femoral arteries get beefed-up protection using Aramid fabric and double-layer zones of Kevlar.  Aside from being put to test under both blasts and ballistics, they’re fire-retardant, too, severely lowering your chances of injury during those unfortunate occurrences.

For comfort, it uses a light and open structure mesh around the less-hazardous parts, aside from using external seams.  The design looks similar to a pair of two-tone cycling shorts, which means it’s probably not the best sight you can ask for.  With the kind of protection it brings, though, we doubt anyone wearing them will complain.

Folks fearing damage to their man parts (hey, IEDs aren’t the only threats out there) can get the Blast Boxers for $95 each.