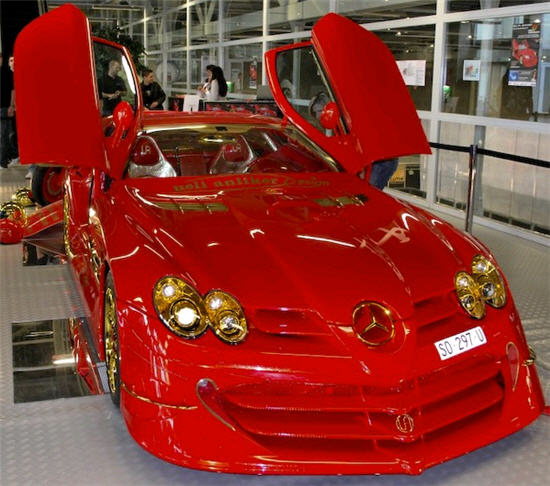 As if being a Mercedes SLR McLaren supercar wasn’t enough to warrant attention, Swiss tuning garage Ueli Anliker Design decided to bling this one to the rafters.  Called the Anliker SLR McLaren Red Gold Dream, the decked-out ride comes in a shiny red finish, adorned with 500 rubies and 24k gold accents.

Surprisingly, the tuning came off extremely tasteful, despite the undeniably luxurious work. With gold and ruby accents exposed, though, this isn’t the kind of ride you want to park in an open spot without anyone to guard it non-stop.  You’ll get petty thieves trying to peel those gold and ruby SLR logo (reimagined as a dollar sign) on the wheel centers in no time.

Various modifications were made apart from the finish. The front, for instance, got a new splitter that looks like a seamless extension to the vehicle’s styling, instead of an after-market piece.  It adds 220 lbs of downforce at the car’s fastest run, bringing the engine’s total power output to 999 hp.

The rear received a smaller spoiler and a revised diffuser, increasing the downforce by another 176 lbs.  For improved driving visibility (apart from making it easier for people to see your exorbitantly-finished car), they added a total of 500 LEDs along the bodywork.  Interior has been similarly altered to reflect the body’s finish, getting gold-painted leather seats along with gold and ruby buttons.

First spotted at the Auto Emotionen 2009 in Aarau, the Anliker SLR McLaren Red Gold Dream took 30,000 manhours and a whopping $4.3 million to put together.  It looks so shiny it hurts the eyes.