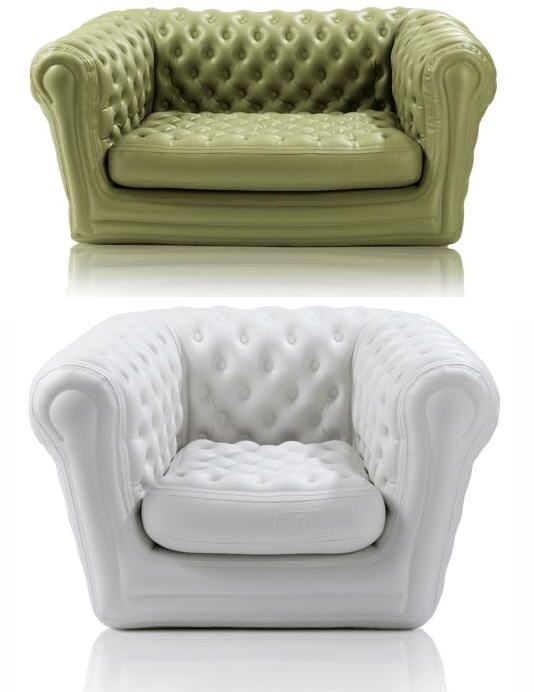 Inflatable furniture isn’t exactly the classiest thing around.  Dutch company Blofield, however, seems intent on changing that, with their new line of Chesterfield-style chairs and sofas that come complete with a premium price.

Instead of the usual playroom and swimming pool uses, the air-pumped furnishings are meant for actual living room installation and has, in fact, earned enthusiastic praise since it debuted in design fairs last year.  According to designer Jeroen van de Kant, the unusual idea took two years of development and testing before it was fully realized.

The high-end inflatables are constructed out of PVC material with vinyl bottoms and can blow-up in as little as five minutes with the included electric pump.  It comes in different seat configurations (one-seater, two-seater and three-seater), with a choice in color (white, gray and green).  They’re even throwing in a repair kit in tow, though I don’t exactly know what that’s for.

While I was initially averse to Blofield’s concept of permanent balloon furniture, I think I’m coming around to the idea.  First, those couches are lovely, despite the undeniably plastic appearance.  Second, if you have guests that you’d rather not have around, you can easily deflate the couch, hide it a corner and pretend to be renovating.  Third, when the polar ice caps melt (yay, more blue beer) and the world gets flooded, you can use it as a raft.  Now, what other furniture can give you that?

Pricing for Blofield’s Chesterfield-style fittings are similarly inflated, with the single-seater chairs starting off at $532 and ballooning up to a little under $1,000 for the three-person capacity sofas.  It’s currently not available to US customers because of the varying voltage systems needed for the pump, but is being readied for stateside release, as well.