Bloodhound SSC, Aiming To Be The World’s Fastest Car 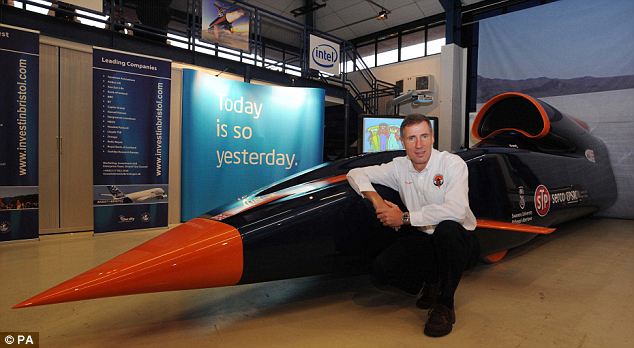 The world’s fastest car will run at over 1,000 mph.  At least, that’s what the British engineers behind the Bloodhound SSC (SuperSonic Car) are hoping for, as they commence work in building the powerful machine.

A collaborative endeavor, the Bristol-based Bloodhound project currently has the support of over 25,000 schools, along with a growing internet following.  The vehicle will seek to dethrone the current land speed record of 763 mph, set by the Thrust SSC back in 1997.  Wing Commander Andy Green, who piloted that record-setting run (along with 20 years of experience flying jets), will also drive the new supersonic ride.

How insane is 1,000 mph?  The Bloodhound SSC will operate via a jet engine from Eurofighter Typhoon, positioned above a 400-kg hybrid rocket (a 14-ft long conventional rocket married to a separate engine pumping fuel).  Combined, the rig will dispense power that’s pegged to be equivalent to 180 Formula One cars, to the tune of 135,000 horsepower.

Sporting a pencil shape, the car looks like a land missile darting onto an unsuspecting target.  Shell will be built from forged aerospace-grade aluminum  that will probably not be enough to keep the poor guy driving it alive in case of a crash.  I mean, 1,000 mph?  Are you kidding me?

The Bloodhound SSC, which is expected to go from 0 to 1,050 mph in around 40 seconds, will make its maiden run on a dried-up lake bed at Hakskeen Pan in South Africa in 2011.  Debris-free and 12 miles long, it should facilitate optimal conditions for the record-breaking attempt.  Not sure if it’s really a car or a rocket, though.  Hmmm….