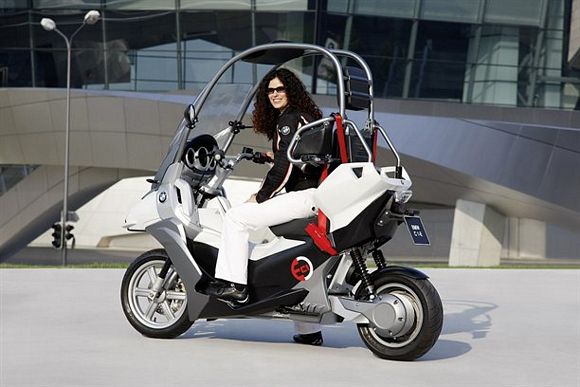 A motorcycle with a roof always seemed like a smart idea, but nothing came out of it when BMW released one back in 2001.   With awkward-looking vehicles running on electric motors becoming more acceptable, though, they might have a better shot this time around.

The BMW C1-E is an electric motorcycle with an integrated roof, combining the economical operation of a scooter with the safety features of a car.  While not currently intended for production, it’s one of the vehicles under consideration for the company’s Mega City line, a range of affordable urban vehicles that will look to compete with Daimler’s Smart division. 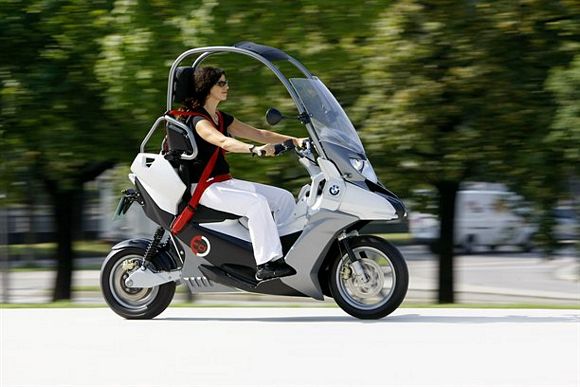 A 27bhp Vectrix electric motor runs the C1-E, powered by a lightweight 125-volt lithium-ion battery panel.  The big update, however, are the car-like safety characteristics, which include a wider body, full overhead roofing, rollover bars, a safety cell, a front crumple zone and a seatbelt.  It also comes with a low profile, raked windscreen and car-like boot.

Top speed is currently pegged at 100kph, with a 0 to 80 acceleration of seven seconds and a driving range of 90 km.  Not bad for a dorky-looking vehicle.  Managing zero emission (at its current configuration) and offering better road economy, I wouldn’t mind sitting my ass behind one.

According to BMW, the bike could get a different mechanism (such as a low-emission combustion engine) if ever it does go into production.  As for now, though, they’re using the C1-E as part of the safety project eSUM (European Safer Urban Motorcycling), which looks to gauge the viability of two-wheeled, single-track systems for improving traffic flow across multiple European cities.