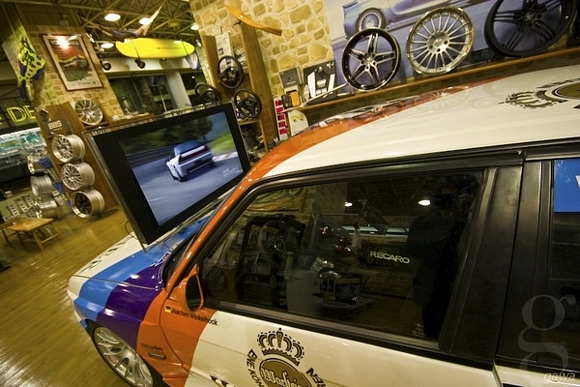 Playing a driving simulator not doing it for you?  Take the realism up to a new level by doing what Japan’s Studie AG did with “The Ultimate Gaming Machine,” tuning a functional car so that it becomes a stationary gaming cabinet.  Huh?!?

It gets worse.  Instead of modifying a throwaway pile of junk, they had the gall to do the deed to a BMW M3 E30, one of the few rare cars that’s achieved universal critical acclaim for its sublime performance and refinement.  Damn. 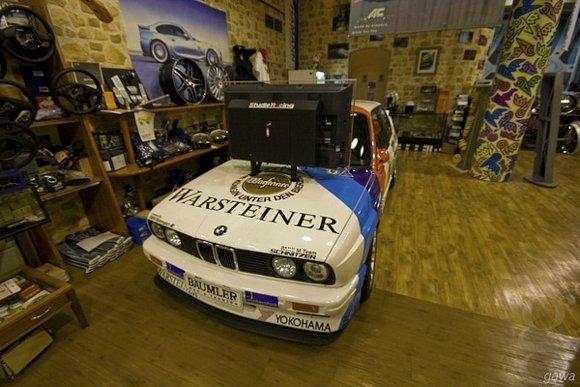 With The Ultimate Gaming Machine, Studie AG basically took the car and threw in a big-ass LCD right on the hood, so that every time you look out the windshield, you end up staring at a Gran Turismo game.  You play it right in the cabin using the car’s actual controls – steering wheel, clutch, pedals – to maneuver your vehicle in the game.

There aren’t any details on other things they set up under the body, so it’s hard to get a grip on whether this is deserving of the “ultimate” moniker.  Hopefully, they integrated some hydraulics in there to make the racer move in tune with the action in the game.  If they did, then I wouldn’t mind them adopting the title.  Otherwise, even the 70-year old corner mechanic at the local dilapidated gas station can probably put the same thing together.

Studie AG has the car on display (and available for playing) at their Yokohama shop, probably for the benefit of visiting customers.  No word on whether the M3 has been permanently altered (please, noooo) or if it’s a temporary installation.