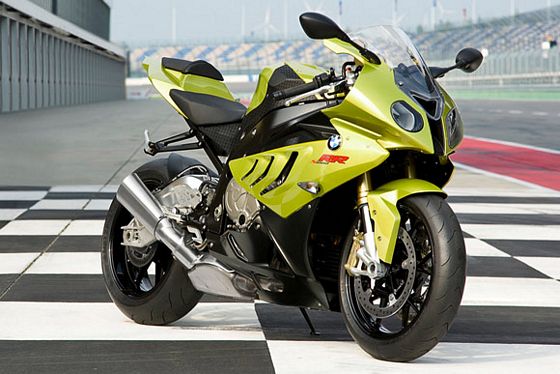 Want a taste of the most powerful 1000cc production bike that money can buy?  Take a gander at the new 2010 BMW S 1000 RR, which lives up in every way to vaunted expectations.  Officially unveiled at the Monza Racing Circuit, the bike is expected to hit most markets starting January of 2010.

With a water-cooled four-cylinder engine producing 193 horsepower and 82.5 lb-ft of torque, it’s easily the most powerful literbike on the market.  It also boasts the best power-to-weight ratio in its class, weighing in at 403 lbs dry and 455.3 lbs with a full tank of gas.

Styling is pretty conventional for a superbike, with aerodynamic lines and lightweight material construction.  There’s little to clue you in that the ride is actually a Beemer, though, as it features little of what’s usually available in the rest of BMW’s motorcycle lineup. Highlights of the specs include specially-developed Race ABS, dynamic traction control, stainless steel exhaust with interference pipe butterflies and four push-button riding modes.

The company has previously announced that the BMW S 1000 RR will come in at a very attractive price.  How attractive an expense a BMW supersports bike could go for is, of course, open to a wide range of interpretation – none of them likely to be in my price range.