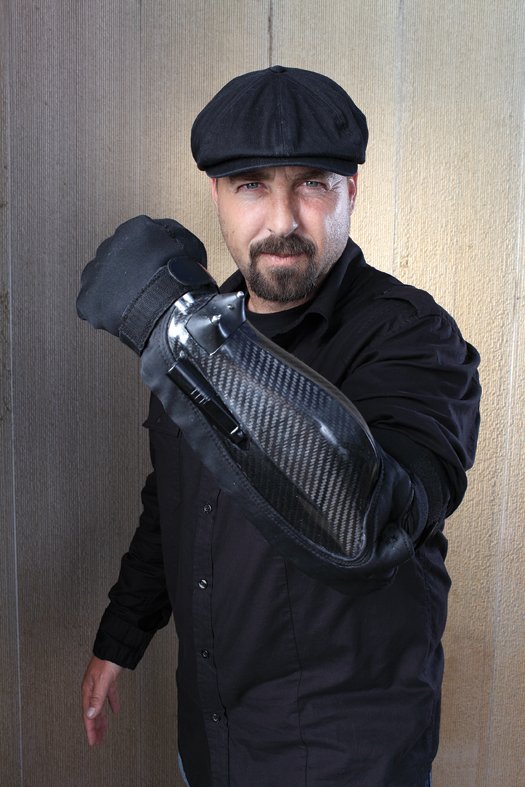 Having consumed my share of superhero cartoons and comic books as a child, it’s disappointing to me that modern law enforcers remain a long ways off from Batman’s crime-fighting gadgetry.  I mean, we don’t even have a proper commercial jet pack yet.   Regardless, we’re probably going to see some wearable peacekeeping gadgetry in the near future and The BodyGuard could be one of them.

An armored sleeve and glove, the contraption covers you entire forearm and hand, giving it a hard shell for protection during potentially violent situations.  You can use it offensively, too, as it’s armed with a taser right on the wrist that you can use to whack volts of electricity into your run-of-the-mill evil henchmen.

The BodyGuard encases your forearm in ballistic nylon, giving you instant defensive superpowers.  It won’t restrict your movement like a steel armor sleeve would either, as the entire assembly weighs a perfectly manageable 3 lbs.  The stunner sits on top of the wrist via protruding electrodes, allowing you to taser would-be attackers with a pimp slap motion (just make sure your wrist connects, instead of the back of your hand).  The electricity is activated using a button on the palm.

While obviously usable by superheroes, the garment is actually intended as non-violent gear for law enforcement types (like prison guards).  As such, it packs a laser pointer and a video camera, too.  The idea is to point the laser at the subject first to let them know they’re being filmed (a suspect who knows he’s on camera is supposed to be more likely to cooperate).  If they ignore it, that’s when you use the stunner to subdue them.

The first demo unit of the BodyGuard will be released to the  Los Angeles sheriff’s department later in the year.  No word on when it will be available for purchase, but I sure hope they don’t restrict sales strictly to law enforcement agencies.