Bolt Lightning Is A Dragster Powered By Six Circular Saws 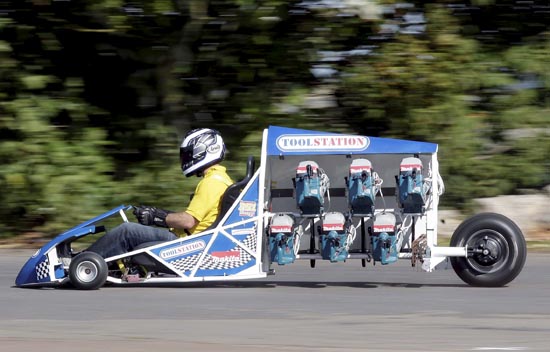 The relationship between power tools and drag racing isn’t really clear.  Except for the fact that most men can’t help but be fascinated by both of them.  The Bolt Lightning mini-dragster, however, marries the two, with an engine powered by six 16-inch circular saws.

An entrant at this year’s Silverline Power Tool Drag Racing Championship in the UK, the saw-powered racer is only one in a large field of competing mini-dragsters with engines ran exclusively by industrial-quality power tools, such as leaf blowers, disc cutters and chainsaws.  Creator ToolStation joins entrants from numerous power tool companies and DIY enthusiasts, along with special guests, The Gadget Show of Channel 5 and America’s Team High Output. 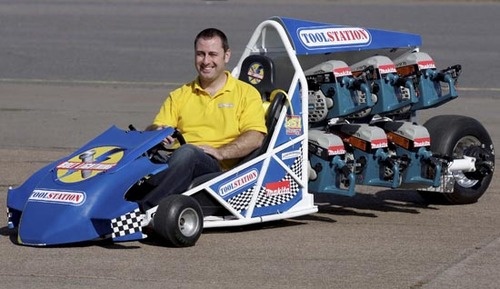 Bolt Lightning is a three-wheeled (two small ones in the front and a bigger one in the back) drag vehicle vaunted to be one of the favorites in the weekend race.  Boasting technology similar to Jenson Button’s F1 car (the one that won the 2008 Driver’s Championships), the engine pumps out 36 horsepower, allowing it to reach top speeds of 75 mph at the course’s 100 meter strip.

Drag racer Barry Lee will drive the vehicle at the races, which should be happening this weekend (September 24 to 25) at the Fleet Air Arm Museum in Yeovil, Somerset.