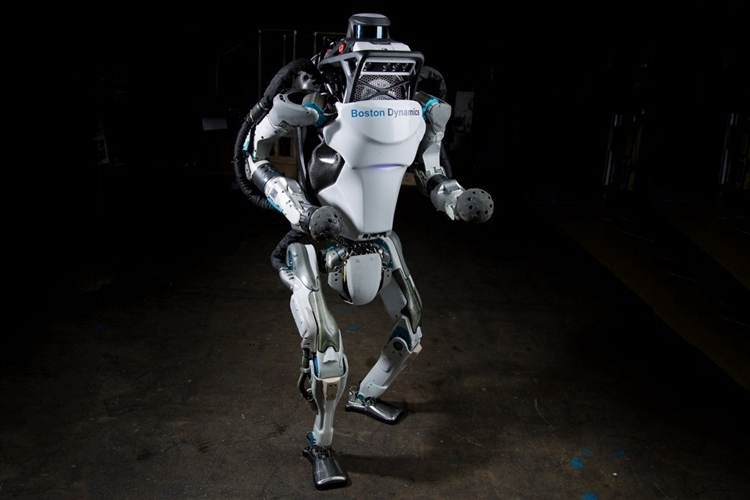 I can’t do a backflip. There are individuals more athletic than me, however, who can nail that thing without even trying. Now, there’s a humanoid that can hit the landing on a backward somersault, too, as Boston Dynamics demonstrates in the latest video for their Atlas robot.

Yes, this is the same robot that the company has been showing walking in different videos over the years. Chances are, you’ve seen some of them, especially ones where the robot is tethered while passing through some basic obstacles or performing some basic tasks like retrieving boxes. This time around, the darn thing looks mighty improved.

In the Boston Dynamics video, Atlas is shown doing box jumps like you’ll see people doing in the gym, showing off its ability to get up in the air and land upright on two feet. To add some extra difficulty, it performs a 180-degree turn during one of those jumps, sticking the landing onto the raised platform just as cleanly as before. The highlight of the video, of course, is the backflip from one of the boxes, essentially turning it into a rudimentary gymnast (or robot cheerleader) of sorts. Now, the robot won’t hit the landing on a backflip every single time (the video shows it failing one time), but the fact that it can is a genuinely important achievement.

Now, you may be asking, why is it important? The significance of this development boils down to one simple reason: bipedal robots such as Atlas aren’t supposed to be able to balance this well. Humanoids have never been the most popular robot design for the simple fact that it’s extremely hard to make them move effectively, since they have to balance all the weight they’re carrying on just two legs. As such, four-legged, as well as wheeled, robots have always been the more efficient design choice, especially if it’s an automaton you’re hoping to bring to market sooner rather than later.

With Atlas, Boston Dynamics weren’t just able to make a bipedal robot that moves effectively, it can also balance so well that the darn thing can hit the landing on a backwards somersault. It’s downright nuts. Oh yeah, the robot looks to be completely untethered now, too, which likely brings it even closer to real-world applications. In case you’re curious about those potential applications, according to DARPA, the main advantage of humanoids is that it can navigate our world the same way humans do, since the world is designed largely for us rather than four-legged and wheeled creatures. As such, it can make for an ideal replacement for actual warm bodies in emergency situations where sending in rescue teams could put further lives at risk.

The current incarnation of the Boston Dynamics Atlas stands 4.9 feet tall and weighs 165 pounds, so it’s just a tad shorter and weighs around the same as an average human. That’s a big improvement over the version from 2013, which weighed a whopping 330 pounds. Check out the video to see the robot in action.