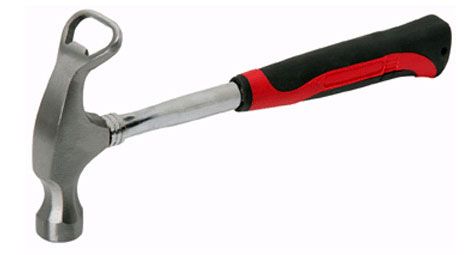 Nothing makes weekend construction projects more enticing than the prospect of a cold brew at the end of the day.  Of course, the fact that you’ll have to wait till work is over kills much of that joy.  Well, let’s put an end to that.

The Bottle Opening Hammer turns driving down nails more fun, by making it easy to enjoy a bottle of  cold beer while you’re doing it.  Rocking a functional cap opener at the other side of the steel head, you’ll never have to break your teeth cracking a Miller Lite open in the tool shed again.  You will likely never finish a single project ever, but hey – you’re happy.

Unfortunately, the retail website advises against using it for actual building activities, claiming it’s not intended to be used for construction.  Actually, I think it is – these guys are just cleverly avoiding the inevitable lawsuit from drunk people who end up breaking their fingers and driving nails on their legs.  Arrrgh!

Rather than actual hammering duties, the near-1-inch strike face is supposed to be used for crushing ice, making it a killer combo tool for beer drinkers.  Even better, it gives you a reason to wear a tool belt while you get drunk, since it looks like it will fit very snugly into standard-sized hammer slots.  Lastly, if you get into a drunken fight, that thing looks like it can leave a nasty mark.

Hammer some nails, crush some ice, pop open some brewskies.  Ahhh, that’s the life.  The Bottle Opening Hammer is available for cheap – only $2.87 from Harbor Freight.