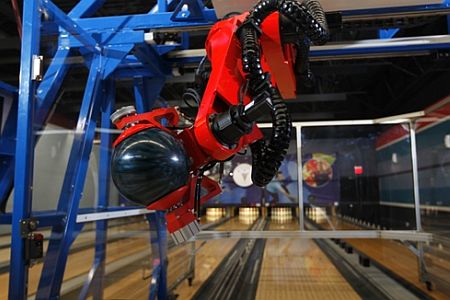 Going up against a bowling robot that can throw at the exact same angle with the exact same power is normally an intimidating proposition.  When EARL (Enhanced Automated Robotic Launcher) went up against PBA superstar Chris Barnes, though, the automaton got creamed, 259 to 209.  What happened?

As it turns out, bowling is as much about coping with the conditions of the lanes as it is about being consistent.  Since the robot throws down the ball at the same spot every time, it diminishes the oil content at that part of the floor, changing the result of its shots the further the match goes.  Score one for the humans…at least, for now.

Used by the Equipment Specifications and Certifications team at the United States Bowling Congress (USBC), EARL can simulate any type of bowling style, with a consistency and accuracy no human bowler can be expected to achieve.  It was named after bowling great Earl Anthony, who went by the nickname “The Doomsday Stroking Machine” during his heyday, amassing 41 titles and six bowler of the year awards on the PBA Tour.

The robot’s primary role is testing game and design equipment, including lanes, balls and pins.  It can deliver strokes at speeds between 10 to 24 miles per hour, with rev rates between 50 to 900 rpm.  Since it can throw the ball using the exact same stroke over and over, it allows for the kind of repetitive testing that no human bowler can be capable of.

You can watch EARL in action at the video below.