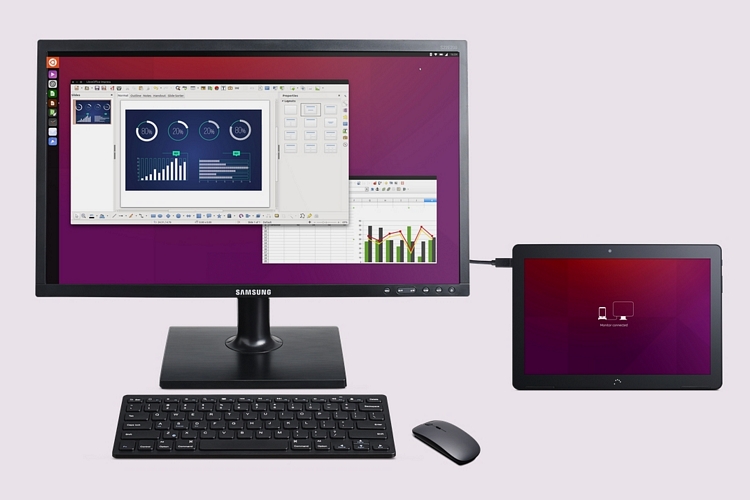 It’s hard to sell any machine running Ubuntu, especially since both mobile and desktop computing have their own stalwart platforms that aren’t going away anytime soon. Still, we can’t help but feel there’s a market out there somewhere for the BQ Aquaris M10 Ubuntu Edition, a 10-inch tablet running Canonical’s unified operating system.

Similar to Windows 10, this version of Ubuntu is designed for both mobile and desktop experiences, allowing you to use any device running it as a standalone phone or tablet, as well as a desktop PC once plugged to an external monitor. That’s exactly what BQ’s Ubuntu-powered tablet brings.

When used as a regular tablet, the BQ Aquaris M10 Ubuntu Edition works like a mobile device, interacting via gestures and running apps using a full screen interface. It also offers a split-screen mode for running two apps and having them share the screen real estate at the same time. When plugged into a secondary display via HDMI, the interface changes, switching from the mobile-friendly fullscreen mode to a window-based UI. Just plug in a mouse and keyboard to start working like in a regular PC.

It has the kind of specs typical of most current-gen tablets, including a 10.1-inch display with 1080p resolution, an 8.0 megapixel camera with dual flash, front-mounted speakers, and a micro-HDMI port. Power comes courtesy of a 1.5GHz MediaTek quad-core CPU, with 2GB of RAM, 16GB of internal storage, and a microSD slot that supports up to 64GB.

No pricing yet, but the BQ Aquaris M10 Ubuntu Edition will be available globally in the second quarter.