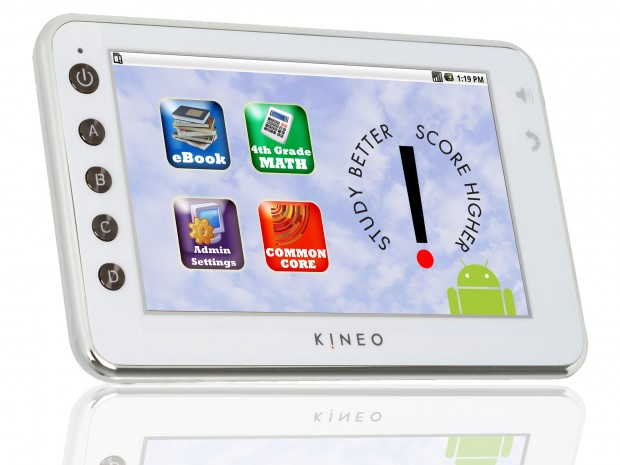 Computers are now used extensively in many classrooms, both as an aid to ongoing discussions and as a teaching tool all on its own.  Since modern tablets can do many of the things a computer can, all while being much more portable and easy to handle, it only makes sense that they’ll be suggested as potential replacements for large, bulky PCs.  The Brainchild Kineo Tablet is designed for that.

Running a customized Android 2.1 build, the tablet can run all of Brainchild’s existing web-based apps for assessing a student according to state standards and teaching various skills.  That means, it can do all the things school programs that currently use Brainchild will need a computer for, making it a smaller and, potentially, more engaging replacement.

Being meant for educational purposes, the Kineo has relatively modest specs.  Display is a 7-inch touchscreen with 800 x 480 resolution, paired with an 800Mhz processor and 256MB of RAM.  It also has WiFi, 2GB of onboard storage, a 4,500 mAh battery (rated at 10 hours of use), stereo speakers and a smattering of ports (HDMI, microSD, USB and 3.5mm audio).

There’s a browser app, of course, for accessing all the web-based content, as well as an MP4 player and a Flash player app.   It comes with built-in security that allows teachers to restrict what websites students can use (that means, forget about checking your Facebook in class).  Results from tests taken by students on the tablet are automatically synchronized with GlobalSYNC, allowing teachers to immediately check them over the web.

Obviously, the Brainchild Kineo Tablet will be marketed to schools who can afford to supply some decent gadgets to students in their classroom.  We’re not exactly clear on the benefits of this approach, but we’re sure one of Brainchild’s account executives will gladly explain if you give them a call.  Price is $299 with shipping slated for March.