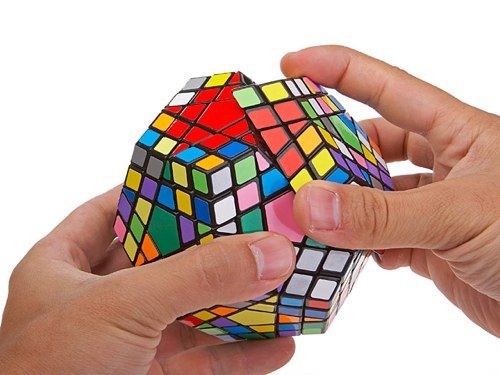 We get it.  You’re smart.  No need to solve Rubik’s Cube for the 6,000th time to prove it.  I’d like to see you exercise that brain on Brando’s latest toy, however.  Called the….wait for it…. Magic GIANT 12-Surface IQ Pentagon – Fantastic Edition, it’s a lot of name for a lot of puzzle.

As the name suggests, the creation takes Rubik’s Cube and makes it ridiculously more complex.  Instead of six sides, you now get twelve different surfaces that require even more intricate maneuvering to properly solve.  Personally, I can’t understand how it’s supposed to work.  In fact, reading Brando’s wonderful website is likely to just leave you more confused.

Dimensions are approximately 10 x 10 x 10 cm, so it’s not as much of a GIANT as its name implies.  Effort required should be humongous, though.  Look at that thing – can anyone even really solve that without going through seven seizures and a nasty divorce?

Brando claims that it’s the world’s most complex IQ challenge game, “improving both your IQ and EQ” and providing “left and right brain training”.  Knowing the company, though, they probably pulled those descriptions out of their nostrils.  Who’s going to dispute the claim, anyway?  Not me.  I can’t even solve Rubik’s Cube, much less a shape I can’t comprehend.