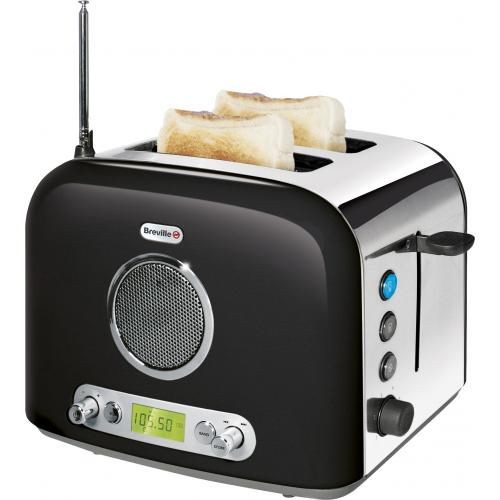 I don’t have a bread toaster.  Why?  Because an oven toaster can toast bread just as well, all while being more versatile.  If I had seen this Radio Toaster, however, I probably would have thought twice about that purchase.

Unlike what the name may suggest, it’s not a contraption for toasting your old radios.  That’s just stupid.  Everyone knows you’re supposed to sacrifice old AM/FM radios at an altar with a goathead hanging over it when you want to lay them to rest.  Duh.

The Breville Radio Toaster is a two-in-one appliance, combining both a two-slice bread toaster and an old-school AM/FM radio.    Why?  Because you just might happen to want to listen to the news while making breakfast, of course.

The toaster part has adjustable slots to accommodate different slices of bread, as well as an extra high lift for avoiding burnt fingers.  It comes with variable browning control , a reheat mode and a defrost feature that lengthens the toasting time, just in case you keep your bread in a freezer (hey, you never know).

Sporting a black front finish, curved top and a silver circular mono speaker in the center, the appliance carries a retro radio feel, almost ensuring it’s going to end up as an attention-getter in the kitchen.  Knobs, buttons and a small LCD sit under the speaker grill, while  a pull-out antenna sticks out from the top.  It can also be used to play tunes from your cellphone or music player, via a 3.5mm jack.

While the Breville Radio Toaster isn’t in stores yet, it’s supposed to be coming out real soon.  Price is expected at around $80.