Brewer’s Cow Is Ice Cream Made With Beer 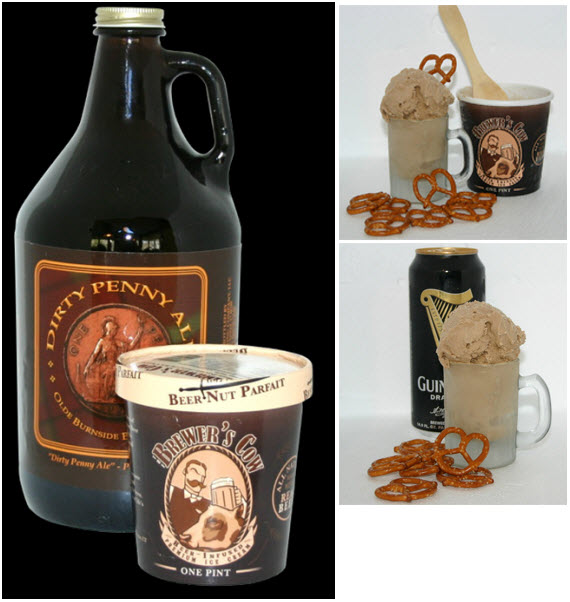 Beer and ice cream have always made for an unlikely but delicious match.  Think beer floats.  Brewer’s Cow takes the union a step further, literally pouring beer into their commercial ice cream machines to turn out these beer-infused creamy frozen desserts.

Bandied about as “the best beer infused ice cream in the world,” the alcoholic beverage isn’t just thrown in for novelty.  In fact, it’s central to the taste, with the desserts supposedly exhibiting the malty characteristics and flavor of the beers used in each of them.

Brewer’s Cow currently has three flavors: Black & Tan (made with Guinness), Ten Penny Beer Nut Parfait (made with Ten Penny Ale) and Bavarian Brittle (made with Samuel Adams).  All are 100% natural, with no artificial colors or flavorings used.  The desserts are sold in pints as six packs, with each set pimping two pints of each flavor.  A fourth flavor, Chocolate Truffle Stout (made with Thomas Hooker), is listed as “coming soon” on the website.

I’ve never ever tried any beer-flavored ice cream before, so I don’t have the necessary context to speculate on what these things taste like.  They do look tasty, though.  Plus, I can’t even begin to imagine the meta awesomeness of making a beer float using ice cream with beer on a glass of beer in a seeming endless loop of beer goodness.  Which, of course, you can chase down with even more beer.

Six packs of Brewer’s Cow Beer-Infused Ice Cream are available directly from their website.  Price is $67 (plus $12 shipping).