Bridgestone Airless Tires Use Spokes Instead Of Air 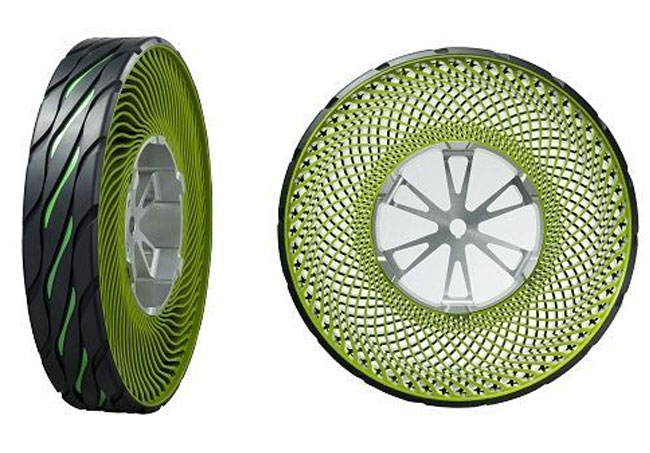 Modern tires are awesome.  Especially when compared to Fred Flinstone’s clunky one-piece rock tires from the Stone Age.  Still, they can get better.  And Bridgestone’s new Airless Tires just might be that evolution we can look forward to.

Like the name says, these tires don’t rely on air pressure for shock absorption.  Instead, they use an intricately-designed set of thermoplastic resin spokes to support the load.   The spokes run on the two sides of the tires, both radiating out from the inner hub to the outer rim at a 45 degree angle in opposite directions.

The outer rubber layer looks like any conventional tire, with the sides likely to be decked the same during actual implementation (since those spokes are just begging to be dirtied up).  Basically, it’s the unique design of the resin spokes that provide the necessary load-bearing and shock absorption, removing the need for air pressure to ever become a factor again.

Aside from being functional tires, they’re also made from recycled rubber and plastics.  Once a tire is worn out, you can simply have them recycled, instead of throwing them out as more landfill fodder.  The bad news: you can’t use them to train with your SISU Sledgehammer anymore since you’ll just end up smashing those spokes to bits.

Of course, we’d have to see the Bridgestone Airless Tires in action (preferably running over broken glass and those spike things police roll out when trying to stop a fugitive in a car) to gauge how well it performs the deed.    It’s currently on show at the 42nd Tokyo Motor Show.