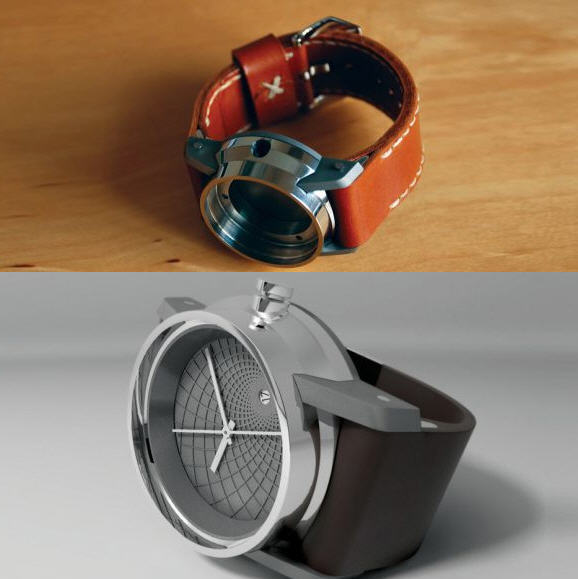 While I don’t exactly get the automobile influence, these new timepieces from car designers Andy Shaw and Robert Silkstone sure look like glorious items to wrap around your wrist.  Called the Brittanic and Vanguard Precision, both models will be limited-edition releases with a very scant run (only 15 units apiece).

Under development from Industrial North Design for close to two years now, the watches are produced using both traditional manufacturing techniques and modern precision engineering methods.  Drawing inspiration from automotive development, Geodesic domes and various other influences, the timepieces are unusually unique while looking decidedly attractive.

Both models use a 26 mm-wide 316L stainless steel body that’s been spark eroded and wire-EDM machined, with a CNC-machined inner case held by six 10 BA screws (the rare variety used in the days of the British Empire, believe it or not) and laser-cut dials.  The Brittanic model features a sterling silver face with a Fibonacci-inspired pattern.  The Vanguard-Precision, on the other hand, sports a locally-inspired design that tries to represent the cloth mills of Northern England.

No word on the time-telling mechanism, but the thing looks so good, I’ll wear it even if the hands don’t move.  With that case being so deep too, you can probably fit in a second watch case in there to actually tell the time.

Each piece will carry local Northern England slogans on the backplate and is scheduled to ship within the next eight weeks.  Price is £5,000 (around $8,280) for each watch and they’re currently available for preorder.  You can see videos of the manufacturing process on the official site’s blog.