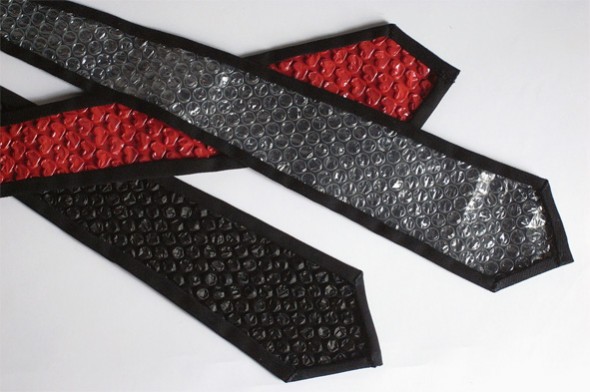 As the name implies, it’s a wearable office necktie for your business attire, except it’s clad in bubble wraps to give you something to fiddle with during tense moments and dull meetings.  Nibbling on your fingernails and pulling on your split ends kind of gives away your anxiety, after all — looking like you’re adjusting your necktie doesn’t. 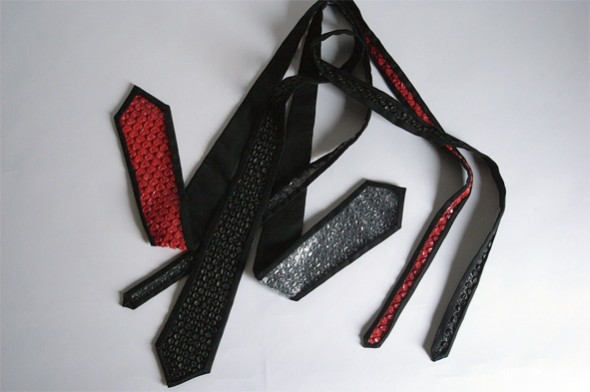 Don’t worry, you won’t look like an idiot with bubble wrap hanging around your neck either. The Bubble Wrap Necktie is actually all business in front and looks like a regular black cotton tie.  Gander around the back, though, and you’ll find the plastic “poppables,” ready to relieve your stress throughout the course of the day.

Designed by a Japanese fellow, I’m surprised this didn’t become an actual product.  I mean, Bandai released slabs of bubble wrap that hangs on keychains not too long ago (the Mugen Puti Puti) and this is way more useful than that.  But, alas, this awesome tie doesn’t appear like it’s meant to be.

The Bubble Wrap Necktie might just be a concept product, but it’s as awesome a novelty product idea as I have ever seen.  Except, probably, when it comes time to wash the thing.  Check out the link below for the designer’s product page.