BugASalt Shoots Down Flies And Insects With Salt Bullets – Awesome! 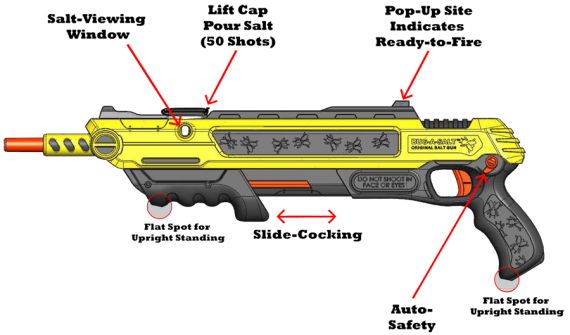 You’ve stocked your giant gun safe with every zombie defense weapon you can find.  And you’re pretty sure you’re also well-prepared if the apocalypse brings aliens instead.  But what if it ends up being a swarm of pesticide-resistant insects that end civilization as we know it?  What will you do then?  The Bug-A-Salt might prove to be your most useful handheld weapon yet.

While it looks like a run-of-the-mill Nerf gun, it actually doesn’t shoot silly foam arrows.  Instead, the plastic weapon of war lets you wage battles with small insects like flies and mosquitoes by weaponizing the ordinary table salt.  For real.  That way, you can kill skeetos and bugs by gunning them down, instead of polluting your home with chemical insecticides and all that foul-smelling junk.

You know those smartphone games that lets you sniper the crap out of flies?  Well, screw that and get the real thing here.  The Bug-A-Salt is a miniature shotgun that uses granulated table salt for ammo, complete with slide-cocking action, an auto-safety button and a trigger.  For every shot, it will hurl a pinch of salt (several granules) through the air, maximizing your chances of hitting targeted insects with just one pull.  According to the website, the salt compartment can hold an average of 50 shots when full.

Maximum range is only 5 feet, so you can’t exactly shoot at targets from afar.  That might actually be a good thing since more distance increases your chances of missing — and this thing looks like it can literally blind people if you hit them in the eye.  It works with no batteries, too, making it perfect for a post-apocalypse world ruled by stupid insects!

The Bug-A-Salt is currently listed at Indie-a-GoGo awaiting backers.  It’s recently surpassed the target funding, so cross your fingers and hope this thing goes smoothly into production.  The world might need it. Don’t forget to watch the video below of Bugasalt in action.