BugJuggler: This 70-Foot Robot Will Juggle Cars In Mid-Air 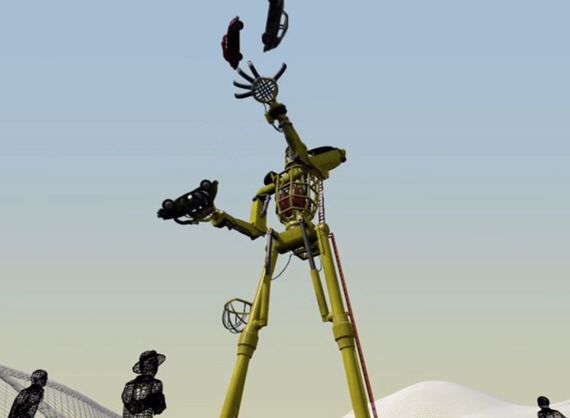 This is the BugJuggler.  It’s a robot.  That juggles cars.  It’s awesome.

Towering a huge 70 feet, the gigantic automaton will take 1,800-pound Volkswagen Beetles in its hands and hurl them up the air in alternating fashion.  It will use hydraulic accumulators for rapid movement, allowing it to juggle up to three cars simultaneously.  Like many robots, it’s going to do that to bring mankind some momentary amusement.  Until the time they revolt and use all those abilities to crush us all, of course. 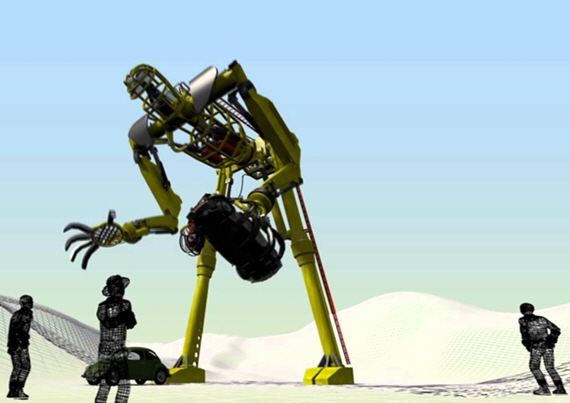 The BugJuggler won’t perform its juggling tricks autonomously.  Instead, the moving arms will be controlled by an actual human wearing computerized gloves that can simulate the feel of what the robot itself is holding in real time via a haptic feedback mechanism, all while following the lead of the human’s arm and hand movements.  The control mechanism can be installed either on a room a safe distance from the robot (so you don’t end up getting flattened by a bad catch) or on the cockpit integrated in its head.  From what we can tell, it isn’t being designed to walk, so there’s no need to worry about this thing going King Kong and wreaking havoc in your city.

Unfortunately, the robot doesn’t exist yet.  Instead, it’s just an idea being pursued by former NASA technician Dan Granett and two collaborators.  They’re currently pursuing funding and sponsorship for BugJuggler with a crowdfunding campaign, where they’re hoping to attract individuals and companies who would like to dabble in this downright outlandish undertaking.