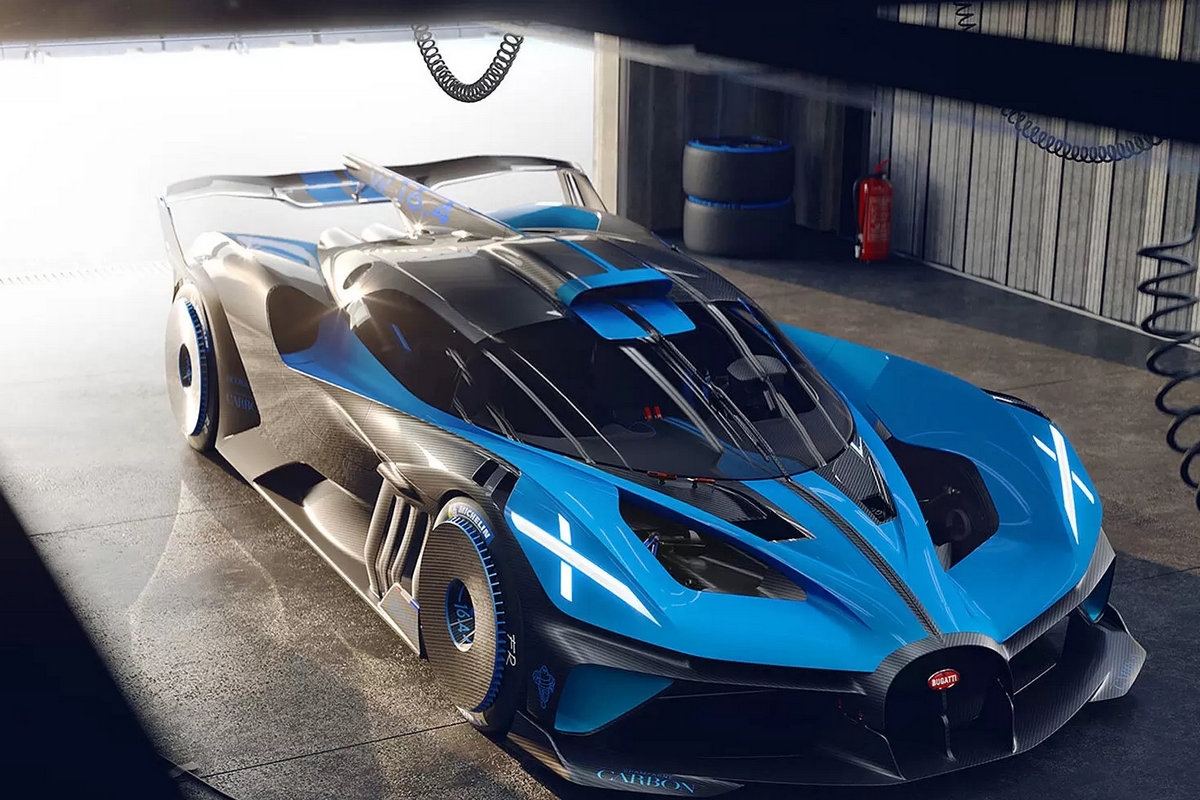 For the last 20 or so years since it returned, Bugatti has placed its focus on making stupidly fast, absurdly powerful, and excessively luxurious cars. And we’re talking about spoil-yourself-silly levels of luxury here. For the Bugatti Bolide, though, the French carmaker sets luxury aside in favor of their racing heritage, turning out a car that puts speed and power front and center.

A completely new track car, the vehicle takes the iconic W16 engine and puts it in a body that’s built around minimalism and aerodynamics. The result is a car that Bugatti describes as “the most extreme, uncompromising, fastest, and lightest” they’ve made in the last two decades. You know, the kind of car that can make the Veyron or the Chiron feel somewhat pedestrian affairs. 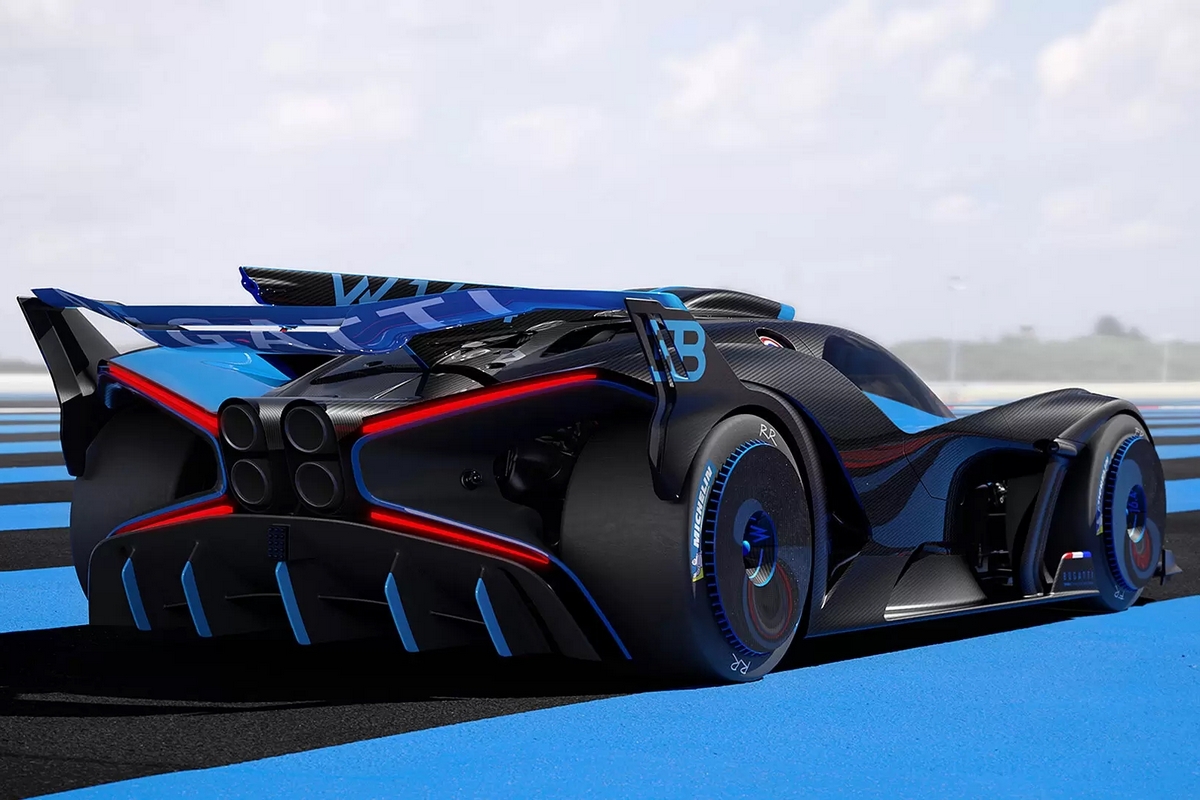 The Bugatti Bolide uses the same quad-turbo 8.0-liter W16 that’s powered their most recent hypercars, with this particular configuration putting put 1,825 horsepower and 1,364 pound-feet of torque, which would be enough to let it reach top speeds of 310 mph and take a lap of Le Mans in around 3:07. This is, of course, a modified version of the engine, with four newly-developed turbochargers to build up boost pressure and power at higher speeds, along with derestricted intake and exhaust systems that deliver a more instantaneous response. It even gets a new oil system that’s been raised to cope with the high centrifugal forces the car will experience on the track.

Designed for lightweight performance, the car has a dry weight of just 2,734 pounds, creating an absolutely ludicrous power-to-weight ratio. They managed to achieve that weight with an array of weight-saving techniques, including a new carbon monocoque specifically developed for the drivetrain, high-strength carbon fiber for the underbody and integral front end, titanium fasteners, a variety of hollow components, and the extensive use of lightweight 3D-printed materials. To ensure it holds up to the high-speed demands of the track, all the composite materials boast tensile strength and stiffness that, the outfit claims, offer resistance figures comparable to materials used in the aerospace industry. 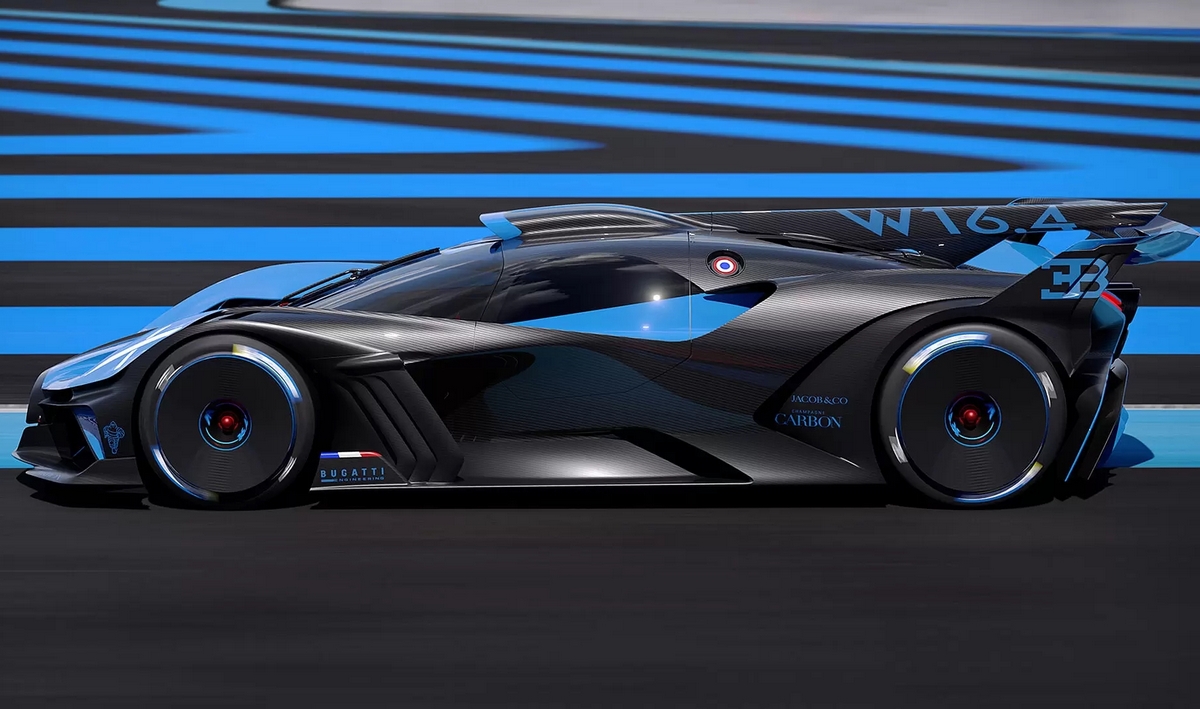 The Bugatti Bolide, of course, revels in aerodynamic innovations, too. These include a highly-athletic body that makes extensive of wings and flaps to generate 5,732 pounds of downforce at 199 mph, as well as a roof-mounted intake scoop with a skin that morphs to provide active airflow optimization. At low speeds, it stays smooth like usual, all while changing into a field of bubbles that bulge out at high speeds, reducing the scoop’s aerodynamic drag by 10 percent and the lift force by 17 percent. 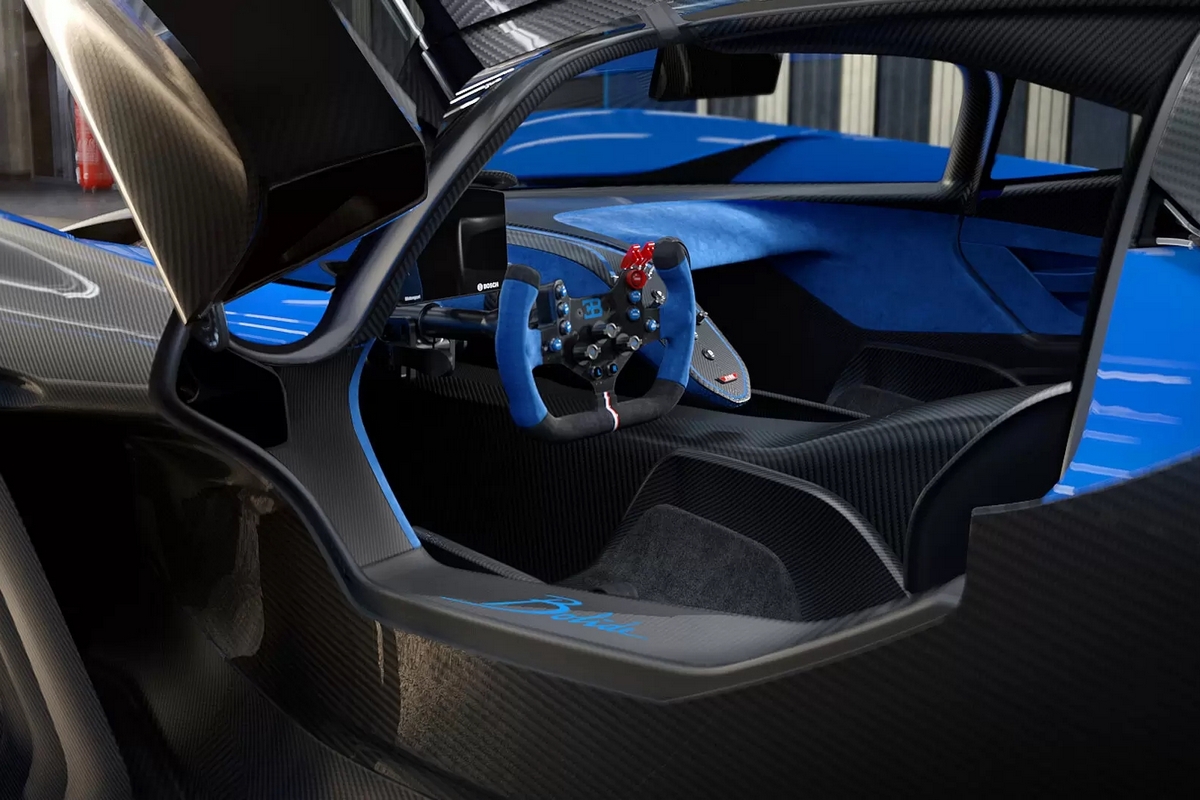 Inside, it has a two-seat cabin with little wasted space. The seats, for instance, are fixed in place, making it difficult to use for taller individuals (people over 6’5’’, according to Bugatti), with the low-slung profile requiring you to follow a specific ritual for getting into the cabin, namely sitting on a sill, placing your feet in the foot well, and shifting your weight into the seat until you’re set. Once there, you get a rectangular steering wheel, adjustable pedals (up to six inches of travel), and a digital display for keeping track of vital information. 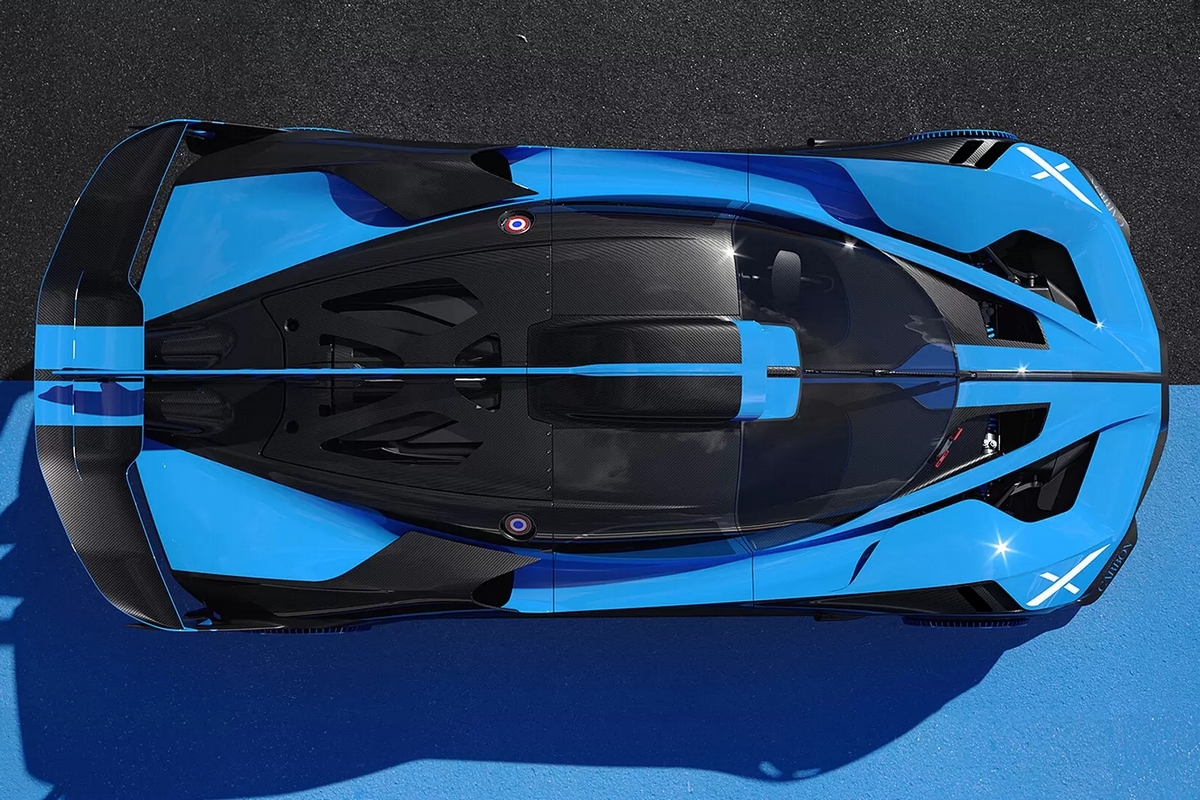 The Bugatti Bolide is only a concept for now, although we wouldn’t be surprised to see it as a limited-edition production model somewhere down the line. 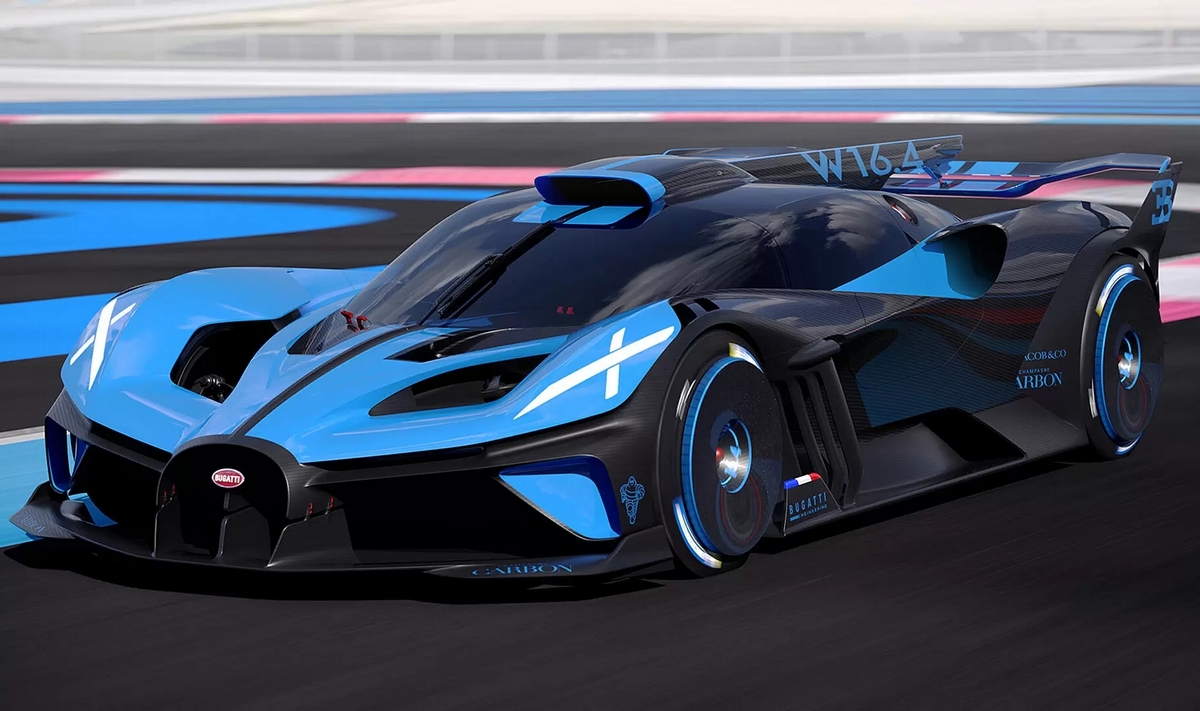