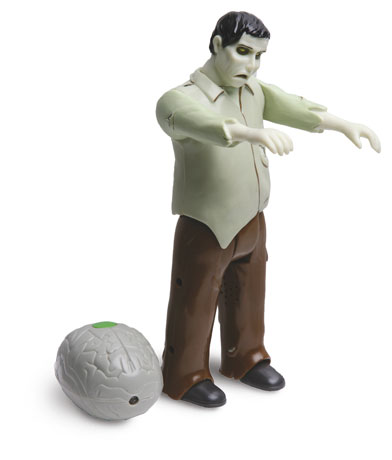 Thinking of dressing up as a zombie for this year’s Halloween?  Take it up a notch and bring an army along.  The Remote Control Zombie is a walking robot, clad in the form of an undead brain eater.  Gather up a few of them, declare yourself the King Zombie and hit the streets in style.

Sure, they’re small at 7.75 inches.  Heck, that cheap plastic construction will probably break after being stepped on.   Who cares, though?  They walk, make scary sounds and look like they haven’t slept in weeks – just the perfect minion for a mini-zombie attack.

There’s no video of the Remote Control Zombie at work, so I’m not sure how fast the thing can go.  Based on the joints and the size of the figure, though, you can probably begin your march out the door by 9PM and reach a couple of blocks by 3AM.  Again, who cares?  You’re lumbering through the streets with an army of miniature animated corpses – how much cooler can life get?

Here’s a good idea: after you’re done with them, put the toys back in the box and you’ve got instant Christmas gifts just in time for the holidays.  The set comes with a brain-shaped wireless remote, operates with three AAA batteries and is available for $25 apiece.