Build Your Own New York 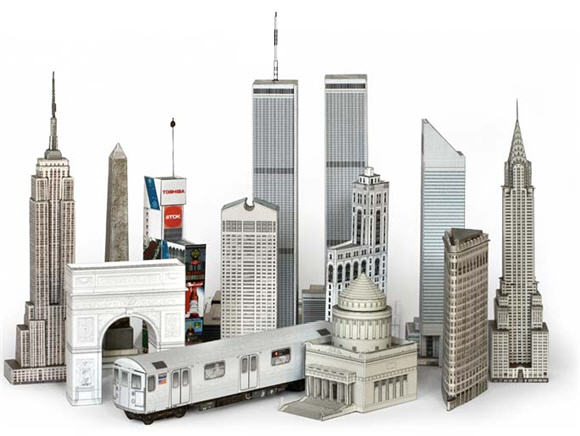 Want to play overlord to an entire metropolitan city?  Construct a miniature version of the Big Apple with Build Your Own New York, fantastic-looking papercraft models of some of the city’s most popular landmarks.

The pieces each come as postcards, measuring  4-5/8 x 6-3/4 inches.  Every sheet comes inclusive of all the elements needed for one model, along with a description and instructions on how to put them together.  Landmarks available in printed form consist of the Empire State Building, the Flat Iron Building, the Citicorp Building, the AT&T Building, the Washington Memorial Arch and the IRT Train.

Apart from the postcards, the website also has downloadable PDFs of other scale models that you can print and construct, in case you want to build more of the city than the limited choices they are selling.   Sites include the World Trade Center, Cleopatra’s Needle and One Times Square.

Based on Geoffrey Heighway’s “Micromodels” from the 1950s, the current set of scale paper replicas were drawn by Matt Bergstrom and printed by the Wurlington Brothers.  If you’ve ever fancied shooting a “Godzilla Attacks New York” movie for your YouTube amusement, this is as cheap of a set as you can get.  All you need is a slightly larger Godzilla robot and you’re ready for destruction.

You can pick any postcard you want or just buy the entire set, since they only cost $1.50 each.

[Build Your Own New York via GadgetLab]