Bullet 580 Brings Back The Blimp… And It’s Huge 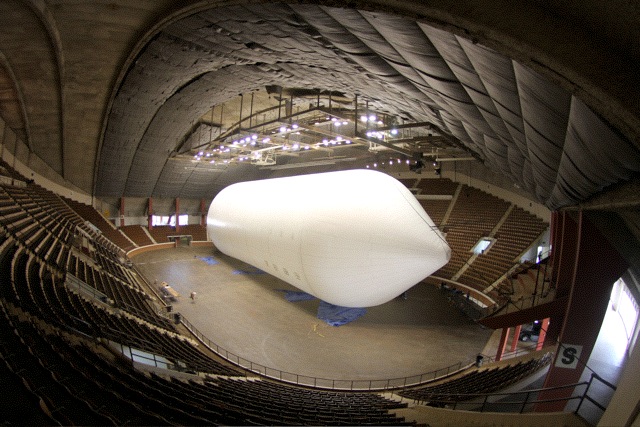 Blimps are back. Well, not really. But something inside me wants them to be when I saw 21st Century Airships’ Bullet 580, now officially the world’s largest blimp ever.

Offering a more cost-effective alternative to fixed-wing aircrafts, the airship can stay at high altitudes (up to 20,000 feet) for extended periods at lower costs. Coupled with large cargo capacity and heavy lift (up to 2,000 lbs of payload on the outer envelope), it allows for plenty of applications in science and military operations. Scientists can use it to attain near-space conditions, military personnel can use it as an observation base and you can use it to finally fulfill the dream of flying inside a giant balloon.  Weeee.

The Bullet 580 is huge at 235 x 65 feet (l x d), requiring at least six hours of pumping with helium before fully inflating. Built from kevlar material, the envelope boasts durability that’s ten times stronger than steel, despite being one-sixteenth of an inch thick. As an airship, it can take-off and land vertically, as well as thrust forward at up to 80mph, with an ideal speed of 35mph. It can be flown remotely or with a crew in tow.

Currently scheduled for testing in the summer, the Bullet 580 will be available both for sale ($8 million) and for rent ($300,000/month). We don’t know if they’ll sell this to private individuals, but with the vertical landing and take-off, this sounds so perfect as a hobbyist aircraft. I mean, you can keep it, fly it and land it in your backyard (assuming you have the lot space). Absolutely awesome.