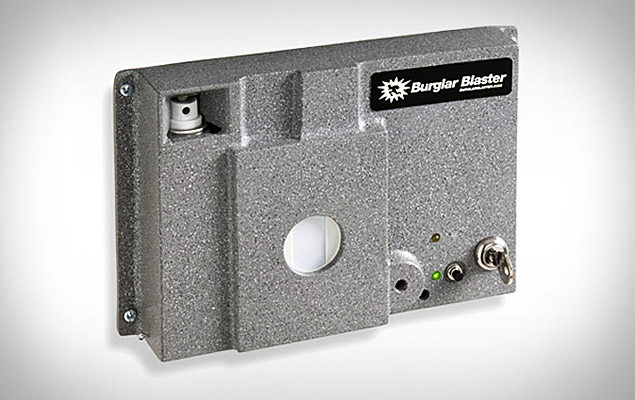 We love home security systems – the nastier, the better.  The Burglar Blaster squarely meets the “nasty” criteria, unloading a blast of pepper spray to blind intruders it detects trespassing on your private space.

Offered by Bed Gun Safe, the burglary deterrent is a self-contained unit that does the monitoring, detecting and attacking all on its own.  You don’t even need to wire it to your home’s electrical system – it’s got an integrated “C” cell battery that can power it for up to four years before requiring a replacement.  That means it will keep your home protected, even during a power outage.

The Burglar Blaster uses a passive infrared detector that can watch areas of up to 2,000 square feet.  Armed with a pepper spray (you can easily replace it with new canisters when needed), it unleashes four ounces of the vision-impairing mixture when it detects intruders within range.  To avoid accidental setting off, it comes with a programmable time delay of anywhere between 0 to 40 seconds, giving you just enough time to disable it using the concealed power switch.  While waiting to spray, it will sound off with a non-directional (so intruders won’t easily figure out where it’s coming from) high-pitched warning tone.

It comes housed in a high-strength, cast aluminum alloy shell that can be painted over to fit into any home design.  Other features include a 12V output (for use with options and accessories), 90-second time delay and a key switch.

You gotta admit – pepper spraying burglars does sound more fun than just sounding off with a loud noise.  Personally, I’d prefer an anti-burglary system that shoots ninja stars, but the Burglar Blaster will do.  It’s available for $600.