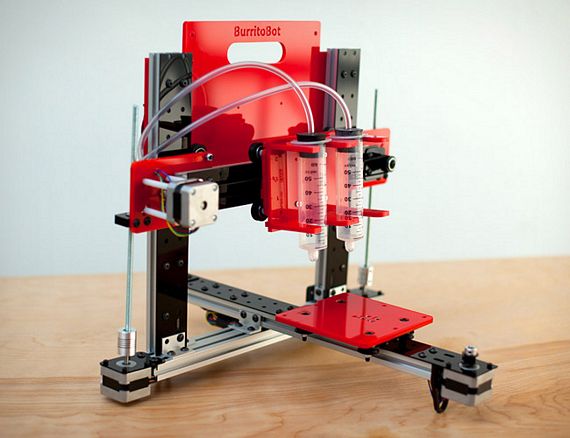 We’ve seen little robots that can leap over walls, tow full-size cars and even eat dead human carcasses for fuel.  But we don’t really need those. We just want a robot that can make the perfect burrito every single time. And the Burritob0t is just the automaton for the job.

Made by NYU student Marko Manriquez, the robot is actually a 3D printer of sorts. Instead of printing 3D designs into real-world plastic shapes, though, it’s designed to print burritos.  Seriously.

Able to produce real, edible (and by edible, we mean you MIGHT be able to swallow it without throwing up if you really, really try) burritos in minutes, the Burritob0t adopts 3D printing technology to almost certainly crappy fast food.  How?  By simply replacing the plastics  shot out by the extruder with burrito ingredients in paste form.  That’s right, your burrito’s insides will be entirely paste-like in texture — you’ll need to power-blender everything from rice to ground beef to leafy greens into a slushy pile.  Sounds inedible?  Definitely.  Want to try it at least once?  Maybe one bite.

Like a regular 3D printer, you design the kind of mess your burrito will look like using a  computer modeling program, which is then converted to instructions the printer can understand once you commence bringing it to life.  When you think about it, the whole thing is actually very gross.  But probably really, really fun.

Marko originally made the Burritob0t to fulfill his thesis requirements for NYU’s Interactive Telecommunications Program.  Having done that, he’s looking to market a DIY open-source kit of the build that will let every burrito fiend/maker to put together their own in the near future.